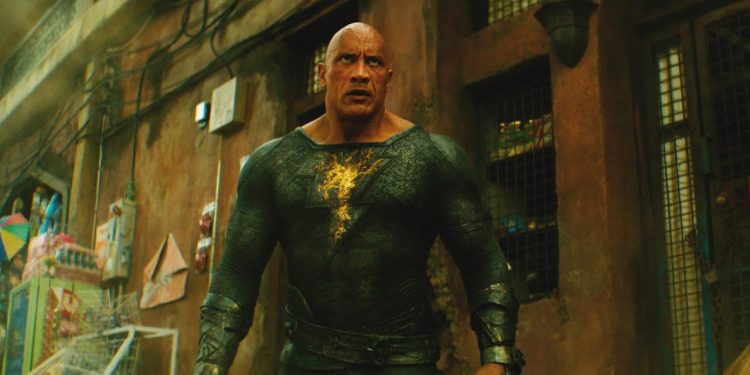 Synopsis: Nearly 5,000 years after he was bestowed with the almighty powers of the Egyptian gods-and imprisoned just as quickly-Black Adam is freed from his earthly tomb, ready to unleash his unique form of justice on the modern world.

After so many years (like 15), of Dwayne Johnson teasing a Black Adam movie, the movie has finally come out. And it's fine. The bar was extremely low for this film and despite all it's problems, it clears that bar. So there's that. This film can be explained by looking at its strengths being The Rock and its weaknesses are Dwayne Johnson. Here's what that means. For Black Adam to be any type of success it needed to be loud, violent and talk a big game. That's WWE The Rock. And that's what we got in the promotion of this film and even what the film does on screen. It's not interested in making too much sense but rather rocketing you from scene to scene with the promise of "The baddest man alive" doing his best "Bad Superman" impression. Where this film falters is everything else and that's because of Dwayne Johnson. Not because Johnson himself does anything really wrong but rather this seems to be a recurring theme with most films that case him. See, Johnson is such a big personality and can act well enough that for lazy directors and writers, they can just plop him into a movie and let that carry it enough to a popcorn film status. And that's what happens here in Black Adam. Surprisingly this film actually could have been good or even great had the things around Johnson been treated with some kind of care.

Aldis Hodge is a great casting for Carter Hall but the film doesn't even try to give him a script that really utilizes his talents. Pierce Brosnan's Dr Fate is turned into if you ordered Doctor Strange on Wish (and he shouldn't have been). It just feels like the whole JSA angle was put into this film to be "bad ass" but not to actually make it work for the story. Throw in terrible song choices for scenes and an overuse of slow motion and what we get here is a mid film that is disappointing because it could have been so much more.

Again, the bar was low for Black Adam. It did what it needed to do which was not completely end in disaster. But who knows what the future of DC films is because even if Black Adam wasn't a complete clusterfuck, WB Discovery clearly is.