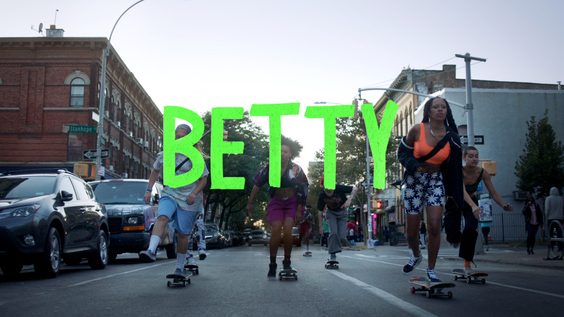 Brandon8
Joi8
Ro8.5
Effortlessly cool, BETTY grounds itself in its rebellious roots. At its core, the series lets the girls from Skate Kitchen do what they do best.
8.2

A “betty” is known as a woman who dresses like a skateboarder but doesn’t skate. Her sole purpose is to be a hanger-on in the often male represented skate community. HBO’s BETTY, a comedy created/directed by Crystal Moselle, takes this concept and kick-flips it on its head. We follow the all-female Stake Kitchen collective throughout their misadventures in New York City.

BETTY is a continuation-slash-reboot of 2018’s Skate Kitchen, with the origin story of Skate Kitchen getting remixed to fit the series. Camille (Rachelle Vinberg) served as the protagonist of Skate Kitchen. But in BETTY, the other girls - Indigo (Ajani Russell), Kirt (Nina Moran), Janay (Dede Lovelace), and Honey Bear (Kabrina Adams)  - pull equal weight in character development.

The first three episodes of the series lay the bricks of the girl’s arcs. The hard pivot of the story from the film takes a while to calibrate in your mind if you’ve seen the film before. But once it does, their love of skating paired with their story growth ends beautifully.

At its core, the series works because it lets the girls from Skate Kitchen be themselves at their best. The originality of these characters - loosely based on the girl’s personalities -  make the story engaging. The camaraderie of the group was the strongest aspect of Skate Kitchen. In BETTY, this camaraderie continues, albeit in smaller groups. The goal seems to give the girls space to get micro-moments together. But there’s an opportunity for later seasons to deliver the visual group shots we received in the film.

There also needs to be more highlights of the girls skating in the series. Vinberg does the lion share of skating tricks, and it’s not due to lack of talent of the other members. Outside of casually gliding on their boards, we don’t get slow and sweeping vignettes from the other main casts. These are young women with enormous skill. To under utilize is unfortunate, and makes you hope for improvement if there’s a season 2.

Effortlessly cool, BETTY grounds itself in its rebellious roots. The lives of skaters are one of intrigue and adventure. Adding the complexity and sisterhood of teenage girls to this mix elevates it to another level. With unpredictable but delightful moments, BETTY grabs a hold of you and takes you on this magical journey.