Bernie or Bust is All About Privilege 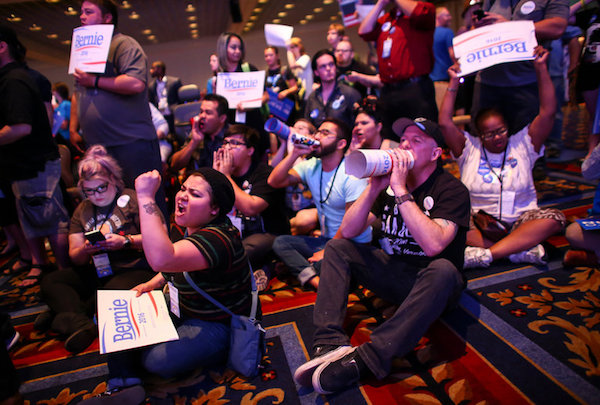 Despite what he and his supporters may want you to think, the Bernie Sanders campaign is done. This campaign has been over for quite some time, since the blowout in South Carolina in fact. I’ve written about the exact reasons why in a previous article. From the ashes of Bernie’s campaign has come a small movement born of privilege (among those who have canonized Bernie) called ‘Bernie or Bust’.

This movement lives in a space of constant contradiction. The system that Bernie agreed to when he entered the race as a Democrat is “rigged”, however what his supporters hope to do is rig the system to make sure that a candidate that has not won the popular vote, nor the necessary number of delegates, wins the nomination. They believe that Superdelegates are undemocratic, yet relish the results from caucasus (which could be seen as undemocratic by their very nature). In Arizona, Bernie Sanders supporters yelled and screamed about voter suppression in a state that they believe their candidate should have won. However, elections in states like North Carolina and South Carolina, where voter disenfranchisement, suppression and intimidation happens regularly were met with silence from these same supporters. The system is “rigged” and their way of fixing that is by stating that if Bernie Sanders is not the Democratic Candidate (a position he has not earned in any way) they will sit out the general election. Thus, leaving those of us without the safety net of systemic racism to fend for ourselves under a potential President Trump.

One of the main points I’ve heard is the idea that a two-party system is not working when it comes to the addressing the needs of the American public. I don't disagree. A two-party system lends itself to people finding the lesser of two evils. The candidates that they can align with on some issues, and not others. Often times, these are candidates that won’t go far enough on one issue of importance but simply do no harm on another. So, I don’t disagree with this viewpoint.

The problem is how the argument against the two-party system is being used. I hardly see this used when talking about how neither Democratic candidate has truly addressed the state of emergency that is Black life in America. I haven’t seen this used to highlight how neither Democratic candidate has addressed the mass death among Trans* individuals in this country. I really haven’t seen this point used to address anything other than why Bernie supporters are going to “take their ball and go home” if their preferred candidate is not the Democratic nominee. The reality of the situation is that we have the system we have. Not engaging in that, especially this year, has very grave consequences on the future of this country and particularly on the future of those living in marginalized communities.

The main problem with the core arguments of “Bernie or Bust” is that it portrays a level playing field that does not exist. White liberals in the “Bernie or Bust” movement have spoken about how great a Bernie presidency would be for marginalized communities. They’ve spoken about their concern with the state of marginalized communities. But in the same breath they defend the right to not vote for any candidate not named Bernie. These two positions are in opposition. Democracy is compromise. In its very nature it is weighing ideals and voting upon which you believe are most important. Often times, it’s weighing the ideals that could best help others and making decisions to try to better their lives. When people without children vote for bond measures that raise their taxes in order to provide more funding to better schools, they are doing just that. It is a liberal and progressive ideal that you use your vote to better life for as many people as possible especially those who are most marginalized. It’s an anti-racist organizing tool to utilize your privilege to help those less privileged, not to leverage it in order to get more of what you want.

Another part of this movement that really needs to be addressed is the fact that only those with massive amounts of privilege can engage in this thinking. The white liberals involved in “Bernie or Bust” are not well-meaning progressives that are willing to risk it all to get Bernie thrust into the position of Democratic nominee.These people know that they are risking nothing by playing chicken with our political system. These are very likely the same individuals who stated that Black Lives Matter had lost their support by having demonstrations to push Bernie to address issues affecting the Black community. The system is rigged and it’s rigged for white people, those involved in “Bernie or Bust” understand that and are wrapping it around themselves like a protective blanket.

A Trump Presidency does not hurt white people as much as it hurts marginalized communities. While a white person may be able to find common ground with the different groups that would be hurt by a Trump presidency, they do not belong to those groups. The struggle for healthcare is not the struggle of those in this movement, nor is the struggle for housing in formerly red-lined areas, or the struggle of worrying that a potential employer or landlord is racist. The major struggle is against systemic racism and the difficulties that creates, up to and including loss of life. And in this case, for those involved in “Bernie or Bust” their privilege is stopping them from fully empathizing with these struggles. So, while they may want to lump everyone they know into “the working poor” and ignore the realities of race and how marginalized communities fare in this country (in an effort to reposition the conversation in a light favorable to Bernie) the reality of the situation is that white people have a better chance of succeeding in all facets of life, be it healthcare, education, or rising wages, regardless of who is in the Oval Office. Since Sanders supporters are not going to get what they want, they want to go home and watch the rest of the world burn from the comfort of their house because in reality, their privilege assures that they won’t be touched by the flames.

The “Bernie or Bust” movement is trying to circumvent that and the very ideals that progressives state they stand for. Bernie Sanders had just as much of a shot at convincing the Democratic base to vote for him as anyone else did, and we’ve seen time and time again that (quite frankly) not enough people want to vote for him. To overturn the apple cart, and use your privilege to try to force your preferred candidate to the nomination is not what our country needs. It’s not the right thing to do, it’s undemocratic, goes against the ideals of anti-racism and would pass no progressive purity test. I’m looking forward to “Bernie or Bust” fading into obscurity much like the actual Sanders campaign.