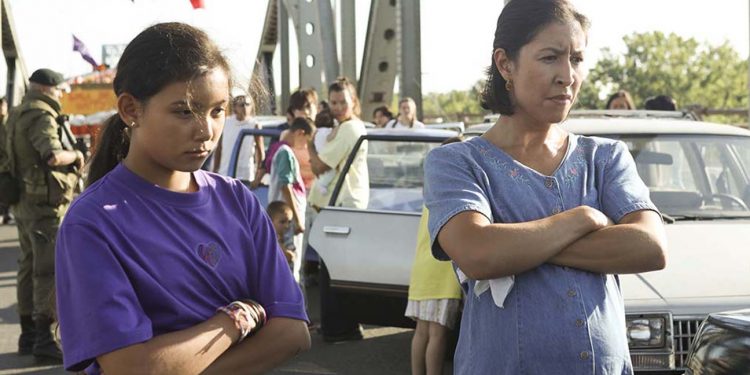 Beans is a semi-autobiographical tale from director Tracey Deer that centers on her experience as a 12 year old Mohawk girl during the 78-day Oka Crisis standoff ini 1990. This is the kind of film that will illicit a lot of emotion. First off, the real-life events this film covers are based on a dispute over the expansion of a golf course into sacred indigenous lands. It’s infuriating to know that people have to fight for their culture to be respected and that others think so little of it that they would bulldoze it all for a golf course. Secondly, the racial animus displayed against the Mohawk people fighting for their culture feels very relevant and relatable to the reactions we see to protests today. It’s a sad reality that as much as things change, they also stay the same.

It’s important to understand that the point of view of this film is from the young lead Kiawentiio who plays Beans. This makes this film about more than just the standoff but how the impact of what it was like as a child to see their culture defended. You can tell that Deer put a lot care into this film and that it was very personal to make. Beans is not only coming to terms with the reality of how people outside of her community very her and her people but also her own natural growing pains that come with growing up as a preteen.

While the subject matter of Beans is set from a real-life event that happened in the 1990’s, it’s still very relevant to today in an almost infuriating way. To boost the impact of the film, Deer uses actual news footage from the standoff. The result is really powerful moments that hit harder because we see real footage.

Beans is a film that's worth checking out. It opened at the Toronto Film Festival in 2020.