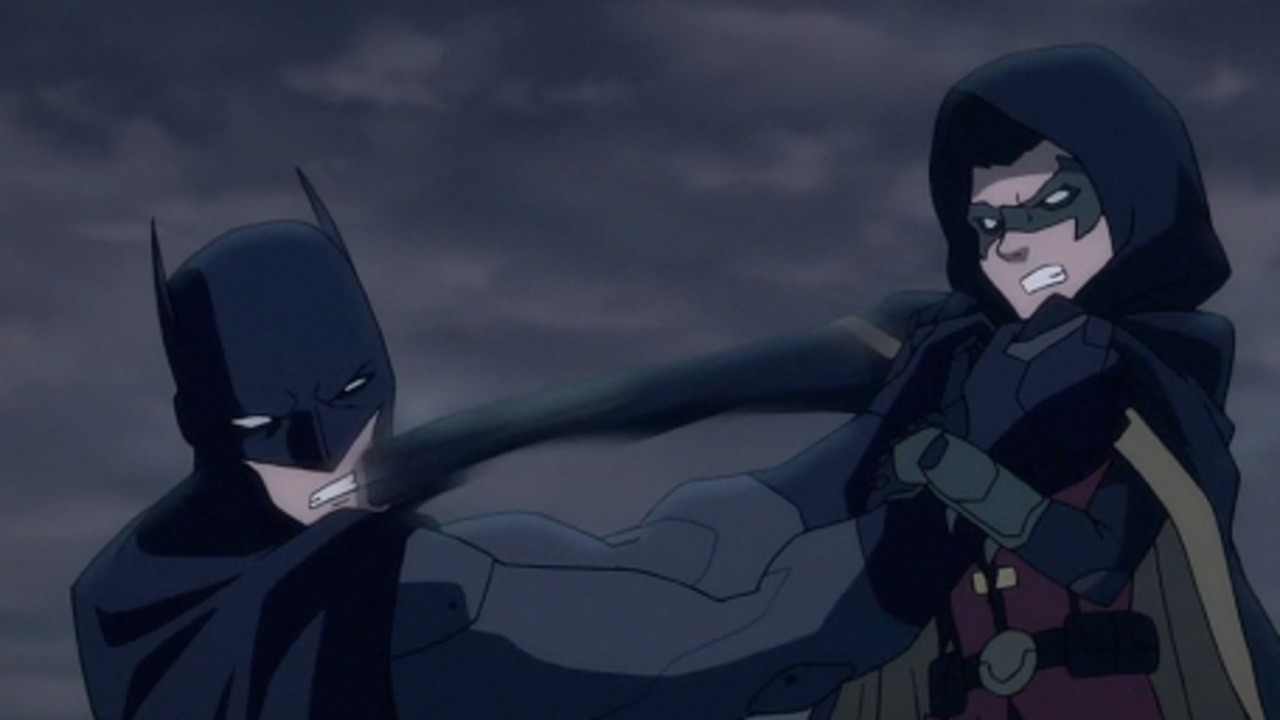 I remember reading how some comic book readers didn’t like Damian Wayne. Some folks didn’t like him because he was too arrogant. Others just didn’t like the idea of Batman having a son. I never paid it much attention until I started reading Batman myself. Now? I love this little guy. Bold Statement to follow:

Damian Wayne is my favorite Robin.

I know that seems crazy but this kid is really awesome to me. He’s young and cocky like Jason Todd but as skilled as Dick Grayson as Nightwing. The best part about him? He’s confident. He knows he’s the rightful heir to Batman’s Cape & Cowl and he has no problem letting everyone know it. Normally that arrogance is undeserved but this is not only Bruce’s son but a kid raised by the League of Assassin’s. His skills can back up most of his talk. 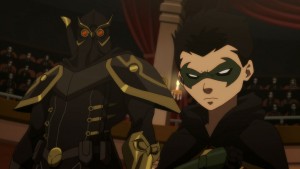 Batman vs Robin is a combination of storylines. Its actually a misleading title. While Bruce and Damian’s relationship is front and center in this, as well as a mini-fight between the two in costume, this is a very condensed version of The Court of Owls/City of Owls storyline from the books. Truth is, there are significant changes to the Court of Owls storyline and I think it’s for the better. DC’s been doing a great job with their animated line of movies but I think one thing that’s hampered them is that they’ve been trying to do direct translations. Batman vs Robin is a bit of a change from that. I feel as if Jay Oliva took The Court of Owls storyline and used it to tell a unique story about Bruce and Damian coming to terms with their father/son relationship. While it seems an odd storyline to connect that to, when you think about it, it makes sense. In City of Owls, the follow up to Court of Owls, Bruce ends up battling Talon who is claiming to be his brother, Thomas Wayne Jr. In a way, that story turns into Brother vs Brother with Talon spending a lot of time talking about living in Bruce’s shadow. In Batman vs Robin, there’s still a family dynamic but it’s more about Damian finding his place. Talon tries to recruit the young Robin to take his place as Talon is battling with his own sense of trying to fit in with the Court. It’s a recurring theme of “belonging” that is the heart of the story being told here and I believe that is what makes this a better movie than Son of Batman. There’s also an interesting dynamic between Bruce-Dick-Damian. Dick Grayson is the first Robin and adoptive son of Bruce but Damian is actually blood. Its a source of friction between Dick and Damian and it also causes Bruce to realize he needs a different approach with Damian. The ending of this movie also doesn’t go the route you would think but I think it works based on the fact that Damian is different from other Robins. The title Batman vs Robin is less about a physical battle and more about the battle between Bruce and Damian to figure out their relationship. Bruce has to be more of a father to Damian than he was with other Robins because Damian is actually his son and needs a father. It's something that puts Bruce in a vulnerable position he's not used to.

The voice acting in solid but I think I'm not alone in saying that it's going to take some time getting used to new voices taking over for classic characters. I’m still getting used to Jason O’Mara as Batman. He does a solid job but as someone who grew up with Kevin Conroy, it’s hard to get his voice out of my head. Conroy actually does get a small role in this movie as Thomas Wayne. Stuart Allan voices Damian Wayne and does an excellent job. He also voiced Damian in Son of Batman but I feel like he was given more range to work with in this movie. He gives us cocky, arrogant Damian Wayne but we also get plenty of vulnerable kid Damian. I think that was something that was missing from Son of Batman. Damian is still a child and while he’s definitely not your typical child (being raised by the League of Assassin’s will do that), he still has his moments where he’s vulnerable. Allan does a great job switching between the two. Sean Maher voices Nightwing and also does a solid job. Again, like with Damian, I felt that this movie gave him a bit more to work with. I thought the weird Dollmaker sounded familiar and the credits reveal that it was actually Weird Al Yankovic as the voice. I thought that was pretty amusing. 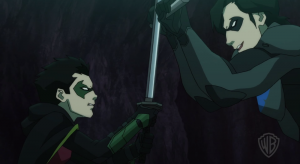 Visually, I like the animation style for this movie. There’s plenty of action sequences. We finally get that Damian vs Nightwing sequence we were cheated out of in Son of Batman (and some hot ether bars from Damian) as well as a back and forth fight with Batman and Damian. They also included one of my favorite scenes from City of Owls, Batman and his “Get the Hell Out of My Cave”. All in all Talon and the rest of the court provide some serious challenges for Batman, Nightwing and Robin and lead to some bloody and brutal fights.

I know we’re getting tired of DC Animated relying so heavily on Batman for their movies but I think Batman vs Robin is one of their better offerings. I was a bit underwhelmed by Son of Batman so I was a little worried about this movie but I find it to be a much better overall movie. I feel as though the characters of Damian and Nightwing are fleshed out a bit more and we get to see more range from them. And Damian Bars are my new favorite thing. I think Batman vs Robin is an excellent addition to DC’s animated lineup.

[divider]
Special Features
This is my first time using iTunes digital copies for a BluRay release and I have to say that I’m impressed. Unlike when I would get a digital release on Amazon, iTunes has an actual menu for your special features and you can access them like a BluRay. I watched the digital iTunes copy on my Apple TV but the menu is also available on your computer through iTunes. This allows you to pick and choose which special feature you wish to watch.

[tabgroup]
[tab title="Gotham City’s Secret: The Mythic Court of Owls"]This special featured goes more into the origin and mythology of The Court of Owls. Writer Scott Snyder goes into what inspired him to create the Court. Snyder talks about the idea of creating Gotham as a character itself and using that to make a great Batman story. What I love about this special feature is that, DC animated films are short and can never tell the whole rich history. So this feature (which is about 30 minutes) puts some of that depth back into the Court of Owls. This special feature really goes into the thought process of creating the Court, what inspired their creation and why its a scary thought.
[/tab]
[tab title="The Talons of the Owls"]
This feature focuses on the Talons of the Court of Owls. It really digs into the creation of the assassin’s of the Court of Owls. The idea was to kinda of have assassins that were just as skilled as Batman. What I liked about the Talons in the comics and this movie is how formidable they are.They represent a real threat and challenge to Batman. Snyder and artist Greg Capullo talk about the design of the Talon and why they don’t use guns. I love features like this because they really show how much thought goes into designing characters that sometimes we the readers or viewers don’t even consider. There's an interesting comparison between the Talons being raised to be assassin's and child soldiers we see in real life.
[/tab]
[tab title="Justice League: Gods & Monsters Sneak Peak"]This is a sneak peak at and Elseworld story with the Justice League being drastically different from what we’re used to. What I like looking at this is that it reminds me of the different world that was created with Flashpoint. Also they’re bringing Bruce Timm back and I think that’s going to be an attractive fresh look for many people. Superman is the son of Zod and raised by migrant workers. Batman isn’t Bruce Wayne and is a vampire. Wonder Woman has ties to Darkseid. I think it’s a radical change from what we’ve seen from DC Animated and I’m very intrigued by this movie.
[/tab]
[/tabgroup]