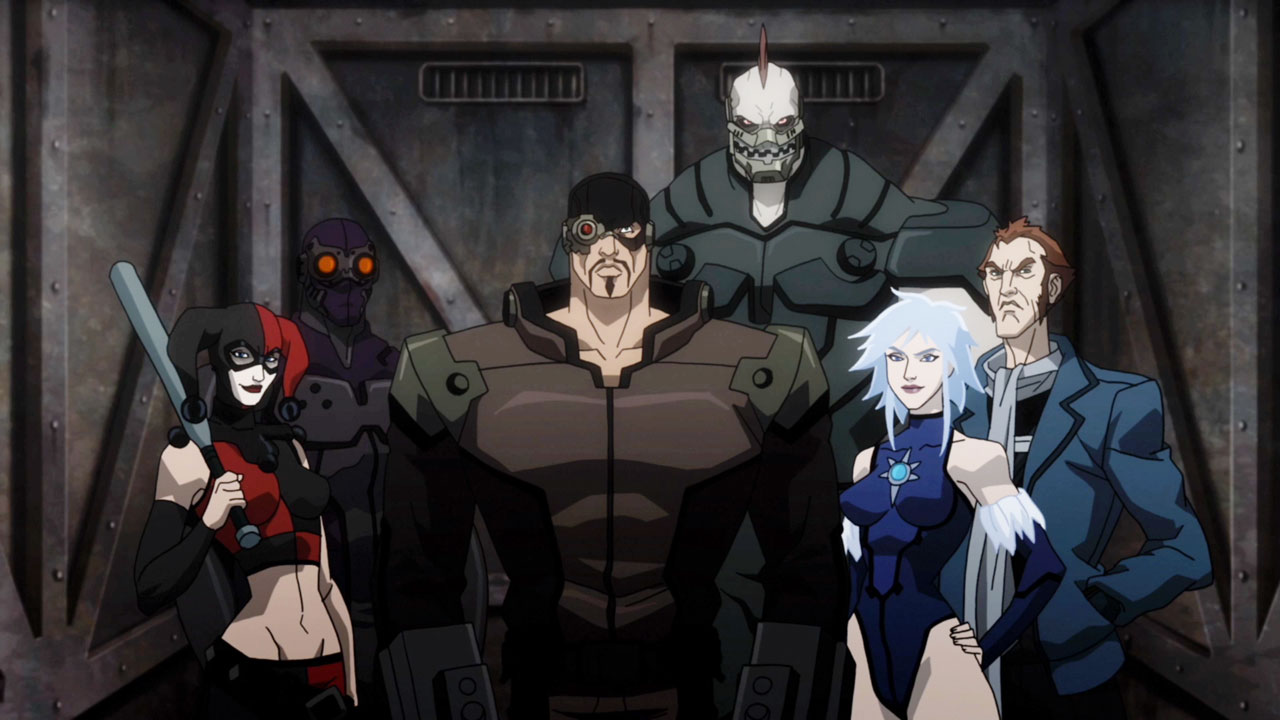 DC Entertainment/WB Animation have been on a roll with these animated comic book movies for a while now.   Some of their movies are definitely better than others but one thing is for certain, they're all miles above what Marvel is putting out. Earlier this year DC put out the first movie in their DC Cinematic Animated Universe, Justice League: War. They also announced Batman: Assault on Arkham, which would be based off of the Rocksteady Arkham games. I wasn't sure how that would go but I trust DC with animated film like I trust Marvel Studios with live action ones. They don't disappoint. Batman: Assault on Arkham is no different. It’s a fun movie to watch and a great addition to DC's lineup. 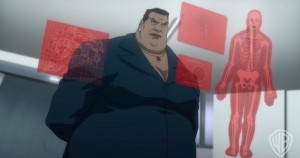 The first thing to realize about Batman: Assault on Arkham is that it's technically NOT a Batman film. This should be welcomed news to folks who might be suffering from Batman fatigue when it comes to DC movies. The focus of this film is actually "Taskforce X", better known as The Suicide Squad. I think the marketing department realized having “Suicide Squad” in the title might be pushing the luck DC Animation has been having with getting its animated films rated at PG-13. So instead they threw “Batman” in front of the title because despite how brutal the character has been portrayed, it’s Batman and who doesn’t love Batman? If you played the Arkahm Origins game then you know the after credit scene *SPOILER ALERT* was involved Amanda Waller approaching a jailed Deathstroke talk about forming a "squad". Assault on Arkham takes place sometime after Origins but before Asylum. While Deathstroke is not on this Suicide Squad (one can hope maybe we get him in the future), we do get a few familiar faces as well as some not so familiar. The two biggest names on the Suicide Squad are Deadshot and Harley Quinn. 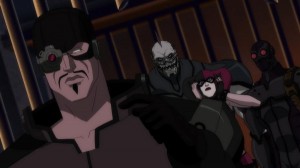 I don’t think it’s by accident that Deadshot was a big part of the Suicide Squad introduced on Season Two of Arrow this year (With Harley Quinn making a voice cameo) and now DC is deciding to do a Suicide Squad animated show. Floyd Lawton aka Deadshot (voiced by Neal McDonough) is pretty much the “leader” of the Suicide Squad in this mission. That’s the interesting dynamic about the Suicide Squad. It’s made up of individual villains that either usually more used to running solo (or with other villains not in the squad). So there’s a good amount of distrust and dysfunction amongst them. So while Deadshot is “in charge” there’s really no formal leadership structure. I think that’s one reason why I enjoyed this movie so much. This team that Amanda Waller has put together isn’t as much of a team as it is a loose collection of asshole criminals that are forced against their will to work together. Best thing is, this isn’t some feel good story where these people realize they’re stronger if they work together and respect each other. Whereas when we get Batman & Robin working together, we got a well-oiled machine, with the Suicide Squad violent, egomaniacs with their own agendas. Watching the team dynamics completely break apart and the ‘every man (or woman) for themselves’ mentality take over makes for a pretty fun ride. 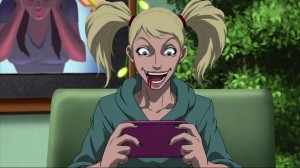 You have to love Harley Quinn. For a character that could have easily stayed a “throwaway” character on the Batman Animated series, she’s pretty much grown into a fan favorite. She’s the crazy chick you can’t get enough of. There’s a subplot in this movie involving Harley Quinn and the Joker that reminds me of a woman who can’t get enough of her abusive lover. It’s sick and twisted and also, classic Joker/Harley Quinn. Add in a “love triangle” with Deadshot-Quinn-The Joker and you get the perfect combination for a beautiful mess. 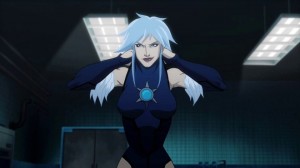 Lawton and Quinn are the main focus here which should be obvious when you see the other names in the Suicide Squad. Rounding out the rest of the Suicide Squad are Killer Frost, King Shark, Captain Boomerang, Black Spider and KGBeast. If you’re asking yourself “Who are some of these people?” realize that the whole point of Waller’s Suicide Squad is that these criminals are expendable and they all don’t make it to the end of this movie alive. Hell, one of them doesn’t even make it to the first mission. That should tell you all you need to know about how this movie is going to go. We do get some cameos of other more well-known Batman villains, but most of them aren’t given anything more than a short scene (With the exception of the Joker). Despite using some of the lesser known characters, I still felt myself caring about them and hoping they’d make it out alive.

As I’ve mentioned before, while this is based off of the Arkham videogames, Batman is more of a guest appearance. It’s not until near the end that we start getting more of Batman. Even then, Deadshot is the focus. I actually liked this way of using Batman as more of a cameo appearance than the main player. That’s the great thing about Batman, the character is so dark and mysterious he doesn’t even need to get major screen time to still be enjoyable.  Fans should rejoice in the fact that Kevin Conroy is back voicing Batman while Troy Baker is still proving to be a great replacement for Mark Hamill as The Joker.  Also, I want to point out that they decided to go with the err...larger...Amanda Waller over her skinny, sexy counterpart.  While I don't mind either version, I know some folks weren't exactly happy with the redesign of Amanda Waller and they decided to go with her more classic look in this movie. 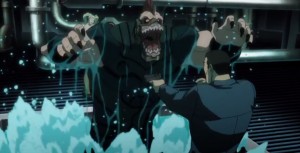 This movie carries on the DC Animation tradition of trying to get away with as much adult content as possible in an animated film. I’m actually not sure how they’re able to get away with it. While they don’t really show much, there’s actually a sex scene in this movie. Then there’s the obvious violence. It’s actually funny. At one point at the beginning gof the movie Waller tells Lawton and the rest of the squad to keep their operation quiet and with minimal collateral damage. I actually chuckled when she said that because I knoew there was no way that was going to happen. People catch it BADLY in this movie. There’s a few times people’s heads get blown off. King Shark takes out a few people brutally. One of the cool things about this film is that since it is in the same universe as the games, the fighting style of the game has been translated into the film. It’s cool seeing Batman fight with a character and go “hey….that’s how I fought them in the video game”. Same goes for the look and feel of some of the iconic locations in the film. Again there’s a sense of familiarity when there’s a location shown in the film that players of the video game remember visiting/fighting through in the game.

I really enjoyed this film and I wouldn’t mind seeing more films in this Arkham continuity. Sure, DC runs the risk of overexposing Batman, but with a film like this, I think they can do a good job of including Batman but still providing the meat of the story & action with other characters. I’ve mentioned it before but Batman has a pretty awesome gallery of rogues. Each is pretty interesting in their own right and can have a solid storyline. I was thoroughly surprised by how good Batman: Assault on Arkham turned out and I am definitely looking forward to seeing more movies from this continuity.

Once again I’m reviewing the Amazing Instant Video release of this movie versus the hardcopy BluRay copy. Honestly, there’s not really a lot of reasons why you shouldn’t try this option. First off, the Instant Video option of this movie was released several weeks before the BluRay version. You also get most of the Bonus Features. It seems like the only thing that was missing from the Bonuses on the hard-copy was the Commentary. So if you’re fine with missing that but getting everything else, the Instant Video version of this release is well worth it.

[tab title="Arkham Analyzed: The Secrets Behind the Asylum"]
By now you should know, I love the extras on BluRays & VOD releases. They add so much more to not only the movie, but the overall ideas and history of things connected to the movie. This featurette focuses mainly on the history of Arkham Asylum but also goes into some of the psychology of not only Batman but some of his villains. It talks about the history of Batman and how it got progressively darker around the time of the Vietnam War. The name of Arkham came from HP Lovecraft and Len Wein created the backstory and history of Arkham Asylum. I really enjoyed the discussion about how no one really gets better in an asylum and that their only real purpose is terror. It points out how in Batman lore, there’s plenty of examples of perfectly sane characters who end up losing their minds and becoming evil due to Arkham Asylum.[/tab]
[tab title="The Joker’s Queen – Harley Quinn"]
Harley Quinn has become such a fan favorite and major piece of the Batman franchise it’s easy to forget that she was actually introduced in Batman The Animated Series in 1993. Think about how amazing the character has come? From what could have been a throwaway character in a cartoon to a major piece in the DC Universe. This is a great featurette for watching to go through the history and development of this character.[/tab]
[tab title="Sneak Peak at Justice League: Throne of Atlantis "]
A sneak peak of the next movie in the DC Animated Universe features Aquaman. I could go into a lot of details and talk about where they’re going with this but here’s all you need to know: Rosario Dawson is voicing Wonder Woman. *drops mic* [/tab]
[/tabgroup]