‘Barbarian’ May Just Be Where Tropes Go To Die…Viciously 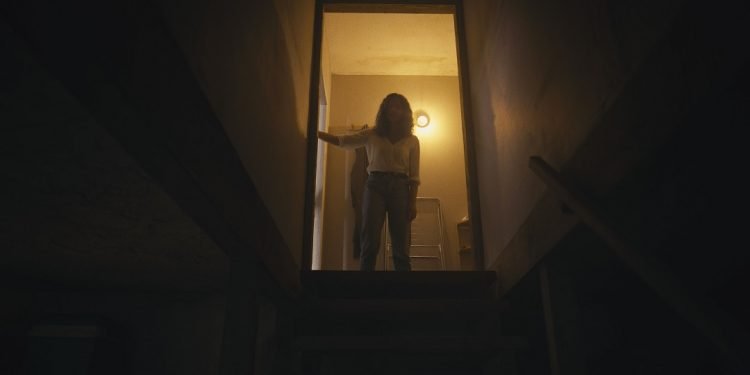 Barbarian's opening sequence falls squarely in line with the trailer. Tess (Georgina Campbell) makes a late-night arrival to her rental only to discover Keith (Bill Skarsgård) already inside and settled in for the night. After a short exchange reveals each booked the rental in good faith, Keith offers Tess the bed. There's a torrential downpour and no alternate lodgings available. So despite her misgivings, Tess agrees to take the bedroom. In what might be an overkill of red flags, Cregger throws Tess and Keith together in a pitch-perfect setup of "she can't possibly be this stupid" trope. Buckle up because Georgina Campbell absolutely commits to proving that she can, in fact, be an increasingly bad decisionmaker. Plus, you can't even forgive her because she tells you up front, that she knows better. As first acts go, Barbarian delivers one that's uncomfortable, insidiously engaging and only makes promises it can keep.

Running Away is ALWAYS an Option...

Clocking in at one hour and forty-two minutes, Barbarian is a decidedly modern take on a stack of horror tropes (hat-tip to all Final Girls) offered with some old school, locked-room mystery, flare. Cregger's roots in sketch comedy work in the storyline's favor adding an element of absurdity that further pushes against audience's boundaries. You'll find yourself laughing at the most inopportune times. Thankfully, this story doesn't ever go where you think it will.

With a fresh approach that savvily applies tried-and-true cinematic horror movie sleight of hand, Barbarian reinvigorates damn-near every horror visual trick. Just as you think you've got a handle on who to root for, a savvy scene change, long ever-increasingly terrifying sequence, or hard transition sets you back on your heels. Then deconstructs your assumptions bit-by-bit. While your milage may vary, Barbarian does not disappoint even when maybe it should. It thrives on that frenzied denial that rarely snaps us out of utterly stupid or horribly wrong actions before there's no taking it back. Barbarian will test your for tolerance for detestable characters. And then things get really horrifying.

This isn't a thinly drawn plot intended as just a vehicle for social commentary on the state of capitalism, gentrification, police/community relations, and dating dynamics. Cregger leans into the willful blindness people rely on to convince themselves to keep pressing forward. This talented ensemble is unexpectedly charismatic and constantly stress inducing. Barbarian is a full throttled horror movie. One that refuses to ignore the reality of the world (and neighborhood) it's set in. It's impossible to delve into the twists and turns without spoiling. So let's just say, if the rules exist for a reason, then Barbarian never got the memo.

Listen as Ro and Kriss dig into what worked (or didn't) for them about Barbarian.

Zach Cregger's first feature, Barbarian, blends decidedly questionable decision-making and authentically horrifying twists and turns into an increasingly frenzied ride. It's a unique use of dark humor, classic 90s tropes, and some insanely twisted red herrings and death-defying turns. Set aside your expectations because Barbarian is certain to defiantly ignore them...and that's a good thing.