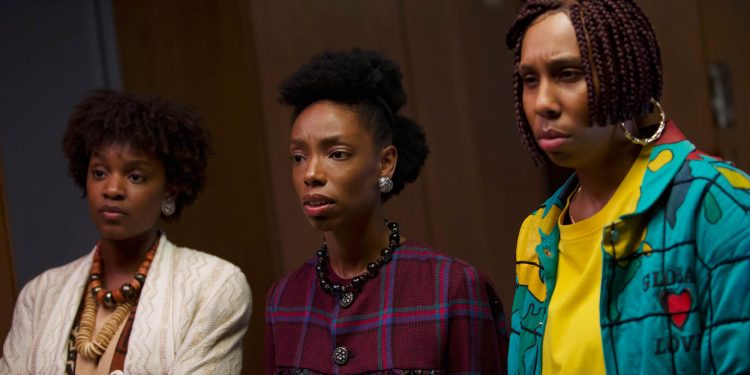 BAD HAIR6.5
For all the things that are happening on the screen, the film doesn’t have much to say. To leverage Black women’s hair for your story and to not give it the length it deserves cuts the potential of BAD HAIR at the root.
6.5

BAD HAIR sets its sights on the roots of our hair in its first scene. If you’re a Black woman who had a relaxer during your childhood, you can recall the moments played out: the burning, “that means it’s working” in response to said burning, and sometimes the scalp injuries.

For Anna Bludso (Elle Lorraine), her relaxer injury sets the tone for her relationship with (and other’s opinions about) her hair. That relationship is the core of the Justin Simien directed -and-written film. It’s intended to address the horrors and hassles of Black women’s hair but fails to deliver that on promise with its often overly-campy delivery.

Set in 1989 Los Angeles, Anna works for CULTURE, a music television company, as an executive assistant. Zora (Vanessa Williams) is hired as new senior leadership, allowing Anna to pitch her ideas and hopefully become a VJ. Zora is receptive to Anna’s ideas but candidly suggests that she “does her hair” to be taken seriously in this industry. Anna takes this feedback to heart and gets a weave installed at a luxury hair salon. Things turn for the worst as she discovers her weave is possessed, with an appetite for human blood.

The Setting is the Crown Jewel

Perhaps the biggest highlight of BAD HAIR is how accurate the late 80’s-90s cues - from the music videos, fashion, and soundtrack - are. Dear White People’s cinematographer Topher Osborn collaborates again with Simien, giving the film a class 80’s fuzzy look. Simien also calls his famous friends to join in on the fun; pleasantly surprising roles for Kelly Rowland, Usher, MC Lyte, Laverne Cox, and Lena Waithe assist in expanding this world while stretching them to do out-of-character things. But no one leans into the 80’s madness better than Vanessa Williams as Zora. A Billboard-charting artist during this time, the ’80s/90’s was a flourishing decade for Williams. So it is refreshing to see her step back in those shoulder pads to play a stern executive.

But Too Much Camp, Not Enough Commentary

The decade chose for BAD HAIR’s setting also breeds opportunity for its campiness. Moments when the killer weave is in motion call back to cheesy camp horror films of the past. In many ways, BAD HAIR feels like part homage and part parody of the genre before it. And that’s not a bad thing, but the story uses Black woman’s hair as the vehicle without really acknowledging the politics of it. The reality is: Black women feel pressure to subscribe to eurocentric beauty standards in the workplace to get ahead. This is lightly touched upon at the beginning as Anna’s motivations for getting a sew-in and the resulting reactions from her coworkers. But after installation, it becomes less about the why and more about what the weave is doing. There is no commentary about the corporate pressures nor is there a statement on why those pressures are unfounded.

Anna cuts out her weave to save her life and the lives around her. But in the final scenes of the film, there is no fitting conclusion about loving your hair. Audiences are left with more questions than answers as the end tries to open the door to more mystery. This sums up the frustrations of BAD HAIR as a piece of work. For all the things that are happening on the screen, the film doesn’t have much to say. To leverage Black women’s hair for your story and to not give it the length it deserves cuts the potential of BAD HAIR at the root.