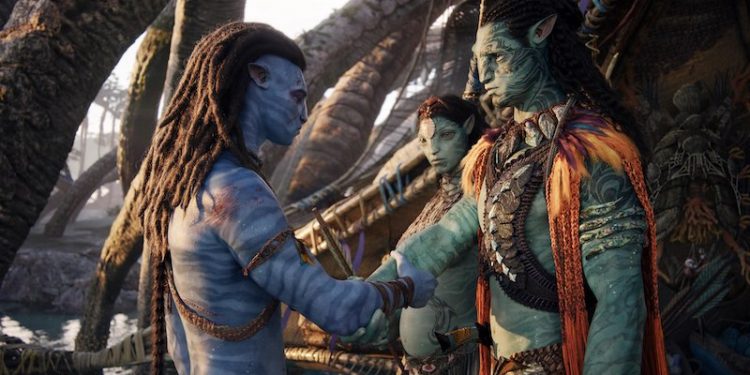 Synopsis: Jake Sully lives with his newfound family formed on the extrasolar moon Pandora. Once a familiar threat returns to finish what was previously started, Jake must work with Neytiri and the army of the Na'vi race to protect their home.

James Cameron returns after 13 years to give us a sequel to 2009's Avatar. Avatar: The Way of Water is a visually stunning film as one would expect. What is unexpected (or maybe expected depending on who you talk to) is how bland and regressive the story and plot is. While no one would claim the first Avatar film was some marvel of story-telling. It's clear that Cameron "borrowed" from several different sources for that first film but it still was edited together in a coherent and enjoyable story. This new film is not only blatant in which films it rips dialogue and scenes from but its way too long and edited together in a way that just doesn't make sense. It's really ironic considering how much talk about how superhero and other big blockbuster films "aren't real cinema" that Cameron decided to rip so much from those films for this.

The other problem with Avatar: The Way of Water is that while Cameron made huge technological progress in how the film was shot and looks, it's almost as if his mindset with the story is still stuck in 2009. It's not just that he rips from other films but he does it in ways that waters down the impact of so many of those scenes. It's the equivalent of someone taking a soul food recipe for fried chicken, removing all seasonings and then baking it instead of frying.

We have a lot of spoiler-free thoughts on this film so listen as we talk about it. And then come back from the Premium spoiler review that will drop sometime the following week.