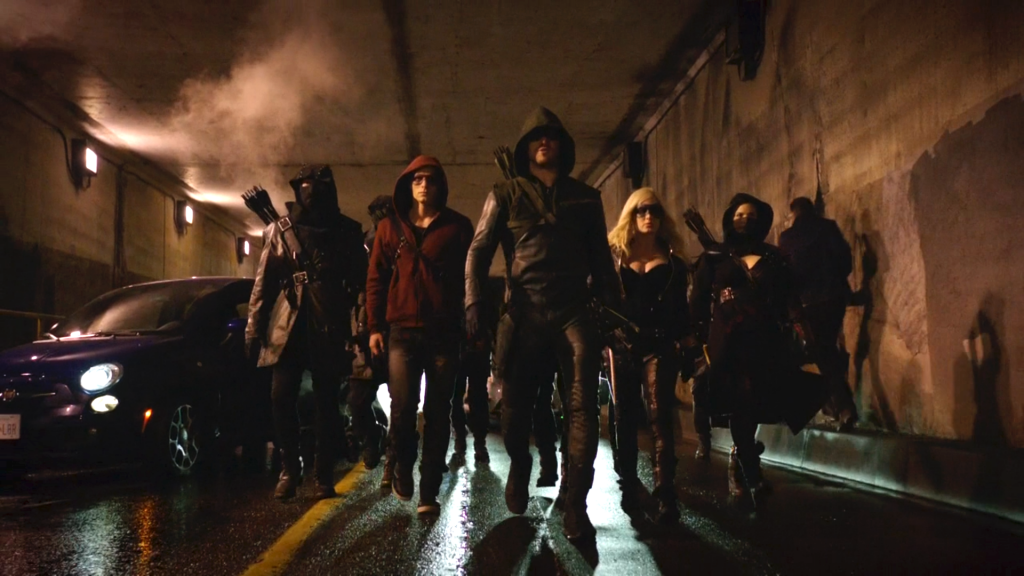 Normally I get my Arrow reviews up in a day or two but with this being the final review for Season 2, I decided to take a few days and really let this episode sink in.  Don't get me wrong, I loved this episode.  It was the perfect way to end this season.  No my reason for needing a few days wasn't to gather my thoughts but rather to come to terms with the fact that this will be the first week when there isn't an episode of Arrow coming on (and not because of a break).  It's going to be hard waiting until the Fall for Season 3.  There's a lot going on in this episode and they really did bring everything to a close in an hour.  It's shows like Arrow that make me miss the time of the 2 hour season premieres/finales.  I get why we don’t get them anymore but there are a few shows that I think could really benefit from them and Arrow is one of them.  It’s not that they didn’t have enough time to cover everything.  On the contrary, I think they did an excellent job wrapping up Season 2 and dropping hints at Season 3 pretty well in only 60 minutes.  But Arrow has really become an event to me.  This season has been so good they really should have ended it on a 2 hour episode just to make it feel more special than the rest of the episodes this season.  But like I said, this episode was still great.

There are so many things to love about this episode.  Even with a 60 minute time limit, it still didn’t feel rushed or forced.  I’m going to try to go through everything that stood out to me in this episode but I’m sure I’m going to miss something so please feel free to leave a comment about anything.   First up, Roy Harper.  While I do think he was one character that was underused this season, what they did with Roy this episode gives me real hope for the future of the character.  I believe I called them curing Roy and letting him fight side by side with the rest of the team.  When Oliver gave Roy his own mask, I had the biggest grin on my face.  And then during the tunnel fight scene, he had his own bow and was putting in work too. I guess Roy was paying attention to Oliver and all those times we didn’t see him he was training.  It's funny, it always stood out to me all those episodes that Roy was let in on Oliver's secret and Oliver said he would train him, but we rarely saw Roy training.  Seeing Roy with his own bow fighting like Oliver made me think "While we didn't see him training a lot, it's clear he was putting in some work".  The action in this episode goes without saying.  Arrow has some the best fight choreography on TV (probably the best on Network TV).  The scene in the tunnel when Oliver flanked by his allies roll up on Slade’s men gave me goosebumps.

I like that Sara made a deal with the League of Assassin’s to go back with them if they helped take down Slade.  1. I’ll take any excuse to have Katrina Law’s Nyssa back on the show and 2. It was a good way of keeping Sara alive but also getting her

out of Starling City.  There are so many characters on this show that if the writers aren’t going to kill them off, they have to have a good way of explaining their absence.  I was wondering how they were going to deal with both Lance sisters.  There was no way they could keep both Sara & Laurel as regulars.  I really thought one of them would die but, this was actually a pretty cool way of getting Sara out of the way.  Sara Lance’s storyline this year was an integral part of the Oliver/Slade feud but it happened at the expense of other characters (Roy and to a lesser extent, Diggle).   Having Sara leave opens up more room for other characters to get some screen time, still leaves open the possibility of her returning and it even means that maybe at some point Laurel steps in as Canary at some point.  Sara gives Laurel her leather jacket and tells her that Oliver is going to need her.  And after the progression of her character this season, I could see Laurel eventually stepping into that role.  Also, Sara leaving with Nyssa means the League of Assassin's is still in play.  I know some people think WB/DC is messing up by not connecting their TV shows to their movies but I believe this is for the best.  If they don't connect the two,  then there's a real possibility we could one day see Ras Al Ghul make an appearance on this show.   And I know I wouldn't want that if the movies were connected.

The Thea & Malcolm Merlyn scenes might seem a little out of place but they’re clearly setting up for Season 3.  Malcolm Merlyn treats his kids like a Sith Lord teaching his apprentice.  He calls Thea strong for shooting him and Tommy weak.   And the crazy thing is, it worked.  Malcolm Merlyn is clearly up to something and Thea going with him is only going to cause problems for Oliver in season 3.  John Barrowman is great on this show and while he only got a few scenes this season, I know he'll be back and have a bigger role next season.  Remember:  Oliver still doesn't know he's alive and he doesn't know Thea is with him.

It was sad to see Isabel go but with just about eveyr other major character surviving this episode (I’m assuming Det.Lance survives), it was a small price to pay.  Someone had to die and Nyssa wasn’t playing.  I think that was an important moment though for Oliver because he realized he was going to be faced with a choice.  Did he want to go back on his promise to be more than a killer or was he going to have to go down that road again.  I loved that "Halftime Speech" Felicity gave him that told him that he had to find another way.  She tells him to stop trying to out think Slade and that's exactly what he did.  I should probably take a moment to also address the Oliver-Felicity relationship reveal.  While I don't believe Oliver was just pretending, I'm also glad that at the end of the episode, they both played it off.  I know folks want to see them together but I think it'll just mess up the show's chemistry.  It's obvious they both have feelings for each other but I'm not sure a romantic relationship is the way to go for them.  Then again, I was also wrong about this show using super powers so....who knows.  Anyway, back to the plan. It wasn't until Oliver was face-to-face with Slade that it dawned on me that Oliver probably found the camera's Slade had set up in the Queen mansion and was setting Slade up.   It was the perfect plan because all this season Slade has been one step ahead of Oliver.  This really was the only plan that could have worked. Even when they came at Slade with the injection arrows with the cure, he just deflected everything with his sword (which was awesome by the way).    The other thing I loved about this was that even though Slade was cured of #DatMirakuru, he's still a badass.  The fact that this season ends and Slade is still alive is another reason I can't wait for Season 3.  Manu Bennett has been an AMAZING Slade Wilson.  There's just no way this show can kill him off and get rid of him that easy.  It also represented the finally transformation of Oliver Queen.  That's the  greatest thing  about this episode was the completion of Oliver’s transformation from vigilante to hero.  He even thanks Slade for helping him become a hero.  I've heard people complain about this before but this show is really Green Arrow Year One (or technically Year Two) now.  Oliver hasn't been a real hero.  He first became the vigilante as a way of seeking revenge.

The beginning of this season showed him becoming more of what the city needed.  By the end, not only has the city realized they need him but Oliver believes he can be more than just a killer.  It wasn't easy for him to not kill the man who killed his mother, but he realized that's what he needed to be.  It's a stark contrast to what happened on the Island.  He had a choice of killing Slade or curing him and he decided to give into his anger and "kill" him.  Remember, it was basically the same circumstances.  In the Flashback, Oliver thought Sara died and he was angry.  And he gave into that.  We've witnessed the growth of Oliver Queen.  One thing about the Flashback though.  I'm not sure that was the last time Oliver saw Slade on the Island.  Remember, on the island we've seen the Deathstroke mask with an arrow shot through it.  And at the end of the episode we see Oliver in Hong Kong meeting Amanda Waller for the first time.  So many questions need to be answered.

This was one hell of a sophomore season.  I remember I was nervous because they decided they were going to switch up the plan from season 1 and start introducing super powers.  Then there was talk about Barry Allen showing up and having him as The Flash.  And I was skeptical.  I loved Season 1 but I just wasn't sure if they could do what they were saying for Season 2.  I was wrong.  This season was amazing.  There are several characters that changed drastically through this season and we watched them grow.    Seeing the promos for the Flash make me realized that Season 3 can be even better.  They're introducing Metahumans on the Flash and since Arrow is in that continuity too, it's a safe bet we'll see Metahumans on Arrow as well.  There's also the thing about Oliver Queen not having his company anymore and being broke.  Sure Isabel is dead, but I don't think the writers will pass up the great opportunity to write about Oliver trying to be a Superhero while broke.  Felicity is going to have to find another job (shouldn't be hard for her).  Diggle has a kid on the way and he's going to have to find work as well.  We talked about this on The Nerd Off but the first season of this show was really Batman in a Green Arrow mask.  This season they started to separate it a little bit but I really believe the third season will really establish this character as the more traditional Green Arrow.  This was just a phenomenal season.  It was great (and sad) having this and Agents of SHIELD wrap up the same week.  And this fall will be even greater:  Gotham on Monday Night, The Flash at 8 pm on Tuesday, Agents of SHIELD at 9 pm on Tuesday, Arrow on Wednesday and Constantine on Friday.  A wonderful time to be a comic book fan.