Arrow Review: This is Your Sword 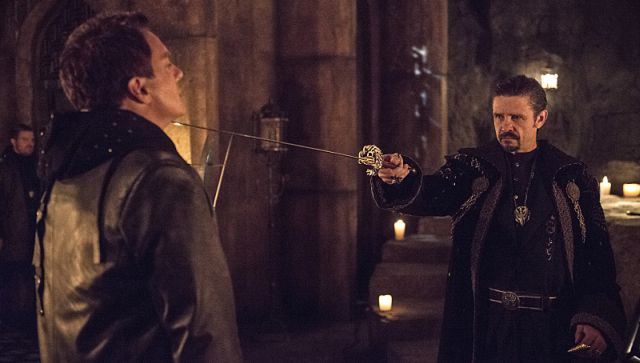 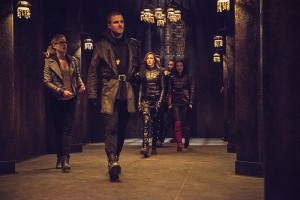 I’ll be honest, I didn’t see the big twist coming this episode. That twist being that Oliver isn’t brainwashed but is instead pretending to go along with Ra’s in order to keep the league from destroying the city. This is big for a couple of reasons. First, it means everything that Oliver did last episode was by design and it was actually Oliver, not brain washed Oliver making these decisions. That’s important because of the ramifications this has on the second thing: Once again Oliver is lying to those close to him and is burning his relationships. Oliver kidnapped and threatened Lyla. He left Diggle’s daughter alone.What was he thinking? I mean, I know what he was thinking but it’s this short sighted behavior that’s been getting him in trouble. If there’s been one consistent theme across both Arrow and The Flash its been that lying to those close to you has serious ramifications. Oliver’s team up to this point has had unwavering support for him and has followed him almost without question. But it’s never reciprocated. Oliver brought Malcolm Merlyn into his plan but left the rest of his team out? That’s going to leave a sore spot especially with Diggle and Felicity (who is still in denial about Oliver). With one episode left, I see a huge rift (a season in the making) between the team at the end of this season. Diggle even tells Oliver that this isn’t something that can be easily forgiven and that it might never be fixed.  When you look at how this season as gone, this kinda needs to happen for Oliver. I’m even thinking in the Flashbacks we’re going to see Oliver end up being sent back to the island alone. Think about it, end of this season we could see Oliver having to defend his city alone (well, maybe with a side kick but I’ll talk about that later) with no backup from Diggle or Felicity. We’ve seen how much of their loyalty and love Oliver has taken for granted and its about time to see that come back to bite him. 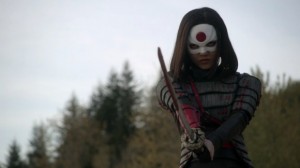 I loved the big fight scene with Team Arrow & Tatsu as Katana trying to stop the League from launching that plane. Seems like Nyssa’s training of Laurel has started to help her as she’s starting to fair a lot better in these fights, especially against members of the League. I do wonder about the limitations of her Canary Cry though. We saw her use it again at the beginning of the episode but then in the fight at the plane, she didn’t. I’m wondering if there’s a technical limitation as to why she doesn’t use it more. One thing I was thinking was that maybe since she got the original tech from her sister, she knows the League knows about it and would already be prepared against it. All they would need would be some ear plugs. Not really sure what’s going on with that but I’m sure we’ll get an answer because it is something that sticks out when she fights now. Loved Felicity thinking throwing her tablet at her attacker is what stopped him. For a minute there it looked like it was until you saw Malcolm’s arrows in his back. Also loved her telling him that she wouldn’t have saved him and Malcolm responding “I know”. I’m glad they had Ray as a backup plan because with the quick scene of him telling her his suit was finally done, it would have seemed odd not to have him get in on the fight. What’s up with him having Felicity sign papers to transfer ownership of the company to her? Felicity’s vagina must be magic. She went from unnoticed IT girl to now she’s about to be CEO of Palmer Industries. Talk about starting from the bottom. 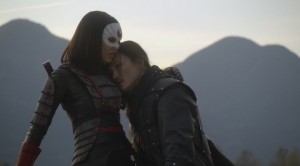 It was sad seeing Tatsu and Maseo fight. But as Maseo said to Tatsu, it was really the only way to release him from his prison. We find out that it was Maseo who offered Ra’s the virus to join the league. With the death of his son, I can see how Maseo got this desperate. He’s was an honorable man who made a mistake. Honestly, his path is one similar to Oliver. He suffered a horrible personal tragedy and thought way to handle it was to lose himself in his “mask”. Oliver is making the same mistake and hopefully he will realize that before he further damages his current relationships.

Thea now has Roy’s red hood. I’m glad Thea and Roy got at least one more chance to be together before Roy goes off. I still think we’ll see Roy in subsequent seasons (as long as he doesn’t come back next episode and get killed). I did find it interesting that he’s using the name “Jason” and he used to wear a red hood and technically he’s “dead”.  Nice CW, I see what you did there. Anyway, I think this pretty much confirms Thea becoming Speedy. By the end of this season, Thea might be the only person left standing beside Oliver because the rest of the team might abandon him because of his lack of trust in them. Thea is blood though and end of the day, everything Oliver did and sacrificed was for her. I think it would be pretty cool to see Oliver and Thea running around saving the city solo next season. 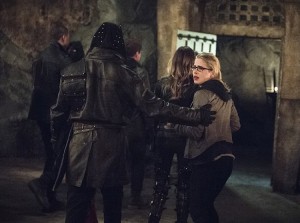 The rest of the team isn’t dead. I didn’t need to watch the promos to know that (but why they would show them alive in them is beyond me, real stupid). My only question is how are they going to get out of this? Was Malcolm turning on Oliver in front of Ra’s part of their plan or was he really just being the self serving Malcolm Merlyn we’ve always known. It’s going to be interesting seeing how this plays out. We know next episode of The Flash Oliver shows up to help Barry and in the season finale of Arrow, Barry shows up. I love how they’ve been crossing over between these shows so effortlessly. One more episode left and I’m really intrigued on how this all gets pulled off.