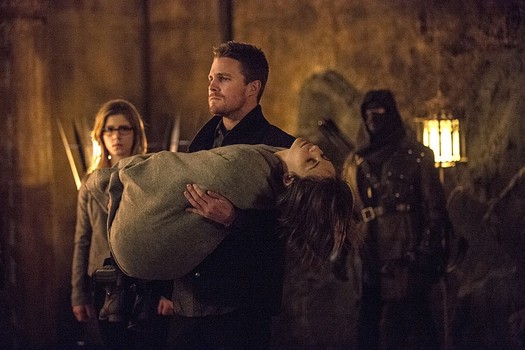 To counter all the idiotic “I can’t watch Arrow now that I’ve seen Daredevil” claims and posts let me be clear:

I love this show 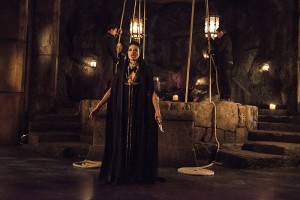 I love Arrow because its really the first TV show we’ve had to take major comic book characters and treat them seriously on network TV. For that alone it will always have a special place in my heart. But instead of just resting on that accomplishment, the show has continued to grow and evolve. It started off just being a more mature comic book show that was grounded in reality. At one point in season one they even said they weren’t interested in adding in super powers. Now not only did they add in Barry Allen (with his own show in the same universe) but last week we got a metahuman that proves the existence of super powered individuals before the particle accelerator blew up. And the show didn’t stop there. This week we actually got them to not only show us but say “Lazarus Pit” on network TV. I’m not going to lie. When Oliver was stabbed and nearly killed by Ra’s in the mid-season finale, I was worried about what they would do to bring him back. They could have used the Lazarus Pit then but that would have brought up problems (which I will get into later). When they didn’t, I thought maybe they just didn’t want to got that far. But then we started getting more and more hints that they would. Then in this episode they just jumped in head first. I like the idea that they put Thea in the pit instead of Oliver because it brings up an important piece of lore of the Lazarus Pit: It kinda makes you crazy. Returning the dead to life isn’t something that should be done lightly and there is always a cost. Which leads me to another interesting development on the show… 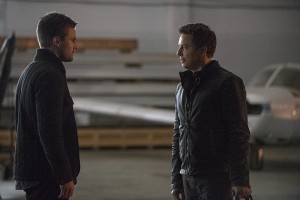 The interactions between Oliver and Malcolm Merlyn have changed so much. Hell, between Malcolm and the whole team to be honest. Watching not only Oliver but also the rest of the team order Malcolm around has been an interesting thing. Malcolm was the person most against putting Thea in the Lazarus Pit and thought he really had standing in making this decision. But the truth is, this is all his fault. He’s the one that crossed Ra’s and then he’s the one that brought Thea into this. For all his talk about keeping her safe, he’s the one that put her in the most danger. One thing that I did find a little odd was that at the end of the episode when he was talking to Thea who got her memory back, why Malcolm’s whole demeanor changed. He was very adamant that putting Thea in the Pit would cause more harm than good and take a piece of her soul. But at the end, he was delusional enough to think he can just go back to being Malcolm Meryln the father was a bit off to me. I also think we’ll see more side effects of Thea being put into the Pit. She seems like she’s back to her normal self but like everything on this show, they don’t spend time on things that don’t matter and they spent a lot of time talking about how the Pit would change her. 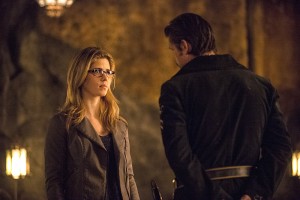 Well that happened. Felicity and Oliver finally got that sexual tension between the two of them out of the way. Only took 2 1/2 seasons. Sorry Ray but she was never your girl. Craziest thing though. Felicity does have feelings for Ray though, they just aren’t as strong as her’s for Oliver. While I’ve seen some people complain about this, I feel like this is actually a pretty realistic situation. How many of us have been in situations where the person we love is emotionally unavailable so we attempt to move on? Your feelings for the person don’t go away. I don’t fault Felicity for trying to move on with Ray. Truth is Ray came on a bit strong and if he took his time with Felicity she might actually still be with him. I do like how far Felicity has come as a character though. She faced down Ra’s pretty fearlessly (stupid but fearless). The conversation Ra’s had with her though reminded me of the conversations Daisy/Skye had with her father Cal on Agents of Shield. It was a humanizing moment for Ra’s. His story about giving up his family to take on the mantle of Ra’s and not being able to say good bye made what he was doing for Oliver weirdly compassionate. We even get that compassion again when we see Ra’s spare Maseo’s life. Ra’s has a code. It’s a strange code but one he sticks to. Speaking of having a code, Diggle has always been the moral base for this show, even when it’s not Oliver. I love that Diggle is uncompromising. Here he is, surrounded by the League of Assassin’s and he’s telling Maseo to his face that the league is nothing but cowards running from their past. The Diggle-Maseo scene was short but good. You could see both sides of the argument. Diggle was looking at it from the point of view of a current father while Maseo was looking at it from the point of view of a grieving father who lost everything.

I like most of the flashbacks on Arrow. I know some people don’t but to me they’re important. They help explain who Oliver currently is and why it’s so hard for him to trust and believe in other people. The flashbacks are good because we know when it all ends, it ends horribly. Oliver ends up back on the island with a full beard, dressed like a homeless man until he’s found by that fishing boat. The flashbacks allow us to see where his sense of doing the right thing and being a hero came from but also why he’s so cold and overprotective. Everyone who has ever helped him on the island he’s up as a tragedy.

Last thing, I can’t remember if I put it in a review or if it was just something I tweeted out at the beginning of the season but we now see why the Arrow logo this season looks like that. Every season they change the logo a bit to represent a theme for the show. This season the logo is changed to represent the League of Assassin’s logo. Again, its the little things on this show that really get me. You can tell they really care about the fans of this show. I also really love that as this season approaches it’s end they’re answering all the lingering questions we had. I remember in my reviews from earlier in the season where I commented on not knowing where they were going with the season but having confidence that they would bring it all together and I’m glad they are. The final episode of this season is called "My Name is Oliver Queen". If you really think about it, this season has been all about Oliver believe he couldn't be both the Arrow and Oliver Queen. Even in this episode, by submitting to Ra's, he's giving up on being Oliver. I believe that this season will end with Oliver finally accepting that he is both Arrow and Oliver Queen and that he has to learn to manage both. And to do so will mean depending on those around him. If the season ends the way I think it will, I'll be honest...it will become my favorite season.