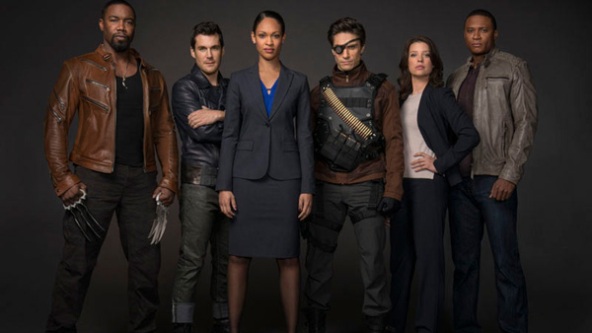 "Suicide Squad" had the unfortunate task of being the next episode after one of this season's best ("The Promise").  And with the introduction of The Suicide Squad, it was bound to have a ton of hype that would be almost impossible for it to live up to.  Still, I think this was a pretty solid episode.

First off, I like the fact that it was a Diggle heavy episode.  With all the new additions to this show and to Team Arrow, Diggle's character hasn't been getting a lot of screen time.  I even tweeted out at the end of this episode that I have a feeling Diggle might not  make it out of this season.  I hope it doesn't come true though.  While on the surface his character seems a bit redundant, I think Diggle is needed on this show.  He brings a moral standard that other characters sometimes lack.  Granted, his stance is a bit hypocritical.  Lyla brings that up when Diggle says what Waller wants "Taskforce X" to do is different from what him Oliver does.  At first I thought "how dare this bitch say that, they're clearly different" but then I thought about it.  In Season 1, Oliver was running around killing a bunch of folks just off of what was in a little book his father gave him.  Now, being a shady businessman should lead to you getting punished but an arrow to the face is a bit much.  And even Diggle himself has taken lives.  But he still has a code that he tries to live by.  Even though it's a flawed code, I think it still a good code to have and it's something that Oliver needs around him to keep him grounded.  In a way, I feel that Diggle is to Oliver Queen what Alfred is to Bruce Wayne.  It's an important relationship and I hope they not only keep Diggle but expand the character's relationship/influence with Oliver and better utilize him.

Another reason I liked this episode and hope they keep Diggle around is that this relationship he has with Floyd Lawton aka Deadshot is something I think that could be really good down the line.  This episode is the second time that Diggle has not only not killed Deadshot but has saved him.  They've been reluctant partners twice this time and both times they've actually worked out pretty well.  I think there's a lot more here that they can explore.  Particularly about who hired Deadshot to kill Diggle's brother.  The more I think about it as I write this, the more I realize that maybe Diggle is safe from getting the axe.  There's just too much to explore with his character, Deadshot & ARGUS.  Which leads me to the biggest issue I had

with this episode:  The rest of the Suicide Squad is pretty much useless.  Shrapnel is apparently killed off screen for trying to escape and disobey orders.  You see the smoke from the explosion but remember, explosives are Shrapnel's thing so I wouldn't be surprised if he somehow survives this.  Bronze Tiger is HEAVILY underused in this episode.  I should be grateful that he stabbed someone but still, you have Michael Jai White as Bronze Tiger, USE HIM.  We get a mega cameo/tease of another member of the Squad, Harley Quinn, although we never really see her.  I'm reserving my feeling about this cameo until I see what they do with her.  If they use her, then I love this cameo.  If they never do anything more than what we saw in this episode, then I will hate it.  Right now I'm cool with it because it was such a shock.  I actually try to avoid all news about this show and barely watch the promos because I love being shocked by what happens on this show. Tara Strong did the voice for Quinn and she's actually doing the voice for the Arkham Knight game that comes out this fall.  I do hope they eventually bring her character to Arrow.  Not gonna lie, when she said her line about "I'm a trained psychiatrist" I kinda lost it.  I think the Suicide Squad could end up being a pretty good recurring group on Arrow and while this first appearance wasn't bad, it didn't live up to its full potential.

You'll notice that I've spent most of my time in this review talking about things other than Oliver Queen and Slade Wilson.  While I'm grateful that the writers put in a Diggle centered episode, I'm also glad they didn't forget about the events of the last episode.  We don't get a lot of Oliver but we get enough to see that he's playing right into Slade Wilson's hands.  Slade is all in Oliver's head right now.  I'm also glad though that we finally see Oliver realizing that shutting others who want to help him out isn't the way for him to go.  He starts off at the beginning of this episode shutting out Sara and trying to find and confront Slade on his own.  It's quite frankly an idiotic plan but it's also classic Oliver Queen. It's funny that it was Laurel that finally made Oliver see that he needs to open up to those close to him but I'm glad that he finally listened.  Look, the only way for Oliver to even HOPE to contain Slade is if he uses every single one of his allies.  It was pretty annoying seeing Oliver tell Sara he didn't want her help and she could do this all on his own.  While I understood that at first, I was then reminded about how hypocritical that was considering Oliver not doing the same for Sara when Nyssa al Ghul came to town.  So now it seems like Oliver is finally getting it and it's about time. He's going to need everyone to take Slade down because Slade seems to have a plan and is focused on destroying Oliver and everyone he loves.  Hell, I wouldn't be mad if a certain Scarlet Speedster had to show up to help, although that's probably very unlikely.

Last thing....so Waller and Oliver know each other from before? When Waller first came to Diggle and told him she know about what Oliver Queen does, I figured it was just because ARGUS Intelligence was smart enough to put things together.  But when she says "I thought you killed Slade", that makes me think they've had dealings before.  Not to mention that Oliver told Laurel he had to go see "an old friend".  Not saying that he would tell Laurel the truth, but still, there were other things he could have said.  And now I want to know how these two know each other outside of Diggle.  Truth is, it makes me wonder if that's who Diggle ended up working as Oliver Queen's bodyguard to begin with.  As always with Arrow, this episode just opens up so many more questions.

Again, a nice solid episode.  I think hype is the only thing that really hurt this episode.  It's clear that the Suicide Squad and ARGUS are going to play a larger role on this show and this was a solid introduction to that role even though it didn't fully utilized the potential.