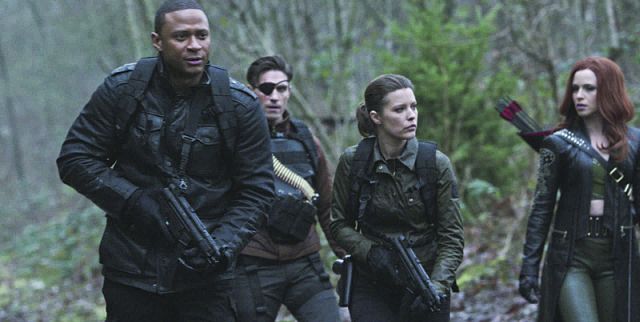 Ra’s Al Ghul and the League of Assassin’s are like that group of guys that won’t take “No” for an answer from a woman passing by. They’re street harassing Oliver Queen until he finally gives in and accepts Ra’s offer. I’m not sure how Oliver is going to deal with this outside of finally accepting. Captain Lance is back on his anti-Arrow crusade and the end of this episode pretty much means Team Arrow is about to be hunted. I was wondering when Ra’s was going to use Maseo against Oliver and it seems he saved him for when the “Arrow” starts killing innocent civilians. With the Mayor shot, Captain Lance is going to come full force at the Arrow. Again, this is Oliver & Laurel’s doing. Their lies have come back to haunt them. Imagine if they had been open with Captain Lance about Sara’s death at the beginning? I mean hindsight is 20/20 and  I definitely understood why they didn’t at the time. But seeing how things have unfolded, if they had been open with him not only about her death but about the League of Assassins then maybe Captain Lance wouldn’t be going down this road. Having said that, I still think the decision not to tell him was made with good intentions. Hell, most of the lies told on this show are about our heroes trying to protect those they care about. Problem is, lying is never a sustainable strategy. 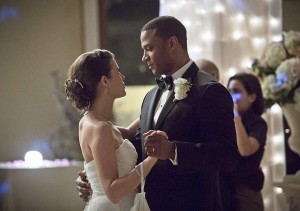 In continuing with the theme of this season, this episode gives us more focus and depth on some supporting characters. While Oliver’s chasing down the League of Assassin imposters killing in his name, Lyla and Diggle are back rolling with the Suicide Squad for another mission. Just had to know that Lyla and Diggle couldn’t have a normal honeymoon. Every week I say this but, I really don’t get the reason people don’t like this season. Arrow is dealing witha  lot of the issues people have brought up before with several background characters and putting them through mini-story arcs. In this episode we get Lyla and Diggle addressing the fact that they’re parents now and both of them really shouldn’t be running around on these dangerous missions. Not going to lie, my heart skipped a beat when Diggle said he was leaving Team Arrow. I felt like Luke when Vader told him he was his father. But it makes more sense for Lyla to leave ARGUS. As Lyla pointed out, Diggle is doing good work with Oliver but she can’t really say the same with herself and ARGUS. We know how shady Amanda Waller is and it’s past time for Lyla to see that.

I also really enjoyed the development of Floyd Lawton this episode. The first time we met him in Season One he was just a cold blooded killer. Since then though, he’s developed into more than that. It’s to the point I almost forgot that he killed Diggle’s brother (I think John almost did too until he saw the tattoo). I knew someone was going to die this episode because of all the love and family talk between Lyla & Diggle but once I saw the flashbacks humanizing Lawton (I liked how they tied in his war PTSD) I knew it would be him. I’m still not 100% sure he’s dead. As with everything related to comic books, no body, no death confirmation. I’m hoping he’s not because there’s still so much to answer for. In the flashbacks we get him being approached by a H.I.V.E. agent to take out Diggle’s brother. So we know the show hasn’t forgotten about H.I.V.E. Part of me wonders if they took out Deadshot for now until the Suicide Squad movie comes out. Word is that’s why even though we heard her voice, we won’t be seeing Harley Quinn in the flesh on Arrow. I think DC is comfortable having multiple versions of their bigger characters on TV and in the Movies but when it comes to the Suicide Squad they don’t want anything to really cause confusion. Makes sense to me. At this point even with the solid cast, Suicide Squad is their biggest risk. Still, its sad to see Michael Rowe’s Headshot a casualty of that. 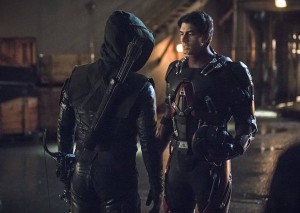 When are these other heroes going to realize that Oliver Queen is a veteran in these streets? Ray thought his suit meant he could take out the Arrow easily and man was he fooled. Oliver Queen is Batman. He summed up the ATOM suit then took it out with a well place dart then Sparta kicked Ray in the chest. Those darts are becoming a pretty good weapon in Oliver’s arsenal. He used the same thing to stop Barry. I’m glad they didn’t drag out the fight or animosity between the two of them. That said, I'm loving the ATOM suit. I think once Ray gets more time using it, he's going to be pretty bad ass with it. Can't wait to see him in the spinoffs with it. Not only is the suit good but Ray is also brilliant. We forget that through all his eccentric behavior the man's IQ is through the roof. He hasn’t really been paying attention because he’s been singularly focused on finishing his suit but now that he’s come up for air, I love that once he was able to use his suit to figure out that Oliver was the Arrow that he could figure out everything else too. He took one look at Laurel’s cast and her defense of Oliver and was like “Well…you’re the Canary.”  By the way, Nyssa’s way of training seems to be brutal if Laurel is in a cast all ready.  She's gonna be so bad ass by the time Nyssa gets done with her. 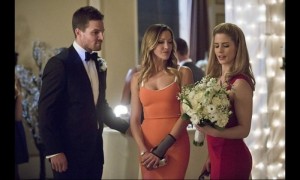 I liked this episode because I continue to like what they’re doing with the characters that surround Oliver Queen. I think they’re making them stronger which in the long run will make the show stronger. I think we’ve even progressed enough with the Oliver-Felicity romance. I believed Oliver when he said he wants Felicity to be happy and that she deserves better. He was pissed about her not telling him about Ray’s suit because that means Felicity’s just back with another guy obsessing over saving the city. He could have really kicked Ray’s ass more (Ray kinda deserved it) but instead he told Ray to basically go home to Felicity. As obsessed as he is, Ray didn’t spend 5 traumatic years on an island (and in Hong Kong and wherever else Oliver ended up). So Ray while a bit obsessed with protecting the city still believes he can do that and be happy. Time will tell if he can do that or if Oliver is right. But as long as Oliver believes he can’t be happy and Ray does, Felicity is making the right choice in being with Ray.

Outside of Deadshot’s fate, the only thing that really bothered me this episode is that they didn’t follow up with Oliver’s flashbacks and if that was the real Shado or not. I don’t blame them too much because usually Oliver’s flashbacks tie into something going on in the present and they probably wouldn’t have fit in this episode. Instead we got flashbacks of Lawton that weren’t bad but makes me have to wait to figure out who this other Shado is.