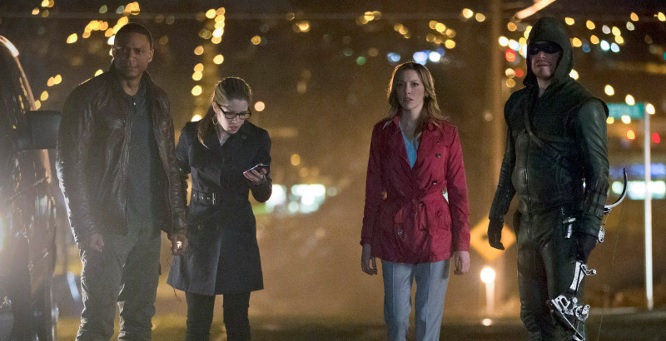 Man did they pack a lot into this episode.  It's no secret that I'm a huge fan of this show, particularly this season, but this episode might just be my favorite.  So many of the different side plots from this season are coming together in this episode. What's made these last few episodes so good is the emotion that runs in them. You feel a since of hopelessness. You feel as though there's too much going on for Oliver and his team to stop.  And yet we watch and cheer them on to keep fighting (Felicity was motivating as hell in her little mini-speech to Oliver).   Then on top of all that you have the action and utter destruction that Slade's army is bringing.    This was as perfect of an episode as I could ask for.

First off, looks like I might have been wrong.  Slade really does want to destroy Starling City because "Oliver loves it."  I honestly thought he had bigger plans for the city but looks like he's all about reducing the city to rubble so that all it's good for is graves.  Slade Wilson is such a cold hearted son of a bitch, he doesn't even put the Deathstroke suit on this episode and he's still a menacing force.  Well menacing to everyone but Sebastian Blood.  I think the reason why I love this show so much is that because Green Arrow is really just another version of Batman, this show feels heavily like a TV version of Christopher Nolan's trilogy.  So when Sebastian Blood was forgetting his place when yelling at Slade for "not keeping his promise", I had a flash back to John Daggot raising his voice to Bane in The Dark Knight Rises.  I was really waiting for Slade to hit Blood with the "Do you feel in charge?"  You just knew once Slade sent one of his men to Blood's office to kill everyone there (Even the District Attorney) that Sebastian Blood was going to turn on Slade.  And that leads me to my only real complaint about this episode.  While I did enjoy watching Isabel run BOTH swords through Sebastian Blood.  I do wish he wasn't killed.  Even though he was a constant part of the storyline this season, when you think about it, he wasn't fully developed.  When he gave the cure to Oliver he mad mention about his father and while we do know a bit about him, I really do want to know what exactly his vision for the city was.  I mean he was clearly wrong but in a way he was coming off like a Ras al Ghul type villain.  What I mean is, while his methods were brutal and evil, the end goal was for a greater good (at least in his mind).  I feel like so much more could have been done with him in future seasons.  But his death also served a purpose.  He was very delusional as to how much danger he was in for betraying Slade.  And in a while that might seem like sloppy writing (I mean come on, Slade is destroying a WHOLE CITY just to get back at Oliver) I think it also goes to how crazy Sebastian Blood really was.

Another thing I was "wrong" about.  I've changed my mind on Isabel's "Ravager" costume.  It's not that bad.  Now that I've seen her in action with it, I like it. I'm hoping we get more fight scenes with her in the season finally.  Her brief fight with Diggle when she was kicking his ass was pretty badass.  Until Felicity hit her with the van.  I found it interesting that Isabel seemed really interested in finding Felicity and killing her.  I almost forgot that Felicity was NOT a fan of Isabel (especially after she found out Oliver slept with her).  I also noticed the face Isabel gave Slade when he said that he wished "Shado" could have been there.  Not only did she not know who Shado was, but it was almost as if she was a little jealous that at the moment of one of their impending victory, Slade mentions woman she doesn't even know about.  Could come into play in the Finale. I will say, even if Slade & Isabel are cured, I don't want them to die.  Manu Bennett and Summer Glau are too good in these roles to kill them off now.

Laurel's new role on this show is also great to me.  I love that she's finally got her groove back and is being strong for both Oliver and Sara.  As much as people complained about her earlier in the season, you have to admit that what she went

through has made her character stronger now.  I wasn't even shocked that she was able to use Oliver's bow to escape the debris.  Remember, in Season 1 she almost took off an assassin's head with a shotgun and she's held her own a couple of other times.  I also enjoyed the sister moment she had with Sara.  As messy as this Sara-Oliver-Laurel love triangle has been, all three of them are so different from who they used to be.  Now that Laurel's over feeling sorry for herself, she can now be there for 2 of the most important people in her life (Sara & Oliver) who have protected her even when she hasn't been there for them.

I love that Officer Lance got his detective shield back.  It's about time they start recognizing not only his value but the value of "the vigilante".  If there's one thing I really would like to see in Season 3 is the city being more open to good vigilantes like Green Arrow.  I want to see Oliver and the police working together more and not just at times like now when the city is being destroyed.  Now that Detective Lance is put back in charge and ordered to support the Arrow, I want to see that continue.  I would love for there to be a relationship like with Batman and Commissioner Gordon.

Malcolm Merlyn is back and he's here to save his daughter.  He also hasn't lost a step.  We forget that as the Dark Archer he was whooping Oliver's ass EASILY.  And even to "defeat" him Oliver basically has to stab himself.  Merlyn took out a

total of 2 Mirakuru soldier's himself.  Dude is a badass.  This was honestly one of the most compelling part of this episode.  Thea's already been a bit unstable with all that's happened and now here is Malcolm Merlyn, her real father, returning from the grave, to save her.  And I can't blame her for not trusting him.  After all the shit she gave Moira at the beginning of the season for going along with The Undertaking and then for how she acted when she found out Oliver and Moira were keeping the truth about her real father from her, I get her reaction.  And that leads me to how this episode ended.  Man...fuck these writers man.  They're gonna give me a heart attack. How do you end this episode by going to credits after Thea shoots the gun?  Merlyn was trying to sell Thea on coming with him for protection and for a minute I thought she was going to do it.  My mind started racing as to the possibilities........and then Thea shoots.  Now the question is, did she really shoot Merlyn or was this just fancy camera angles and she was shooting at someone behind Merlyn?  I really like John Barrowman and like Glau & Bennett, I think he's necessary as a recurring character.  So I'm really hoping he's not dead.  The character is just too good.  I mean he told Thea to take the safety off the gun first if she was going to shoot.  It was almost like a Sith Lord telling his apprentice to take the safety off the lightsaber before trying to kill his master.

It's going to be interesting to see who Slade grabs to be the final death in his crusade against Oliver.  There are 3 choices:  Sara, Laurel or Felicity.  Thea is off the table because Slade has had an opportunity  to kill her twice already and hasn't done it.  Plus he's already hit Oliver family by taking out Moira.  I could see Slade making Oliver have to choose between his current love Sara or his former love Laurel.  Then there's Felicity.  I really thought Oliver and Felicity were finally going to kiss when she was telling him that they couldn't give up.  Truth is, I don't want to see any of those 3 killed.  Sara seems finally ready to embrace being a hero and that her time as an assassin doesn't define her.  Laurel is becoming the strong character I always believed she could be.  And Felicity...well Felicity is Felicity. She's needed for this show.  She's not only Oliver's version of Oracle but her awkwardness makes for some great moments.

Again, this was a helluva episode.  I feel like only scratched the surface of all that happened here.  I didn't touch any of the flashbacks, Amanda Waller and her love of drones(Are we going to get another appearance of the Suicide Squad?) or even what's going on with Roy.  I really hope that once Roy is cured he gets his own Red Arrow outfit (even if it's next season).  There's been a lot of turn around and development for a lot of characters on this show and I feel like Roy Harper is overdue for  his chance to really shine.  I also think Waller & ARGUS are going to be big in Season 3.  She just knows way too much about Oliver's conflict with Slade when they were on the Island.  But yeah....next week.    It's not going to have a happy ending.  This show doesn't do happy endings.  I don't know if my heart can take it.