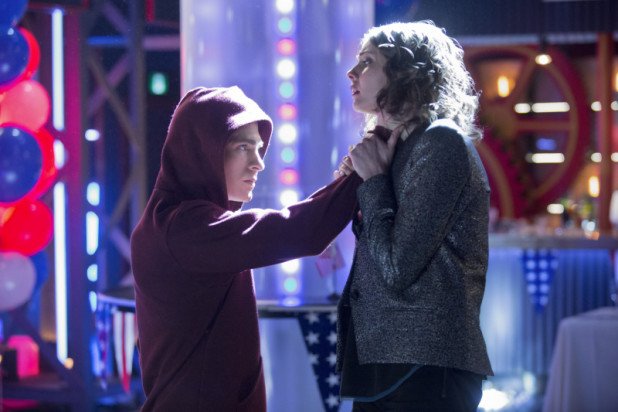 The main focus of this episode was on Oliver trying to stop Roy's rampage.  I really enjoyed this because I had no idea where they were going to go with it.  I wasn't really sure Roy was going to make it out of this episode alive.  He damn near broke Oliver's leg and he was choking Thea.  And that's not even the worst of it.  He didn't just beat some people up.  He killed a cop.  That has huge ramifications for his future.  Sure, it's the mirakuru that made him lose control, but that's pretty irrelevant in the eyes of the law.  The one benefit is that no one really could identify Roy but still, he now has the blood of an innocent on his hands as well as all the people he hurt.  I think it will be interesting seeing how Roy handles it.  That's assuming they can cure him. I did like how they showed the doctor helping Oliver (as the Hood).  It tied back to the episode where Bronze Tiger & China White were stealing medicine and Oliver stopped them.  This is another one of those things I would like to see more of in Season 3.  With all the good he's doing to save the city and the people in it, we really need to start seeing more people on Oliver's side.  Like how the people of Gotham have come to appreciate Batman.

The conflict between Sara and Oliver in this episode really has me leaning towards Sara dying.    Just like Helena, Sara is trying to convince Oliver that she's a killer that can't be rehabilitated like he was.  One of the overall themes of this season

has been Oliver fighting to honor Tommy's memory by not being a killer.  But it's a rule he can't always keep.  Remember when Count Vertigo threatened Felicity and Oliver put 3 arrows into him like it was nothing?  And even as Sara brought up again this episode, Oliver has no problem with trying to kill Slade if given the opportunity.   So we've documented Oliver's hypocrisy on this issue.  However, this was the first time when Oliver has really articulated why it's different.  Oliver still wants to believe killing isn't the only option, particularly when he believes he can save the person.  There's probably a lot of guilt Oliver is feeling right now that he couldn't save Slade.  Although they haven't revealed what happened, it sounds like Oliver had an opportunity to cure Slade and opted to try to kill him instead.  It's all coming together now.  Oliver thought Sara was dead and we'll probably see Slade "kill" Sara on the island.  That would probably be enough to make Oliver decide against curing Slade and go straight to killing him.  With Roy, I can see why Oliver is so hesitant to do anything but trying to cure Roy.  What if they fail?  Now he has another Slade Wilson who will be out for his blood.   Sara though, just isn't where Oliver mentally when it comes to being something other than a killer.  Remember, she was with the League of Assassin's.  She can't really turn that switch off.  She loves Oliver but she knows she can't play by these rules.  When she leaves she tells Sin she's going to see an old friend.  I wonder if this means Nyssa will be making a return appearance.

Another quiet thing that's going on that we should see affecting Team Arrow the rest of this season and next?  The Queen's are broke.  Of course the immediate concern is Slade Wilson and his army but how does Oliver keep this going if he has no money?  Being a vigilante is expensive.  As Thea pointed out, Diggle and Felicity are getting paid by Oliver.  How are they going to go on?  Right now Thea has to be the only one in the family really making any money because she's the club owner.

But the biggest thing about this episode is clearly Moira Queen.  You don't realize it at first but everything else in this episode is really to set up the very end.  I really liked the moments between Oliver and Moira this episode.  Its what makes the end of the episode so hard.  When Moira told Oliver that she knew he was the vigilante and that she's known since The Undertaking, my jaw dropped.  But looking back at it?  Classic Moira.  She constantly plays the person who is out of her league and oblivious to what's going on when the reality is, she's much more aware, cunning and involved than people know.  When we first meet Moira in Season 1, she was unlikeable.  You just got the feeling that she was up to something and that she probably had something to do with Robert’s death and the Queen’s Gambit sinking.  But as you learn more about her you realize she’s the epitome of a mother bear protecting her cubs.  Even her most shadiest of dealings can be traced back to her just protecting her kids.  The flashbacks this episode quietly brings up a pretty big deal.  Moira paid off a woman Oliver had gotten pregnant to hide the baby from Oliver.  This brought up a couple of things.  One, Moira always made decisions in what she thought were the best interest of her kids and even though they might be tough, fucked up decisions, there was always a hint of her not being truly evil.  She could have pressured that woman into having an abortion.  Instead she paid her $2 million to have the baby, lie to Oliver and move out of the city.  Of course this brings up the second big issue:  Oliver Queen has a 7 year old son he doesn’t know about.  This could be connor hawke from the comics.  Who knows how they will treat this.  Might just be a throwaway homage to the comics but knowing this show, this little tidbit will come back in a big way.

So we get all this about Moira.  We found out she's well aware of what her son does with his nights and we realize that as much as we've questioned her, she's a damn good mother first.  She was going to give up on her campaign solely so she could spend some time to rebuild her fractured relationship with Thea.   She only decides against it after talking to Oliver and they pretty much bond over the fact that sometimes you have to sacrifice the people you love for the greater good.  It felt like Oliver was finally understanding where his mother was coming from with all her tough decisions....

And then Slade Wilson shows up.

When it happened it didn't really sink in for me. No way Moira Queen is dead.  Nah.  Couldn't be.

I don’t even know if I can properly express how I feel right now.  It’s traumatic.  Facing death Moira still focuses on protecting her children.  She offered herself not only to save Thea but also to save Oliver from having to make the same choice he made on the island.   And for a minute there, as Slade put the gun away, I thought it worked. I really thought this was just another mind game from Slade at that there was no way he’d follow through and actually kill either Moira or Thea.

And then he pulled the sword out.

Listen only Duncan MaCleod has been able to keep a sword that smoothly hidden under a trench coat.  Slade ran Moira through with the sword….THEN HE WIPED THE BLOOD ON THE SWORD OFF ON THEA’S SHOULDER.  Then he left Thea & Oliver laying in the words with the ominous words of there being one more death necessary.   This last scene is why I scoff at people who dismiss Arrow as a bad TV show or because it’s on CW think it’s anything like Smallville.  It is not.  We're left looking at Moira's lifeless face as Thea cries and Oliver lays there unable to do anything (his leg was still fucked up from Roy).  And Slade Wilson just leaves them there.  So cold blooded.  I’m now faced with a dilemma.  After the events of this episode, I feel as though Oliver HAS to kill Slade. I mean…he killed Momma Queen.  That’s a fade on sight order. But Manu Bennett has been so diabolical as Slade Wilson, I want his character to live on and continue to popup and give Oliver hell throughout the series.

This was a very good episode.  Even before the end, I thought there was enough here to really open up some questions about the future (Oliver being broke, Roy, Sara leaving, etc).  But the ending just put the cherry on top.  It was a devastating turn of events.  Even if you didn't like Moira before this episode, when you really come to see what she's done for her family, you have to feel something by her death.  Worst thing is?  Slade's still not done.  Oliver and them still think Isabel is dead (I liked the throwaway line about them being confused her death wasn't in the papers).  The preview for next week shows Slade's mirakuru army in Deathstroke masks walking through the city looking like when Eminem took over the MTV Music Awards performing "The Real Slim Shady".  Man listen......