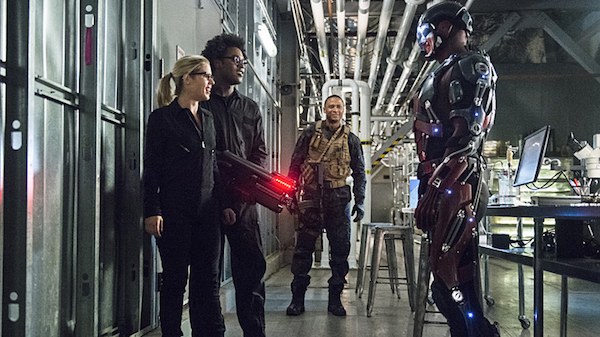 This season of Arrow seems to be free to explore some aspects of characters outside of Oliver that we’ve never really talked about. In this episode, Lost Souls, we get to really look at the relationship of Oliver and Felicity. It’s one of those things act we typically don’t see discussed by folks more interested in “shipping” characters versus really developing them. Outside of putting to “hot people together”, the Felicity-Oliver relationship really hasn’t been developed. Lost Souls actually explores WHY they love each other and I think it does it pretty well. 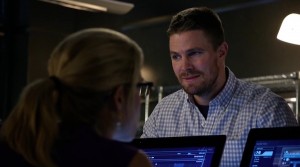 At first this episode seemed like it was going to go the typical love triangle route with Felicity torn between Ray and Oliver. I’m really glad they didn’t go that route and made it a lot deeper. The key was bringing back Charlotte Ross as Felicity’s mother and the conversations they had. We don’t really think about the troubles Felicity might have with relationships because of her mother and father. We got a glimpse of those issues with the episode that focused on her background last season but it’s one of those things that just didn’t register. You’d think that the person in the relationship with the most hang ups would be the guy running around on roof tops with a bow and arrow. But Felicity’s concerns about losing herself in Oliver is a legit issue that people have in relationships. If you’ve never had a successful relationship, then getting into a serious relationship can be scary and bring a lot of doubt into your mind. Particularly if you watched your parents fall apart. It’s rough. I also love that it was Felicity that was having commitment issues and not Oliver. Typically its the guy that’s shown to be running away from the woman or having doubts about the relationship. If you think about it, Felicity helping Team Arrow when her and Oliver left was kind of her way of not completely giving into her feelings about Oliver. I definitely believe that she had some legit feelings of guilt about being with Oliver after Ray died and those came rushing back when she found out he was alive. Not so much that she was still in love with Ray but that is someone she cares about and she felt that she let him down by being happy. Which is ironically sounding a lot like how Oliver used to feel.  Truth be told after this episode I feel like the Felicity-Oliver relationship has elevated to actually being more than just superficial but actually a pretty solid pairing.

Ray Palmer's Back
Its no doubt that the early part of this season is about connecting and seeding the upcoming Legends of Tomorrow. Normally this could be annoying but I think Arrow has done a great job of bringing in these characters and not feeling like the main story is on hold. Everything has tied back to Damien Darhk. Here with Ray Palmer, we have the storyline of Felicity and Team Arrow trying to rescue Ray but he’s been captured by Darhk. We know that Darhk is looking to use Palmer’s tech for some plan he has for the city. The question is going to be what is Darhk up to? I’m also interested in what Ray is going to do now that he’s alive. He didn’t seem to be in a rush to come back as CEO and I think with what we know about Legends of Tomorrow he might look to go into being a superhero full time.

Sara’s Back But Not Really 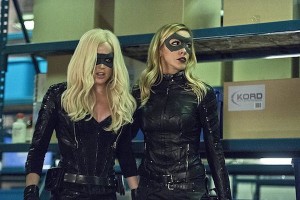 So if Constantine helping to restore Sara’s soul didn’t help her, so what does Sara need? And what does this mean for Thea? There has to be some way for them to calm this bloodlust. Ra’s Al Ghul used the pit often and while it no doubt affected him as well, he never showed this kind of out of control behavior and rage. There’s no way allowing Thea and Sara to kill a bad guy every few weeks to calm their bloodlust can be an acceptable compromise. I will say it was nice seeing the ladies kicking ass together in the field. We got Thea, Sara and Laurel all suited up and fighting together. It was a pretty badass scene. If you add in Felicity, the lades of Team Arrow outnumber the men. It was great seeing Sara suited back up (even though she was a bit out of control) and I do look forward to seeing her on Legends of Tomorrow. Oh and one thing, it was Laurel who said that Sara probably shouldn't go because they still weren't sure if she was ready and Oliver was the one who said it was fine. If the roles were reversed, people would have blamed Laurel for being selfish and not listening to Oliver. I'm just saying. 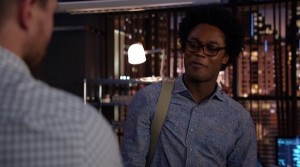 Curtis remains my favorite character right now. He had two really great moments. The first is when Oliver shows up at the office and Curtis puts his hands up to cover Oliver’s eyes to try to see if he could be the Arrow. Curtis has to put it all together. He’s too smart and observant and he pretty much broke it down when he met Oliver. No way he doesn’t know (even though he played it off). The second was when he base jumped with Felicity into Darhk’s facility. It’s official, he’s part of Team Arrow now. Once you risk your life like that you’re in the group. I don’t care.  Plus, as I said before, he’d be a good replacement for Felicity if she is the one who dies. While I was pretty confident earlier in the season it wouldn’t be Felicity, all the signs are pointing towards her being the one who dies. Granted that would be a great reason for her not to be (its too obvious) but the evidence is stacking up against her. Oliver is happy with Felicity and they’ve finally had a chance to really talk and discuss their feelings and we can see why they’re a good match. Then there’s the fact that Darhk learns that Ray was talking to Felicity so obviously that puts her in his crosshairs. Yeah it’s not looking good for her right now.

Another solid episode this season. I think this show is doing a good job at bouncing back from last season. While there’s still a lot of setup going on, I feel as though its quality, entertaining setup. We don’t get a lot of insight into Damien Darhk’s plans but we get enough of him to realize how big of a threat he can be. He’s come across the Green Arrow twice now and both times I’m left thinking “I don’t know how Oliver can beat this guy”. I definitely like the direction they’re heading.