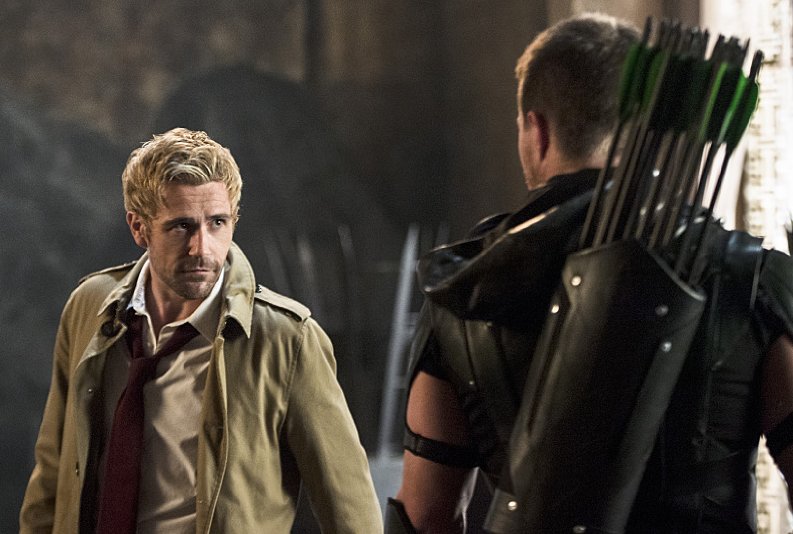 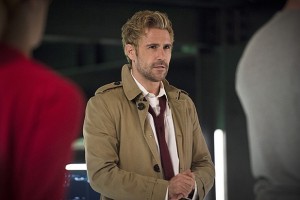 So this was the much anticipated episode for Arrow that featured Matt Ryan’s Constantine making an appearance. Stephen Amell was a big part of the campaign to save the show saying he’d even be up for an in-character cameo for any network that picked it up. Unfortunately the show still got canceled but the campaign at least worked to get Constantine to be featured in an episode of Arrow. I have to say, it’s a shame that Constantine got stuck on NBC. At the time it got canceled Constantine was on a moderate uptick with its story and script. It started rough out of the gate but started putting together a solid show. In comparison, it was the opposite of Gotham - which started strong and since then has descended into terribleness. This Haunted, used Constantine pretty well. We even got a little bit of sword action from Constantine which is something we never got before (and it was done pretty well).  They also tied him into the flashbacks. I know folks are not really feeling the flashbacks but that’s because they never reveal their true purpose this early. I’ve With Constantine being in the flashbacks, I’m going to assume that something is going to tie to Magic or HIVE/Darhk. Constantine even mentions at the end that Oliver should leave town versus dealing with Darhk. While I know they said this was a one-shot for Constantine, with Darhk’s powers being right up Constantine’s alley, I wouldn’t be surprised if we got another late season cameo. Remember last season they made it seem like there would only be 1 cross-over with The Flash and we got…several. So I’m not betting on this being the last appearance of Ryan’s Constantine.

Relationship Reset
This episode completes what I’ve seen as a relationship reset for all the major players at the beginning of this season. It’s symbolized by the political consultant telling Oliver he should distance himself from Laurel and Oliver deciding instead to solidify their friendship. This episode pretty much completes that. Not only do we get Oliver confronting Laurel and Thea about their lie about the trip to Nanda Parbat but Captain Lance is forced to tell Diggle that he’s been working with Damien Darhk. I think this was very important mainly for Oliver. For three seasons eh’s been so hypocritical with his stances on things. He’s been King of “Do as I say, not as I do” and then failing as others come in to clean up his mess. Think about it, Season One, Malcolm was pretty much able to succeed, Oliver just helped to limit the damage. Season Two, he lost his mother and his company and struggle to ask fro help when he needed. Season Three, instead of trusting at the very least, Diggle with his plan, he opts to not tell anyone and then…needing their help anyway. So after three seasons of that, Oliver’s come back and is trying to be more open and depend on his team, but they’ve now all taken to lying and keeping secrets. Laurel said to Oliver the same thing I said when it came to her lying about taking Sara to the Pit. Oliver did worse. He kept that secret from her and Thea and then is trying to judge them when they acted on their own and didn’t tell him. Oliver’s lies are what start this mess. I think now that this has all been put out into the open, the team can come together and finally work and trust each other fully.

Curtis is a Great Character
Curtis is becoming such a great character, I’m hoping he takes on a larger role. What’s so great about Curtis is that here we have a gay black male character but he hasn’t become a stereotype. His interactions with Felicity could easily become the “Gay Best Friend” trope but haven’t. If it wasn’t for casual mentions of his husband,we wouldn’t even know that he’s gay. He has his own mind and doesn’t just go along with whatever Felicity. Curtis is really just the nerdy tech co-worker we all know and I think that’s great.

A Word About Laurel 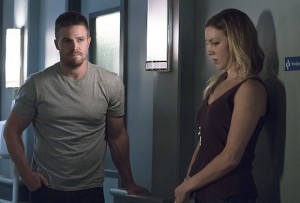 Look, I get hating a character on a TV show. It happens. I hated Lori Grimes and smiled during her death. But at this point the hate Laurel Lance gets on Arrow is reaching all time highs of annoying because it gets to be so irrational. I get it. The character wasn’t written well at first. then they introduced Sara as Canary and due to 5 years of League of Assassin’s training she was a badass. So, yes, on the surface Laurel is a let down. She’s not as good of a fighter as Sara and she’s selfish and makes bad decisions. What people are missing though is that Laurel’s the only person we’re witnessing making transitions. Oliver transitioned into who he is because of 5 Hellish years (on and off) the Island. Sara had 1-2 years on the Island then more years with the League of Assassins and came back just a female version of cold Oliver. Thea went off with Malcolm Merlyn for some months. Laurel’s been the only constant who we have to watch deal with everything in Starling City. I say this all the time but folks forget how much loss and emotional rollercoasters Laurel has suffered through.

That’s not even everything. Look, I don’t know about you all. But if all that happened to me? I’d probably be a little selfish and stubborn sometimes too. I think its important to remember all the things that a character has dealt with before we start thinking about how stupid they are in a particular moment. Everyone else has an outlet. Laurel hasn’t. The people she used to depend on either abandoned her  (Her mother) or  are hypocrites (Oliver & her father). So we’re watching someone struggle to find an outlet and way to deal with the horribleness they’ve dealt with. It’s easy to view her actions as selfish but really ask yourself when has anyone on this show really sat down and cared about all of what Laurel’s gone through? When they need her for something she’s there for them, but that’s not reciprocated (emotionally). Just something to keep in mind. That’s why Oliver admitting how terrible of a friend he’s been was important. I think this episode should be a turning point.

The one thing I wonder about is what does this all mean for Thea? Sara has her soul back so I'm assuming that removes her bloodlust but what about Thea? Thea is under control now but what happens when that bloodlust comes back? Why couldn't Constantine do something to help her as well? That's one of the few flaws I see in what they did with Sara. I guess they could make the argument that because Sara was dead for so long this could work, but I still don't see how a smaller version of it couldn't help Thea. The Pit works on mystical forces, the least Oliver could have done was ask about his sister. Oh and was Diggle's brother really dirty or was he just deep cover for ARGUS? I think there's still more to this than we know.