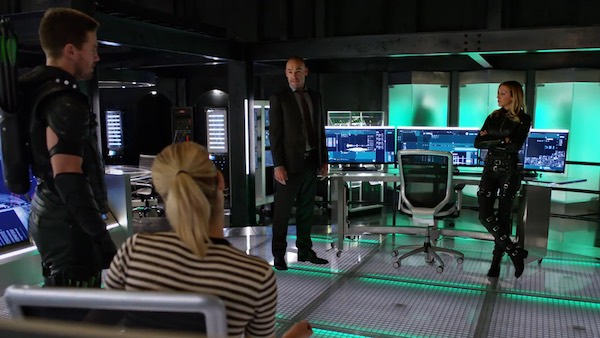 This was a pretty great week for comic book TV shows. Agents of Shield and The Flash had some of their best (if not THE best) episodes of their series. Supergirl debuted and while there are some things they need to work on, it was still a very solid debut. Even Gotham had a good week. I think By Fire was the best episode they’ve done all season. So that left it up to Arrow to bring it’s A game and I believe that’s exactly what they did with Beyond Redemption.

To help with putting together the best episode of this season so far, Arrow decided to bring in fan favorite, Lexi Alexander to direct. Punisher Warzone has a solid cult following and many of Alexander fans wonder why she hasn’t gotten calls from studios to helm a bigger comic book movie with a decent budget. Until thing we’ll have to live with small things like directing episodes of Arrow. 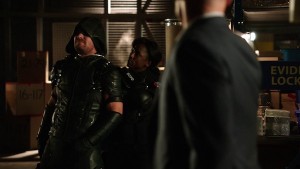 I really enjoyed how this episode showed us the problems with Starling City are more than just the Ghosts. I was really waiting on these rogue cops to be part of Damien Darhk’s plan but it turns out they were just dirty cops. What elevates this episode though is their motives. Arrow has done a better job of portraying Gotham than Gotham has. Starling City is under siege by a main villain and the citizens of it are feeling the pressure. These cops are robbing drug dealers not because they’re greedy but because they want to feed their families. Of course they’re crossing the line but they feel abandoned and desperate. It was also a smart decisions to make them part of the former Vigilante Task force and therefore able to hold their own against Team Arrow. This really drives home the point that Oliver is going to need to do more than just put on a mask to deal with saving the city this time.

Oliver has repurposed Sebastian Blood’s old campaign headquarters not only for his mayoral campaign but also as Arrow Cave 3.0. Cisco and STAR Labs helping to upgrade the hideout is was a smart way to strengthen the connection between the two shows without needed a big crossover. One thing I noticed, when Oliver and Felicity show up, Thea asks Felicity “Why aren’t you wearing it?” Felicity had her left hand up at the time and I believe Thea was asking where the ring was. So Thea knows Oliver was going to ask Felicity to marry him and thought that’s what the big announcement was going to be. Oliver still hasn’t gotten around to and it makes me wonder, will he ever get the chance? 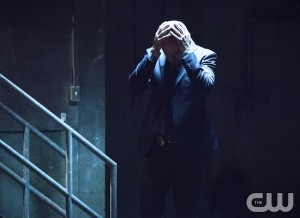 The relationship between Captain Lance and Oliver Queen has always been contentious and for good reason. Oliver is the catalyst for Captain Lance’s family falling apart. Sure there were underlying family issues but had Oliver not taken Sara on the trip with him, the Lances might still be a cohesive family. So Captain Lance’s distrust and contempt for Oliver makes sense. Beyond Redemption explains why Oliver continues to try to fight for respect from Lance. In previous seasons, I thought it was just Oliver’s guilt for dragging the Lance family into this mess. However it turns out that Oliver’s real reason is that he actually admires Lance and saw him as a better man that Oliver could ever be. In a way, Oliver looks to Captain Lance as a father figure since his own is gone. Remember, Oliver’s mom wanted him to step up and work at Queen Consolidated and do something with his life. He ran from that. Now, this season, Lance’s words to him had such an impact that Oliver is running for Mayor. He even goes to Captain Lance for his support, knowing that he wasn’t going to get it. In a way Oliver is seeking approval from Lance just like a son would.  When Oliver finds out that Lance is working with Darhk, that pristine image of Lance is shattered, just like the image Oliver had of his own father. It was at that moment Oliver finally had enough and had to put his foot down with Lance. Lance constantly berates Oliver for not doing the right thing only for Oliver to find out, Lance is no different than him. The ether line from Oliver:

[quote]“Stop hiding behind your daughters. They would be ashamed of what you are doing right now.” [/quote]

This was hands down one of Stephen Amell’s best performances on this show. Paul Blackthorne was outstanding the entire episode. Between this scene and then the one where he almost shoots Sara, he was really selling these scenes. Having heard what Oliver said about Lane this episode, I’m also now adding Captain Lance to the “Death Watch” list. Think about it. Oliver looked to Lance as a father figure and Lance is deeply ashamed of what he’s done. His speech to Liza wasn’t just about her but about himself. The name of this episode is called “Beyond Redemption” and I can see Lance eventually sacrificing himself as his finally way of redemption for what he’s done. Oliver is disappointed in him now but Lance is still a father figure to him and has motivated Oliver to do more. That could be devastating if he ends up dying. So right now I have Felicity, Diggle and Captain Lance on my death list.

The Softer Side of Damien Darhk

Damien Darhk is becoming an intriguing figure. Episode 1 set him up to be this guy who is ready to destroy the city and anyone in his way. But then he also got upset in episode 2 when the daughter of the mayoral candidate was kidnapped. Then this episode he’s actually giving Captain Lance some fatherly advice on what to do with Sara. Granted, it involved killing her, but that’s because Sara’s soul was gone and all that was left was a shell. That’s what makes Darhk such and interesting character. On the one hand, he’s getting Lance to help him by threatening Laurel but then on the other hand, he’s giving Lance some father-to-father advice. He doesn’t even push Lance as to how Sara came to be resurrected by the Pit. Family is clearly a soft spot with Darhk and it makes me curious to find out more about his own family and what’s motivating him. 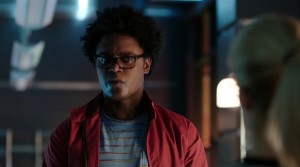 I’m really enjoying Curtis on this show. I call him Arrow’s Cisco because his scenes, while not a lot, really do stand out. First there was him trying to guess who the Arrow as. Then there’s the fact that he really is like a mirror in front of Felicity when it comes to letting her see just how random she can be. The best moment for me though was when he told Felicity that he didn’t understand why she wouldn’t want to hear the message from Ray. Felicity need to hear that. It’s also why I don’t get the people who don’t like that they’ve made the future Mr. Terrific gay. I understand that in the comics the death of Holt’s wife and unborn child are huge motivators for him, but this could still happen on Arrow. Holt is married and his husband could be killed and that could meant that he can no longer adopt a child. Just because the sexuality has changed doesn’t mean, the motivators can’t be the same. Truth is, I expect a bit of a change anyway since the death of Ray’s wife is the huge motivator for him and I can see this show not wanting to make it too similar. Speaking of Ray, I feel like not only was the message in Felicity’s phone from Ray but also the issues with the system in the new hideout.
[divider]
Overall this was the best episode of the season so far. As a whole, I’m really loving the way season 4 is progressing. I enjoyed last season but it did seem a bit disjoined. This season has a much better linear progression to it. What makes it so good is that just like The Flash, the beginning of this season is clearly setting us up for Legends of Tomorrow. Right now on Arrow we’re setting up Sara’s return as well as Ray Palmer’s. Yet it doesn’t feel forced.  Part of this comes down to finally giving Oliver Queen some purpose outside of just putting on a mask and embracing being a hero with his teammates. That has helped tremendously and I look forward to to seeing more.