Arrow Review: S3E8 – The Brave and the Bold 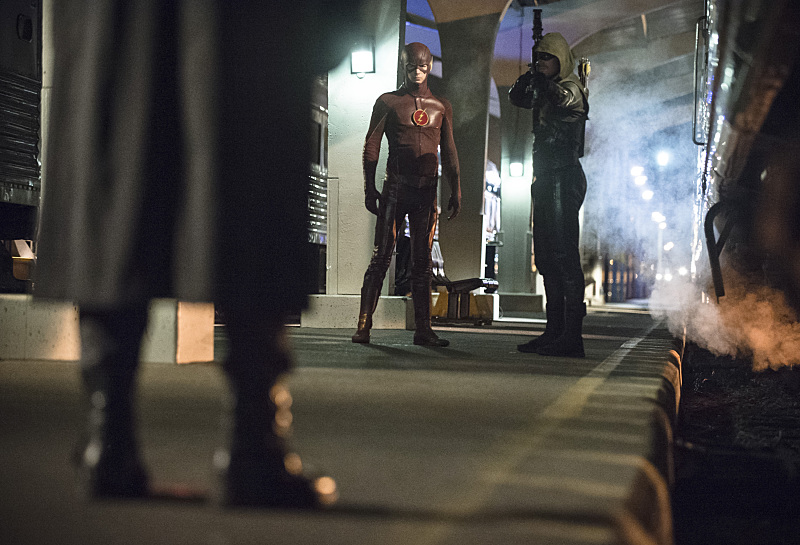 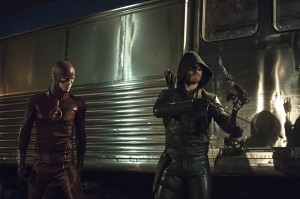 Tuesday night we got part 1 of the Arrow/Flash crossover and Wednesday was Part 2.  You can check out my review for Arrow vs Flash here.  I’ll be honest, after how excited I was at the end of that episode of The Flash, I was wondering just how Arrow could live up to that.  Well, The Brave and the Bold not only lived up to the hype from Part 1 but it exceeded it.

One of the few complaints I saw from the part 1 of this crossover was that at the end there wasn’t any direct link to the fact that there would be a direct tie-in to the next episode of Arrow.  That didn’t bother me because 1. I liked that Arrow vs Flash was a standalone episode and 2. I knew that it was probably written that way on purpose.  And having seen this episode, its clear that they wanted Barry and his crew coming to Starling City to be unannounced.  So I’m fine with how they did it. 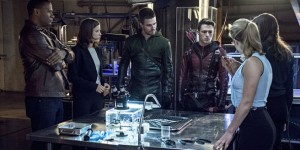 Since I’m mentioning sidekicks, I don’t care what anyone says, Cisco is my dude.  If you’re a nerd you gotta love Cisco.  He speaks the stuff we all think and while he’s definitely got poor timing with some of his jokes, they’re what some of us are thinking.  I can only imagine if I walked into the “Arrow Cave” I’d be trying to touch all the stuff too.  By the way, how cool is it that Cisco called it the “Arrow Cave” which is what we’ve all been calling it?  And he’s right, Roy’s red costume is better than Oliver’s.

Just like in Arrow vs Flash the centralized theme in this episode is the differences between Barry and Oliver  I mentioned in my Flash review that this is really CW doing a Batman/Superman dynamic and it doesn’t bother me because it works.  Oliver and Barry are very different.  Even the cities they serve are.  Oliver pointed out something we as the audience always notices but he says that Central City is sunny and Starling City is dark.  But I think Oliver and Barry make a good team because each of them needs each other.  Oliver has been letting his humanity slip away, particularly since Sara was killed.  Barry hasn’t been really taking things as seriously as they should.  One of the most interesting moments in this episode is when Roy, Felicity, Cisco and Caitlin are talking in the bar and Caitlin says that they (Barry and the others at STAR Labs) haven’t been taking this seriously.  They didn’t consider the real threats to those they care about and it’s probably because dealing with metahumans makes things seem less real.  Barry got that rude awakening when he saw how Oliver deals with criminals.  But the flip side of this is that Barry helped Oliver see that he doesn’t have to completely lose his humanity to be a hero.  I think think what also sells these scenes so well is that Grant Gustin and Stephen Amell have great chemistry together.  Truth is, the casts of both these shows work well together in this mini-tv universe. 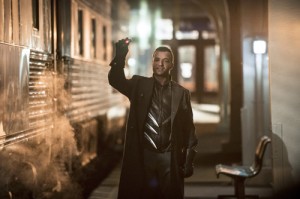 One thing I think that made this episode even better than the Flash one is that Captain Boomerang was a pretty badass villain.  Nick Tarabay was pretty cool as George Harkness.  I mean he broke into an ARGUS facility and took out most of the people in there, then took on Oliver and Roy at the same time.  They’re definitely putting Harkness on the back burner to use again at another time and I’m okay with that.  He’s a solid villain and threat not only for Oliver but for Barry as well.  Let’s be honest, boomerangs come off as kind of a wack weapon even if they aren’t.  But they made Harkness’ pretty bad ass.  And he can accessorize them like Oliver’s arrows.  While Captain Boomerang is typically a Flash villain, I like the idea of introducing him on Arrow since he’s not a metahuman.  I didn't even mind his overuse of the "things always come back to haunt you" line. 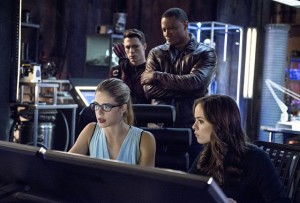 If I had to find one thing to complain about I guess I could say they were a little too obvious and heavy with the foreshadowing with Lyla & Diggle.  By the second time Diggle said “We’re not married” I knew by the end he’d be popping the question to Lyla.  Don’t get it wrong, I’m happy for both of them though. It’s funny, their relationship reminds me of Barry & Oliver’s to be honest.  Diggle  keeps Lyla from going too far down the ARGUS/Waller rabbit hole and Lyla reminds Diggle the world and decisions aren’t that simple.

Because like in the episode of The Flash there are a lot of small things that I want to point out, I’m going to put a little list here to try to cover them all:

Man this was a great episode and one of the best crossovers I’ve watched.  Both episodes fit the tone for their respective shows AND also gave us some great character development and moments.  I was originally worried that these episodes would be gimmicks but they were anything but that.  Now I’m even more hyped for both these shows and I really want to see them team up again..