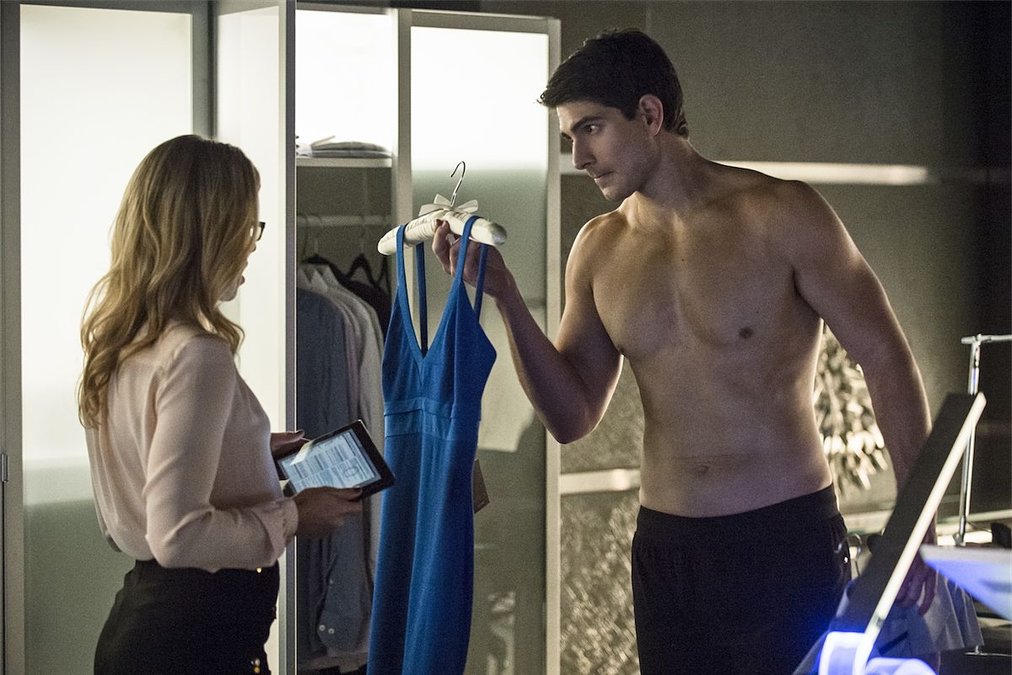 Arrow is still laying the ground work for what it wants to be in Season 3 and how it’s going to handle all of it’s characters.  Draw Back Your Bow was a surprisingly significant episode that I wasn’t expecting going in.  Cupid turned out to be a pretty cool villain of the week (and possibly more) and there were a lot of significant developments around the characters.  I continue to think that this is all set up for something larger going on this season and that we’ll be picking up soon. 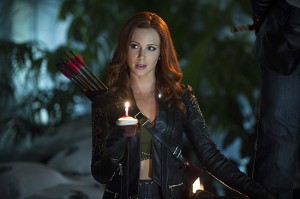 Like I said, Cupid was  a pretty good character.  Amy Gumenick was actually one of the actresses who originally auditioned for the Black Canary role and I have to be honest, I kinda which we could have seen her in the role.  She actually has pretty good chemistry with Stephen Amell and I can’t help but wonder now what it would have been like to have her in the role of either Sara or Laurel.  But no worries, we’ll definitely be seeing more of her.  Looks like she’s replaced Harley Quinn on Waller’s Suicide Squad. That’s definitely going to cause some conflicts later.  By saving her at the end, Oliver might have just “proven his love” for Cutter and I expect her to be even more infatuated with him the next time they meet up.  I loved the fact that they tied this back to Oliver saving her during last season when Slade’s soldiers were attacking the city.  Also, shoutout the eagle eyed fans who noticed Cutter in some scenes from previous episodes.  She’s definitely been stalking Oliver. 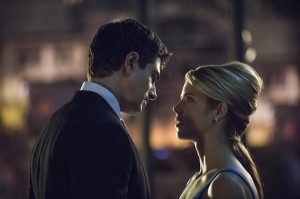 One of the interesting things about Cupid was that they were able to use her in a way to address the awkwardness between Felicity and Oliver these last few episodes.  Here’s the truth:  Felicity and Oliver can’t be together.  I know a lot of people want that, but it just can’t be.  But they both love each other so this show has to address it. It’s reasonable to expect Oliver to be extremely jealous of Ray Palmer taking Felicity out.  Remember, Oliver was kind of a dick to Barry when he first showed up because Felicity took a liking to him.  Ray Palmer is even worse than Barry because….he can be Oliver Queen.  Ray bought Oliver’s company, changed the name, gave Felicity a job that matches her talents, bought her a dress that damn near gave her an orgasm from just touching it and…..rented a $10 million necklace for her to wear.  Ray Palmer pulled out all the stops and Oliver sees in Ray, what he wishes he could be again.  If Oliver wasn’t the Arrow, he could be Ray Palmer and have the woman of his dreams.  Then again, if he wasn’t the Arrow,he might never have even noticed Felicity.  Also, can’t blame Oliver for being jealous, Ray and Felicity have great chemistry together.  Oliver walking in on Ray kissing Felicity right when he was going to try to tell her how he felt was perfect.  Because this might be the final nail in the coffin of them teasing this potential relationship.  Like I said, the relationship can’t happen but it also gives us potential for Oliver to develop the one relationship he needs to right now:  The one with Roy. 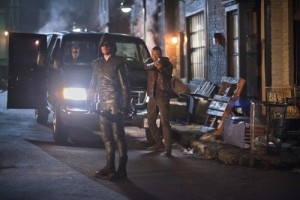 No guys, I’m not saying they need a romantic relationship.  The most significant piece of this episode was when Oliver went back to the hideout and was clearly pissed off and Roy was there and Oliver decided that since both of them were having issues, they needed to go to Diggle’s for dinner.  See, we’ve had 2 whole seasons and part of this season with Oliver still trying to maintain or pursue a normal romantic relationship.  That’s just never going to work.  But Oliver still needs emotional support and he still needs to bond with someone.  Who better than his mentee  who is also having a rough time with emotions and finding purpose.  I said this in my last review, but I think we’re going to see a significant increase in screen time and story for Roy.  He’s now officially called ‘Arsenal’ and I think it would do Oliver good emotionally to really focus on being a mentor and friend to Roy.  It’s not like the show would lose out on romance (it is the CW after all).  Clearly there’s something between Ray and Felicity.  Plus I’m curious about this new DJ/potential love interest for Thea.  I was confused by why we got so many scenes with both of them.  We didn’t even get Roy in those scenes to try to set up some kind of jealous/love-triangle angle.  So I think that the new DJ is going to have some significant role down the line even though he didn’t really fit into this episode.  But anyway, that’s two potential love stories right there.  A third if maybe there’s something between Ted & Laurel (both of whom we didn’t get any of this episode).  So maybe this is the first season where Oliver DOESN’T pursue a romantic relationship but instead builds a great friendship and partnership with Roy.  We know that Oliver trusts Roy but we also know that despite his increased skills, Roy still needs help and focus.  The end of this episode with Oliver taking Roy to Diggle & Lyla’s should be the start of them bonding more.  I also liked Diggle trying to give advice to Felicity and Oliver.  He's the "Old man" of this group and truth is, he sees through both of them.  After watching him in this episode,I really need to see Diggle meet up with Detective Joe West from The Flash.  The "black fatherhood" gems we'd get from both of them in the same episode would be priceless. 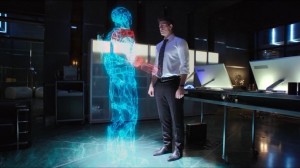 I have to point out some good geek out moments in this episode.  First we had Oliver breaking/dislocating his thumb to slip the cuffs and save himself & Cupid.  Hell, I was impressed by that whole fight between Oliver and Cutter.  Cutter has some moves and again, I’m glad we’ll see more of her on Waller’s Suicide Squad.  Also, we get a glimpse of Ray Palmer’s A.T.O.M. suit that he’s apparently working on.  There was a lot of talk about how we wouldn’t see Palmer suit up but this is why I don’t read too much into or worry about rumors.  We’re definitely going to see him in something. Then finally we get Captain Boomerang coming to Starling City.  That means we’ll be getting that crossover with The Flash coming soon.  Can’t wait.

I really enjoyed this episode.  I think Cupid turned out to be a great villain and they didn’t bother trying to lead us down the “Maybe she killed Sara route” (they got that out of the way pretty quickly).  They also used this character to expand on Oliver’s emotional issues and I’m hopeful that will lead to more development of his relationship with Roy and put aside any romantic possibilities for the foreseeable future.  Also, Ray Palmer and Felicity make a good team and I’m down for seeing more of it.  Great episode.