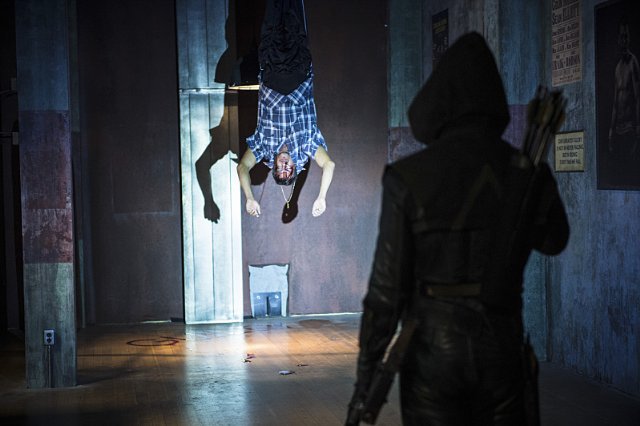 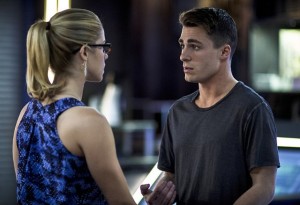 The mystery into who killed Sara Lance continues.  I’m enjoying that this show is keeping us guessing by really making us believe the “suspect” each week.  Everyone said last week that Roy killing Sara was an obvious red herring but we go through about 90% of this episode really believing that he actually did it.  We even got a few more clues as to how Sara died when Felicity explained that the arrows shot weren't from a traditional bow*.  I also enjoy the fact that they didn’t just use this as a ruse to keep us guessing but that it actually had some weight and purpose in Roy’s relationship with Oliver.  I really thought that Oliver was going to cut Roy loose and that we’d lose Roy for most of this season.  But then Roy shows up to help Oliver at the end and asks Oliver not to abandon him and I thought that was a pretty important moment in their relationship.  Roy looks to Oliver as his mentor and I want to see more. 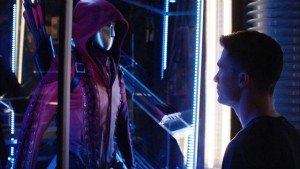 And that’s the problem with Arrow this season:  It’s too crowded.  Killing off Sara and having Felicity visit Barry Allen were nice ways of easing the character load on this show but they need more of this.  They had an out with Diggle but they’ve gone back from that.  I like the character of Diggle but Oliver has Roy now and Diggle should be back home focusing on his new daughter.  To be far we did get more Roy this episode but I was really hoping for a Roy centered episode because he needs it.  The writing on this show in previous seasons has dealt with this before and I’m certain they’ll do it this season.  I have a feeling might mean the death of Diggle, which I know people will hate, but at this point it has to happen. Either that or Diggle really has to go back to being Daddy Daycare.  It does not make any sense that Diggle is out here running point for Oliver with a ski-mask on while Roy, who has an actual costume (And now an official codename, Arsenal) is playing backup.  We even get Roy handling himself pretty well this episode when he took out Isaac.  He even had one of his power ranger flips finally work for him.  It’s time for him to handle most of Diggle’s role currently on the show.  I feel positive that he will because this episode had an out to get rid of Roy for a few episodes and they didn’t take it.  I liked that Oliver decided to double down and stand by Roy and not cut him loose like Ted did to Isaac. 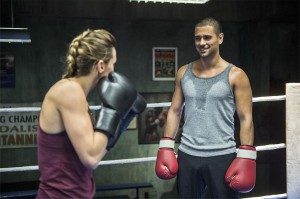 They really need to figure out this crowding issue particularly with Laurel set to take over his sister’s role as Black Canary.  I didn’t mind the picture leak of her in the new costume because at this point, it’s so obvious to see the direction they were going.  And if there was any doubt, her specifically going to Ted and asking him to train her to be able to avenge her sister removes any of that.  I know there’s been talk about how people don’t like Katie Cassidy but I think she has pretty good chemistry with J.R. Ramirez.  I  believe they’ll make a pretty good team, better than Laurel with Oliver right now.  I also like the fact that Ted will train Laurel and it won’t be even more crowding in the Arrow Cave.  Laurel's development this season has been very good and I think this was another good episode for her.  I like that every week, someone is telling her what she CAN'T do and that she keeps rejecting that and won't take "no" for an answer.  One annoyance I had this episode:  Oliver’s overprotective nature and hypocrisy.  I need them to stop writing Oliver this way. It’s Season 3, he should be past all this.  I’m hoping that Ted’s words to him, that he knows he can’t stop Laurel from doing what she wants to do sink in with him.  It also leads to a bigger issue though.  Oliver’s hypocrisy on this show is becoming almost too much to handle.  He really got mad at Ted because he thought Ted accidentally killed 1 drug dealer.  Oliver spent his entire first year back in Starling City….killing people on a notebook his dad left him.  He has no ground to stand on to lecture other people on being murderers.  Not only that, but while Roy didn’t kill Sara, this episode reminded us that Roy did kill a cop while he was under the effects of mirakuru.  Oliver made Roy his partner then later tries to comfort him into why Roy shouldn’t be too hard on himself.  Honestly, in the next few episodes I’m going to need 2 things:  1. I need Oliver to sit down with Roy and address his own murderous past  2. I need Oliver to accept that he can’t control Laurel.  I think these two issues are actually holding this season back for me because they should have been reconciled and dealt with.  I don’t mind Oliver wanting to protect those he cares about or not being down with folks killing, even if it is the bad folks.  But they need to tone down this tone of moral authority he seems to have with it.  Last season did a good job of addressing him going from being a killer to a hero.  But he still put 3 quick ones into Count Vertigo for threatening to kill Felicity.  Oliver isn’t far enough removed from killing himself to be judging other folks for their pasts, especially when it’s less deadly than his own. I did enjoy seeing Oliver & Ted mix it up a bit.  Ted is definitely going to be a good teacher for Laurel and I’m hoping that maybe we’ll see him suit up as well.  I also did enjoy getting some of his backstory of him being a vigilante.  Again, we're getting a lot of stuff that seems small out of the way early this season and I'm preparing for it to pay off big later. And hey, it got us the boxing glove arrow so that’s always good.  I loved that they took something corny from the comics and actually made it pretty dope and practical.  I also want to point out that Oliver’s time in Hong Kong seems almost as hard on him as being on the island.  I also know that these flashbacks will play a larger role at some point.  We haven’t seen Amanda Waller in present day yet this season and I don’t think that’s by accident.  I still think Waller has something to do with Sara’s death. She was willing to take down a whole plan to kill one person.  I could see her having Sara killed in order to draw out Ra’s or for some other nefarious reasons.  Her absence right now (when ARGUS has been mentioned several times) speaks volumes to me.

Make no mistake, I still enjoy this show and ultimately I trust that the issues will work themselves out.  The show seems to be putting things together slowly but in reality, the storylines are moving pretty quickly.  Thea & Malcolm are back in Starling.  Felicity’s back at Queen Consolidated.  Roy is now officially called Arsenal.  Ra’s Al Ghul has been introduced.  Ted Grant is about to start training Laurel to be a vigilante. Barry has visited Oliver and Felicity has been to Central City.  All this and we’re only 6 episodes in.  The only thing missing is for things to start coming together and that will happen.  How do I know?  Cause I went back and read my reviews for last season.  See, we only remember the end of Season 2 with Slade Wilson fucking up Oliver’s life royally.  But it was actually a slow build up to that.  So this season of Arrow isn’t fooling me.  I know the episodes leading up to the first break are all just laying the groundwork.  I’m actually thinking business will officially pick up when we get the crossover episode with The Flash.  That’s what this show does.  It has a slow climb up hill, then it’s an adrenaline rush to the end of the season.  I’m prepared for that.

* So as I was writing that point about the arrows not being from a traditional bow.....could this enter in The Huntress again as a possible suspect?  Remember, her and Sara did mix it up before.