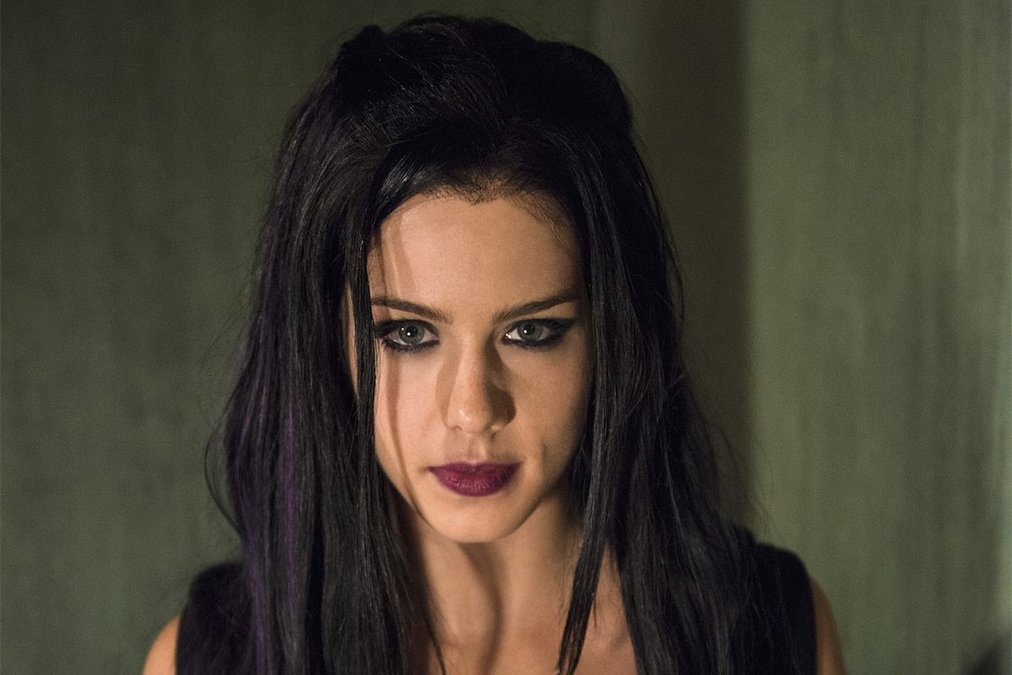 This week’s episode of Gotham took a page out of Arrow’s book and ended with a “Holy shit” moment itself.  Well, you know the writers of Arrow couldn’t be bested at their own game.  Just when you think you’re prepared for anything this show can throw at you, they find a new way to have you 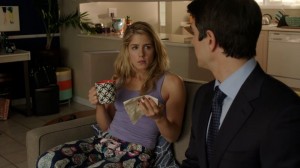 As hard as it is, I’ll deal with the ending of the episode later.  This is a Felicity heavy episode.  Nice to have considering she was missing from Arrow last week to visit Barry on The Flash.  It’s also welcomed because let’s be honest, we have 2 seasons in the books and we barely have any background on Felicity.  We would get a few hints here and there in passing from her ramblings but that was about it.  We never actually got anything solid.  So it was nice to finally get some background on Felicity and see how much she’s actually changed.  We’re so used to the quiet, good girl, the rebel goth hacker is a big change.  But it also explains why she’s so good at hacking and computers.  Felicity is essentially Oracle on this show.  Its repeated often from fans that Arrow is basically WB/DC’s attempt to do a Batman show without the headache of having people complain about it.  I’ve said before I’d be cool with a Birds of Prey spin off with Felicity in the role of Oracle. 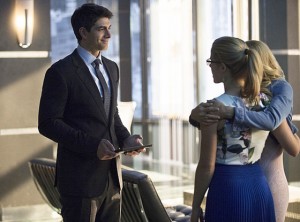 We also get an introduction to Felicity’s mother, Donna Smoak who is the complete opposite of her daughter.  I thought Charlotte Ross did a good job portraying Donna.  Their relationship is heavily cliched but it still works.  An interesting tidbit dropped was about Felicity’s father also being smart and leaving Donna (and Felicity).  The way Donna made it seem was that Felicity’s father loved his daughter and always spent time with her.  I know how this show works.  I fully expect this to come back up at some point.  They don’t just throw in that Felicity’s dad is as smart as her and he left (assumed to be still alive) for no reason.  I was okay with Felicity’s college boyfriend, Cooper Seldon, being Brother Eye but it was pretty predictable.  Sure they told us he committed suicide but I think we all knew that probably wasn’t true.  I just wish they sold us better on it.  Still, it was nice seeing Felicity become overwhelmed from something in her own life and past instead of from something Oliver is facing.  The character needd that.  I should also mention that while we don't get a lot of him this episode, Brandon Routh is still killing the role as Ray Palmer.  It now convinces me that Bryan Singer is actually a really shitty director and that Superman Returns is far shittier of a movie from the directorial and script side than we ever imagined.  Routh's been so charismatic yet mysterious in this role.  I can't tell if he's interested romantically in Felicity or if he's just a super nerd that's so focused on his work (Or both).  I also noticed when Felicity talked to him about the feeling when something you created goes wrong.  Can't wait to learn more about Ray. 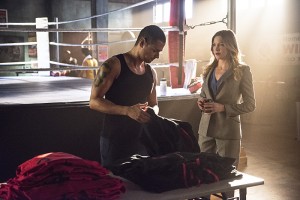 This season is started off with a little less action than usual but I think that’s because it’s building to something big.  Oliver does have his team pretty well trained and they’re almost to the level of Rick and his group on The Walking Dead.  Felicity used the same move on Cooper that she used on Deathstroke.  It was also nice to see Roy shooting his arrows instead of doing unnecessary Power Ranger flips.  It is pass time they got Diggle a costume though.   As someone on my timeline said, they have him out there looking like a police sketch.  This episode started with a training montage with Oliver/Roy, Thea/Malcolm and Laurel/Ted (and technically Felicity and her 10 situps).  I love training montages.  I can’t wait to see Ted get Laurel’s anger under control.  I think the character has grown a lot since Season One and I’m ready for her to finally become what she’s destined for.  She’s more assertive and takes charge more, but as Captain Lance said, she’s almost out of control with it now.  She needs focus and hopefully she can get that. 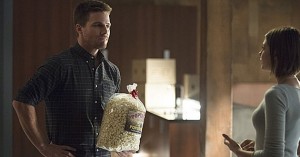 Thea and Oliver’s relationship is interesting.  They’ve completely switched roles.  Thea is now lying to Oliver with Oliver trying his best to be as honest as possible.  Thea is now doing that “half truth” thing Oliver used to do (he’s now more of a 3/4 of the truth guy).  She admits that she used Malcolm Merlyn’s money to buy the apartment but that she inherited it, not that he gave it to her.  But it also seems like Thea genuinely wants to have a relationship with her brother.  It also looks like, while he’s clearly jealous of the relationship, Merlyn really just wants to protect and watch over Thea.  Oliver moving in with Thea means I can also stop wondering just where the hell he’s been living all this time anyway.  One thing I noticed is that this episode Oliver called Thea ‘Speedy’ more times in one episode they he ever has.  Hell, he might have called her Speedy more times than all the other times on this show combined.  I don’t think that was by coincidence.  This show never does things like that.  This might have something to do with that jaw dropping ending….

So did Roy do it or is this just another red herring?  We’ve known sense episode 2 that Roy’s been having trouble sleeping and that something hasn’t been quite right with him.  Could he actually be Sara’s killer?  While it’s definitely a “Holy Shit” moment, I’m still not buying it.  It could just hallucinations caused by leftover side effects of the Mirrakurru.  I’m still sticking with my Amanda Waller theory but who knows, it could be that Roy was brainwashed and is being used by someone (maybe Waller).  So if he did it, I don’t think he had any real control over it.  But as I mentioned above, Oliver called Thea ‘Speedy’ a lot this episode.  Could we see Thea take over the mantle at some point.  She’s getting some pretty good training.  While I’m tempted to believe this, it’s hard for me to believe that Oliver would ever allow his sister to do anything that dangerous.  I tell you one thing, this show knows how to keep me coming back each week.

I really enjoyed this episode.  It was a nice break from the team trying to find Sara’s killer and it finally gave us the background on Felicity.  All in all a pretty good episode  Oh and tear gas arrows!  Oliver’s finally building up quite an arsenal of arrow tips now.