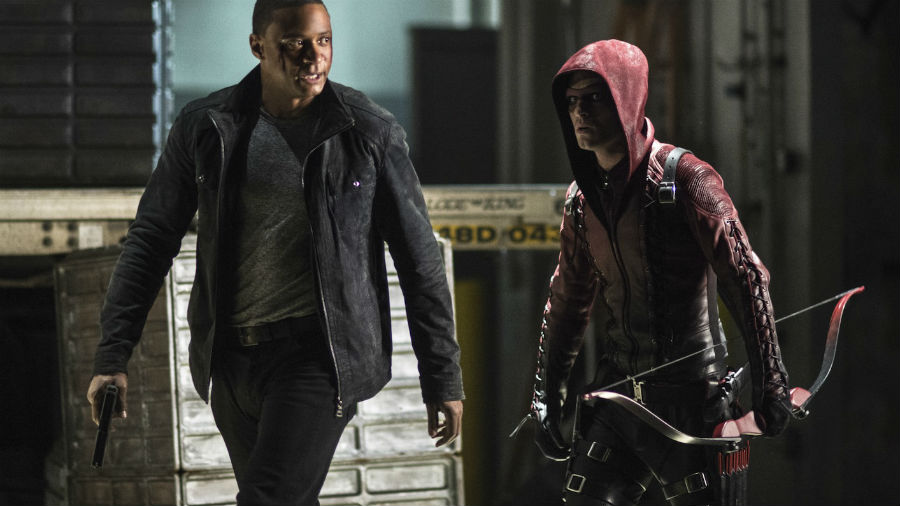 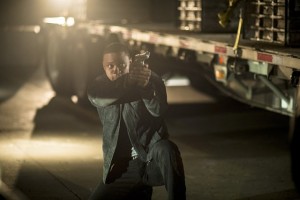 Arrow is back and Oliver Queen hasn’t been seen since he left to go challenge the head of the League of Assassins.  Roy and Diggle are trying to fill in but it’s not the same.  I think what’s going to be interesting the next few episodes is watching Roy & Diggle realize they can’t fight crime the way Oliver did and that they’re going to have to find their own way.  I liked seeing Roy get some action and Diggle has some moves himself (you see that slide?).  But they aren’t Oliver so they’re going to need to find different approaches to this.  One of those approaches is that I think they’re going to have to be more open to help than Oliver ever was.  This is clearly going to open the door for more vigilantes in Starling City.  When Oliver is back, it will be interesting seeing his response. 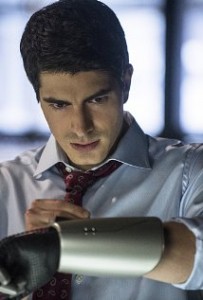 It’s no surprise that Felicity has finally broken down.  Three months ago her friend Sara was killed.  Now the man she loves, Oliver Queen is dead.  Before that the man she was attracted to was struck by lightening and fell into a como for several months only to wake up and be the fastest man alive.   Oh…and her ex-boyfriend from college kidnapped her and her mother.  And before that………you get the point.  Out of everyone that’s involved in helping Oliver, Felicity was always the one most not cut out for it.  Diggle is ex-ARGUS, Roy grew up in the streets, hell…even Laurel grew up as a cop’s daughter and can handle herself pretty well.  Felicity though?  She was just an IT girl working at Queen Consolidated who got weird requests from the CEO of her company until one day he popped up bleeding in the back of her car.   I jokingly called her a “Superhero Groupie” but in each of her love interests (Oliver, Barry & Ray) she’s kinda stumbled upon them being heroes.  It makes sense that she’s at her limit.  That’s why it was so hard emotionally to see her struggle with trying to accept that Oliver was gone.  She’s just not really as cut out for this as the others.  We know she’ll be back but it’s also a lot for her to deal with.  And to go from Oliver to now seeing Ray with the same obsession it’s just too much for her.  The scene between Ray & Felicity was very good.  Felicity had an impassioned plea and Ray was not pleased with her invoking the name of his fiancee. Felicity will be back to help Roy & Diggle and she will also be back to help Ray.  Because while she’s reached he emotional limit right now, in the end she still cares about all of them and will do what she can to help and protect them.  And right now, there’s no one better for support behind the monitor than Felicity. 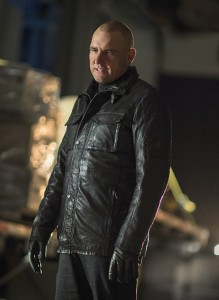 Vinnie Jones as Brick seems like he might be a legit villain especially now that Oliver is gone.  He’s big, tough (seems to shrug off a Diggle bullet to the head) and has a pretty good plan for pulling together some of the street thugs Oliver’s been busy putting away.  I really like that they tied this to all the work Oliver and his team have been doing since stopping Slade. I also like that Brick’s plan was to steal all the evidence linked to these criminals so they could walk.  With Oliver gone, there needs to be significant increase in crime in order to make it necessary for other vigilantes to pop up.  Diggle, Roy & Felicity (who we know will be back) can’t do it all alone.  Ray’s working on his ATOM suit and the end of this episode we see that Laurel’s clearly suiting up to help.  We only get a few seconds of her but Laurel’s entrance as Canary was pretty badass.  It’s been a long time coming.  I’ve been rooting for Laurel ever since she hit rock bottom last season and started to build herself back up.  I’ve seen folks say the show killed the wrong Lance sister but I really think Laurel’s Canary is gonna shock folks.  She had a nice statement about they need to honor Oliver by not letting all the work he’s done over the last few months just unravel.  She’s more determined and in control and I’m happy to watch this transformation.  I’m wondering if Ted Grant will join in on the action.  I’m also wondering about Thea.  We got another scene of her sword training with Merlyn and she almost killed him with that dart.  I wouldn’t be surprised if we see Thea suit up at some point.  She’s clearly skilled enough for it.   That then leads me to the inevitable Thea-Laurel showdown over Sara’s death.  While I don’t think Laurel would blame Thea, if they did end up fighting, my money is on Thea.  Laurel’s been training but when your father is Malcolm Merlyn, that’s just better training. 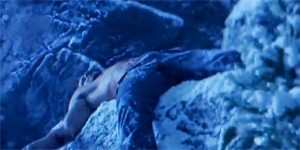 Now for the real controversial part of this episode:  The revival of Oliver Queen.  The writers for this show had a difficult balancing act to maintain.  Ever since the mid-season finale when Ra’s “killed” Oliver, every time a promo posted about his death all you could see is “we know he’s not dead”.  Because Oliver Queen is Arrow and no matter what they do, he has to come back.  So do they string us along or do they just let us know, he’s not dead but also not in any shape to come back to Starling City? They opted for the latter and I think it’s for the best.  They could have waited another episode but why?  Why string along something that has no suspense to it? Instead we can get right back into how Oliver is going to get himself back into shape to return.  If you look at IMDB and the synopsis for the next few episodes you can see just how long it’s going to take for Oliver to get back.  I won’t spoil it here with specifics but I will say, it’s not a trivial amount of episodes.  While it would have been cool to see Oliver dipped in the Lazarus Pit, deep down inside if you’re watching Arrow you had to know the likelihood of that was slim.  Despite being tied to The Flash, Arrow seems to be sticking to the more traditional realism route.  But that doesn’t mean we won’t see that pit in some form.  Like I said, Oliver definitely isn’t in any shape to get back into costume so maybe we’ll see a form of the Pit to help him get back to full strength.  All I’m saying is, the writers of this show know what they’re doing.  Looks aren’t always as they seem.  Remember, Malcolm Merlyn came back from the dead as well so I think there's going to be a lot more to Oliver getting back to 100% and I expect Merlyn to be involved.

I’ve seen people say the flashbacks this season aren’t as good as last season and I agree with that.  But that doesn’t mean they’re bad.  We’re seeing more of how Oliver worked with Amanda Waller and how he pretty much honed some of his skills.  Seeing that it’s Tatsu that Maseo took Oliver too to help bring him back to life, I’m assuming their rescue plan in the flashback fails.  Since it didn’t seem like Akio was there, it’s looking like maybe he dies when Oliver & Maseo try to rescue them.  Maybe Tatsu is the one that helps heal Ra's.

This as a very good episode coming back from the break.  I’m glad they didn’t try to string us along with what we already know.  I still think the door is open for some kind of Lazarus Pit but even if we don’t get it, we’re probably going to see some significant development for secondary characters as Diggle, Roy, Laurel and others step up to try to fill Oliver’s shoes while he’s gone.  It's going to be fun to watch.