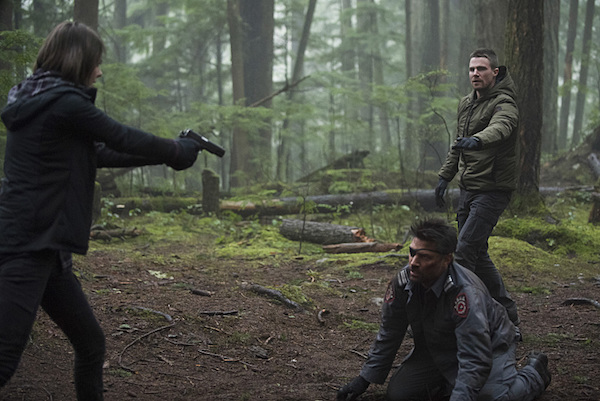 The Return wasn’t the episode of Arrow that I thought it would be but that’s not necessarily a bad thing. I was expecting this episode to be more of Thea and Oliver training and surviving the dangers of Lian Yu (and a free Slade Wilson) but we ended up getting way more flashbacks of Oliver back in Starling working for Amanda Waller. While I think there was some unnecessary flashback scenes, I did find them to be very interesting. 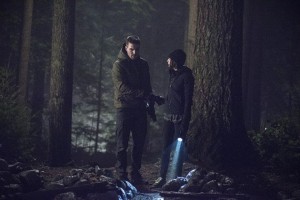 This episode did a nice subtle job of addressing some things that people have asked about but the writes have been mum on. First, they address Thea’s increased skills in only 6 months. Even Oliver was impressed but like Thea said, she had a good teacher. As evil as Malcolm Merlyn is, he’s good at what he does. This also outlines the big difference between Merlyn and Oliver: Malcolm Merlyn is willing to do whatever it takes to survive and win. We also got an answer to how Deathstroke and Captain Boomerang were getting fed while in this island prison. Apparently ARGUS keeps a couple of guards on “island duty”. Just adds to how ruthless Malcolm Merlyn is. He not only let Slade out to terrorize Oliver and Thea but he killed a guard to do it.

Manu Bennett said a week or so ago that this would be the last time we see Slade “like this”. Some thought this might mean that he dies. Clearly that didn’t happen but I think I know what he meant by that. It doesn’t seem like much but the last thing Slade says to Oliver is that Oliver has lost everyone. In his mind, Slade has won. While he didn’t necessarily take away everyone that Oliver has loved, he now sees that Oliver has already lost everyone. He noticed the “darkness” in Thea and he noticed the look on Oliver’s face when he brought up Felicity. So going forward, Slade might not be looking for revenge against Oliver. It would be nice to see Slade Wilson as just a mercenary for hire going forward. Maybe even through him on the Suicide Squad. 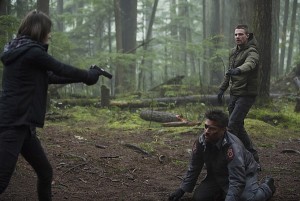 There’s a fatherhood theme in The Return. I forgot that Oliver said he learned stuff about his father and it wasn’t on the island. I like that the video Oliver found was his father telling him he wasn’t the man Oliver thought he was and that he wanted Oliver to right his wrongs. Oliver finding out that the man working with Chyna White was not only someone who worked at Queen Consolidated but had been in the Queen home really drove home the point that his father made deals with shady people. What makes this so good is that this answers a question that I think we all forgot we never got an answer to: Why did Oliver decide to become a vigilante? Sure he had the names but we’ve only seen him concerned with getting home. Now we see the beginnings of him realizing that his privileged life has kept him blind from the evils his own father was working with. Then we have Thea completing her turn from Malcolm Merlyn. Again, Merlyn’s difference from Oliver is that Merlyn is willing to do anything and sacrifice anything to survive. In this case, he sacrificed his own daughter but unbelievably thought she would be okay with it. Sure Thea is young and can be reckless, but she’s still more of a Queen than a Merlyn. This is why she was so understanding of Oliver lying to her. She understands that Oliver lying to her was his way of protecting her and while she wishes he had been more open with her, she can understand that type of love. Malcolm Merlyn on the other hand, uses some convoluted logic to claim he does all this to protect her but he does so by putting her in harm’s way and almost killing those she loves. This is because everything Malcolm Merlyn does is selfish. Even when he left Tommy to go join the League of Assassins, he claimed it was in order to learn to protect Tommy and the ones he loves but in reality it was only to satisfy his own selfish desires. 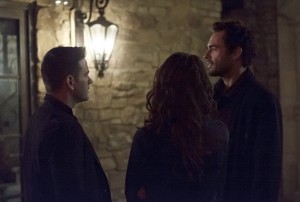 The final fatherhood theme came between Captain Lance and Laurel. I’m actually beating myself up for not seeing this reaction coming. I should have known that Quentin Lance would be more upset at Laurel lying to him. The flashbacks reminded me about how much they’ve been through. For a long time during those 5 years it was just Laurel and then Detective Lance. Laurel saw him at his worse and helped pull him through that and later on when she hit rock bottom, he did the same for her. There was a very strong father-daughter bond between the two and Laurel broke that trust. This is actually a recurring theme on Arrow. Secrets have consequences but it’s always hard predicting how someone will react once they find out. I thought Laurel had a good reason for not telling her father that Sara was dead. Captain Lance is a former alcoholic with a heart problem and a stressful job. Sara dying suddenly couldn’t have been a trigger and for Laurel, she didn’t want to risk losing her father too. However, I really do understand why Capt. Lance isn’t so forgiving.

A few other small things in this episode:

One of the negatives of this episode is that I think they spent too much time rehashing some things we already knew. Don’t get me wrong, I understand why they did that. They showed us Thea buying drugs and being a wild child to drive home how helpless Oliver felt and why he fought to protect her so much. They showed us Laurel & Det. Lance to really drive home their present day scenes. And it was good to see Tommy Merlyn again. But I think I could have taken a little less of those scenes to get more of Oliver/Thea vs Slade on the island.

This was a solid episode. I feel like this season is more of a setup season and that’s affecting it slightly. I still love the show but I feel like this season is really more about world building than trying to get a resolution for just one thing. Sure there’s the League of Assassin’s & Ra’s Al Ghul but right now that threat doesn’t seem as big as Slade and his soldiers from last season. It does make me interested to see what they’re planning because I have a feeling it’s something big.