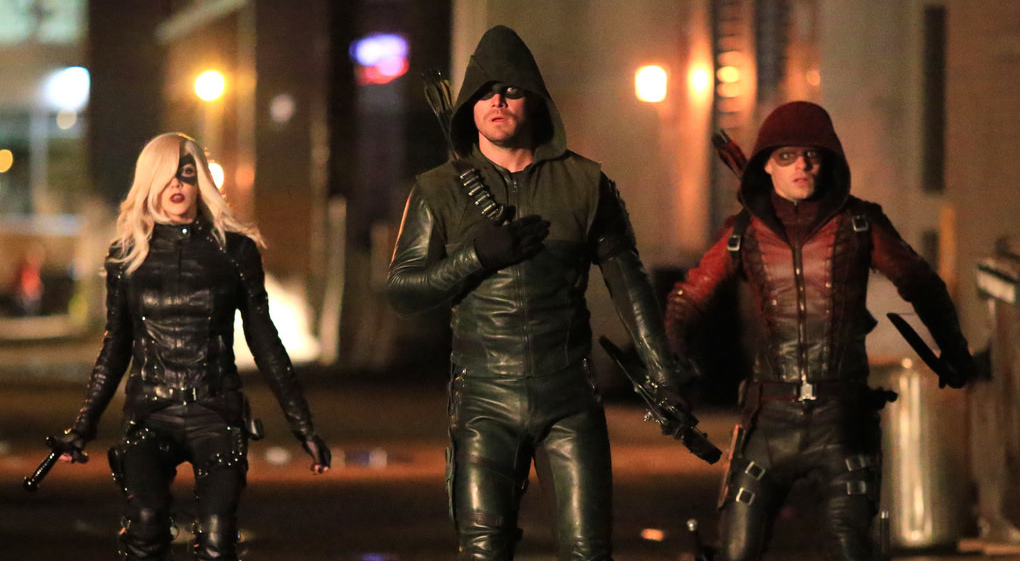 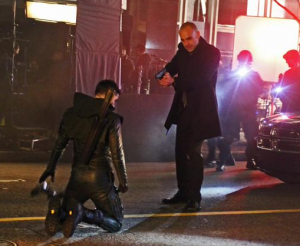 Arrow is really starting to bring it together. The work they put in earlier in the season developing characters and themes are now starting to pay off with what’s going on now. This season has been about developing the team around Oliver. Team Arrow has stepped up big time and nothing says that like Roy saving Oliver by putting on the green hood and turning himself in. There was a little foreshadowing with that when Roy told Thea he was excited when the cops where coming at him earlier because he wanted to be arrested. Roy’s been carrying the burden of that cop’s death on him since that memory came back. This is Roy’s way of atoning for his past. It still shocked me a bit because I was actually expecting Malcolm Merlyn to step up and put the hood on. I’m still not certain Merlyn won’t be the solution to this whole thing. Everyone thinks Malcolm Merlyn is still dead. If he reveals himself as an Arrow imposter it would make sense to the city. 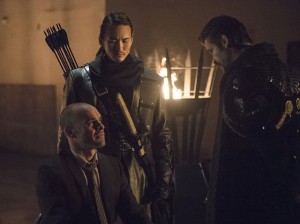 Ra’s Al Ghul is becoming more and more of a problem. He literally dry snitched on Oliver to Captain Lance. When we first got introduced to Ra’s he was a bit underwhelming but now I’m seeing that was almost by design. Its as if the writers wanted us to ignore the huge threat that Ra’s is and underestimate him just like Oliver did. At this point, I don’t see any other choice for Oliver but to take Ra’s offer. He can’t stop the League. The League of Assassin’s is operating under Hydra rules. Take one of them out and two more appear. It’s a numbers game that Oliver can’t win. And no Ra’s has lived up to his promise and turned the city completely against the Arrow. Ra’s is good at appealing to people’s needs and desires. He played to not only Captain Lance’s pain of losing Sara but also his deep seeded distrust and dislike of Oliver Queen. Over the last 3 seasons the one thing that has been pretty steady is Captain Lance’s feelings towards Oliver Queen. Now that he knows he’s the Arrow, Lance is pretty much getting confirmation that death and bad things follow Oliver Queen. It’s going to take something big to bring him back around. 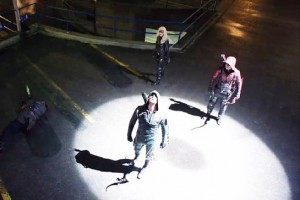 I loved the intensity of this episode. The stakes were raised because Oliver and his team aren’t trying to kill anyone innocent but Captain Lance gave orders to shoot on sight. Of course that changed when he saw Laurel was out there on that rooftop with Oliver and Roy. By the way, Arrow, Arsenal and Canary jumping off the roof together was a dope action shot. Especially with the fact that Oliver had to catch Laurel since she didn’t have anyway of controlling her fall. There was no hesitation in that. It was nice seeing them work together as a unit without any real hiccups. Looks like Nyssa’s training of Laurel is paying off. She held her own against some of the League of Assassins.

I really enjoyed this episode. The disjointed feeling of the earlier episodes is now making more sense to me. It was all setup and development to pay off for the end of the season. Even the flashback this week made more sense. May (Shado’s twin sister) telling Oliver that the truth can be powerful has such a deeper meaning after the events of this season. A lot of the heartache and trouble Oliver is dealing with comes from him lying. Even though those lies were meant to protect in the end they’ve been doing more damage. A few thoughts to close out this review:

All together I think this was a pretty great episode. The Felicity and Ray stuff was still a little out of place but it wasn’t enough to cause a major issue (It’s okay Ray we’ve all been there with the unreturned “I Love You”).