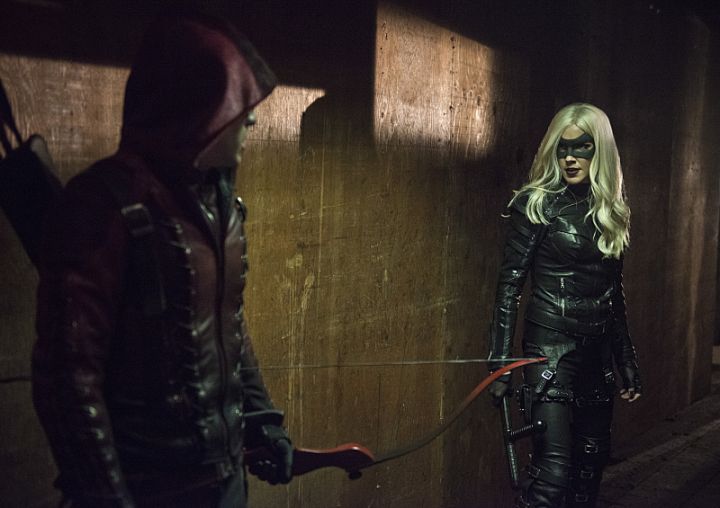 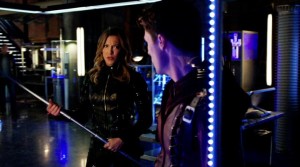 I will just come right out with it: This was my favorite episode of the season so far.  I spent most of the episode trying to figure out why exactly I was enjoying it so much.  Oliver is laid up out of Starling City and Roy/Diggle/Laurel/Felicity are all struggling to rescue the Alderman from Brick.  This episode could have been really annoying. But instead I think watching the team struggle without Oliver was great TV. For almost 3 1/2 seasons we’ve watched Oliver try to limit how involved those who help him are in his fight to clean up Starling City. It took him until almost the end of Season 2 to start using Roy as a partner. This season he tried to sideline Diggle. Oliver trying to shoulder the load of danger and responsibility inadvertently hurt the others because they’re really not prepared to handle his absence. So it was good to see them fail at first, then rally together.  They needed to move past trying to be like Oliver and believe in themselves. I think one of the biggest advantages they have over Oliver is that when Oliver fails, he tries to shoulder all the blame on himself. Roy/Diggle/Laurel/Felicity came to each other’s support instead. 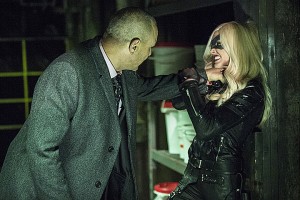 I’m really enjoying Laurel’s transformation into Black Canary mainly because she’s not Sara and they’re not trying to make her Sara.  Laurel is green and clearly not as skilled as Sara.  I chuckled when she jumped on top of the truck and fell. Some folks might complain about this and beg for “Sara to come back” but I really enjoy this Laurel arc. Sure, Caity Lotz’s Canary was physically more skilled at fighting but I think Katie Cassidy’s Canary so far has a much better personality and development.  Laurel’s just become a different character and it’s all because of her transformation after hitting rock bottom last season. She’s no longer going around and feeling sorry for herself. Instead she’s taking charge. I loved when she got one of Brick’s men to roll on him by acting like she was going to change him for the murder of a gang leader then have him transferred to a prison filled with that gang. Laurel’s not taking shit from anyone now.Two scenes that stood out to me in this episode were: 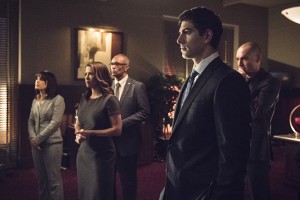 Brick is turning into a legit threat. I think even with Oliver he would be a handful to deal with. Now that he got the mayor to pull the police out of The Glades, he pretty much has complete control of that section of the city. This guy is so bold he ran into the Mayor’s meeting and kidnapped 3 elected officials like it was nothing. While I definitely enjoyed seeing Laurel stab one of the henchmen with the heel of her shoe, I also liked seeing Ray step up. He’s been talking about doing all this stuff to save the city and he’s been coming off as not really trying to get his hands dirty. We knew it wouldn’t take long for Felicity to change her mind and not only go back to helping Diggle & Roy but also Ray.

I’m finding it amusing to see Malcolm Merlyn fall into the same trap with Thea as Oliver did.  Roy tried to warn Merlyn that Thea will find out the truth and when she does, Merlyn will lose her . Of course Malcolm was not trying to hear that. But it’s true. Once Thea finds out the truth, the whole truth, she will be mad at Oliver but she’ll be even more mad at Malcolm and he will lose the only family he has left.  Thea’s gone through a lot of changes herself but one thing she’s been consistent about is that she doesn’t like being kept in the dark and eventually she finds out. Malcolm cause his current predicament because he taught her to fear nothing and no one and yet that was a lie. Malcolm does fear Ra’s Al Ghul.  Moria knew that when she threatened to reach out to Ra’s back at the beginning of Season 2 when he reappeared and tried to blackmail her.

I really want to know what happened to Akio. It’s clear that he died and Maseo blames himself for it. I would have put money on Tatsu blaming him as well but it appears she doesn’t.  Maseo is “pulling an Oliver” and shouldering all this blame and guilt on himself. He’s clearly torn but I think the guilt of whatever happened is still eating him up. He’s not going to be able to keep up his loyalty to both Ra’s and Oliver. 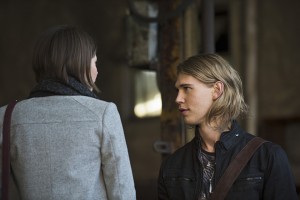 This was a really great episode.  As I said at the beginning of this review, it’s my favorite of the season so far.  I can’t wait to see where they go from here.  The promos show us Oliver eventually returning but there’s no way he’s going to be in any condition to really help.  I know Oliver will NOT be happy with Laurel as Canary but he’s going to have to accept that things changed when he was gone.  This season started off slow (like almost all seasons of Arrow) but has really picked up.  The crazy part?  We’re only halfway through the season. Oh and before I end this: I never trusted that damn DJ.