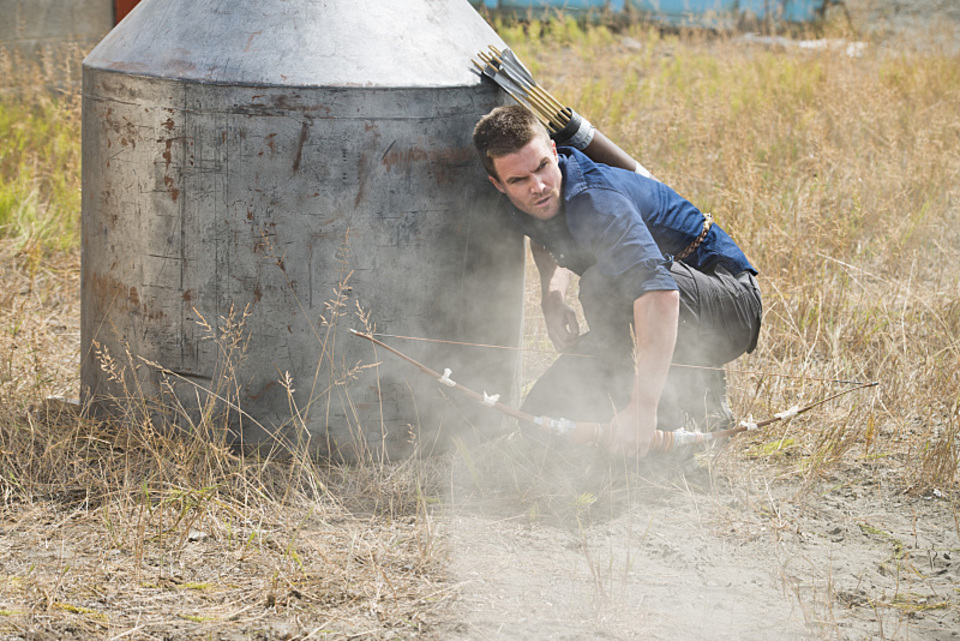 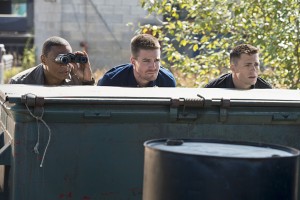 Look, now might be the time for you to check out of Arrow if you’re not interested in seeing major changes to the characters of Laurel Lance to or Thea Queen/Merlyn.  Laurel is going to become the new Black Canary and Thea…well, I’m not sure what Thea is going to become but it’s going to be deadly.  These things are happening. So it might be better for you to check out now than repeatedly say how much you don’t want them to.  I’m just giving you fair warning now.

I liked this episode because its really about some of the major changes we’re going to be seeing going forward.  Where last episode felt a little bit like a rehash of the previous season, this episode reassured me that this isn’t what is happening.  The biggest changes so far are for the ladies on this show.  Felicity has a corner office now.  I like the change because let’s be honest, Felicity is too good and too smart to be sitting down in a tech room somewhere.  She’s also too smart to be fetching someone coffee.  He might be a creeper but Ray Palmer immediately recognizes her worth and made her an executive and gave her a corner office.  With her own assistant.  It’s a much needed upgrade for Felicity.  It’s going to be interesting seeing how she juggles this new job and also helping Oliver.  I also have to point out again how much I love Brandon Routh as Ray Palmer.  He’s hyperactive and seems like such a good guy, although, the way he was looking at those weapon plans gave me a little pause.  What is Ray up to? 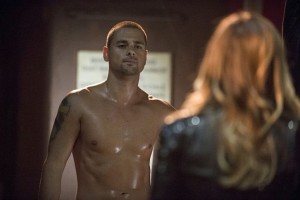 I’ve always been a defender of Laurel Lance.  I thought she had a pretty good arc in Season 2 and that she’s come a long way from the character she was on Season 1 (that I didn’t really care too much about).  I’m glad that they didn’t go with her falling back into taking pills and alcoholism after her sister’s death.  She’s actually got a lot of pressure on her now, more than she did in Season 2.  Her sister died, her dad has a heart condition and she can’t tell him about Sara’s death….she’s angry.  And she wants to work that anger out by kicking people’s asses.  Now…she’s not that good right now, so of course she got her ass kicked.  But her dad and Oliver once again telling her that she’s not Sara and Oliver refusing to train her sent her back to Ted Grant.  I don’t know if Ted Grant will ever suit up as Wildcat but in the comics the character has a history of training/mentoring young heroes.  I’m looking forward to seeing how this plays out because it finally gives Laurel some purpose and she can now “fulfill her destiny” and become Black Canary.  This also means we can get a good look into seeing her training and becoming a hero. 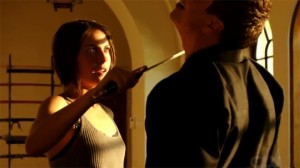 Speaking of giving purpose, I’m also a fan of what they’re doing with Thea.  Thea was another character that last season had some significant growth but was overall underdeveloped.  The changes in Thea from Season 1 to Season 2 were pretty big. She matured as a character a lot but she also was still reduced to being the kept-in-the-dark whiny sister.   So I like the idea of having her train under Malcolm Merlyn.  I’ve seen some people say they don’t like it but I just don’t know what they’re looking for.  I’d much rather see this than Thea stay in the dark and being just another weight holding Oliver down.  It also showed some growth in Oliver (something I talked about last episode).  He decided to be open and honest with Thea.  He told her he couldn't tell her everything (Diggle was right about that) but he told her about what happened to their father (Robert) and how he sacrificed his life for Oliver's.  His line about both their parents sacrificing their lives so they could live was good.  I enjoyed this conversation between Oliver and Thea because it shows how far Oliver has come and that despite what happened to Sara, he's not just going to close himself off to everyone.  Not only that, but this also gives us more John Barrowman and how can you be against that?  Barrowman seems to be treating Thea like the son he wanted Tommy to be. That scene where he apologized to her and said it was her fault she wasn’t making progress was so good.  In 6 months he turned Thea into a weapon.  What I’m interested in is what is his end game?  I’m wondering if Malcolm is the one that killed Sara.  Oliver still doesn’t know that Malcolm Merlyn is alive (or that that’s who Thea was living with).  Barrowman just makes this show even better because he has such a presence.  I’ve seen the promos for next week’s episode so I know he’s coming to Starling and I can’t wait.   Also Nyssa showing up at the end of the episode asking about Sara now makes me question who really killed Sara.  If it wasn’t the League of Assassins was it Merlyn?  Think about it, he’s associated with the League and they weren’t aware that he was still alive.  He could be on the outs with them and he would know that Sara was a favored “daughter” of Ra’s.  Killing her could be a way of killing two birds with one stone:  Piss off Ra’s and get back at Oliver.  Something to think about. 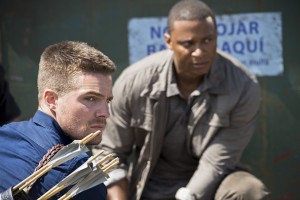 The little side mission with Shaw and the encrypted ARGUS files was interesting because of the possibilities.  Shaw made it seem like Amanda Waller is up to something and that’s why he decided to betray them.  Obviously Diggle wasn’t having that because that puts his family at risk but I’m wondering if when we’re going got see Waller again and what evil stuff she’s up to.  We didn’t get any flashbacks this episode but it’s clear that there’s a lot of history between Waller and Oliver and Waller isn’t technically a good person.  Oh and the “Oliver is the shit” moment of this week is Oliver making two bows out of the materials in their hotel rooms.  Probably not going to get a security deposit back off of that.

If there is one issue I have with this episode it’s more about the overall season. End of last season a point was made that Oliver lost his company and his money.  Remember, they moved out of the Queen household.  Even Verdant was lost.  So this season we see the team with more gear and the hideout at the bottom of Verdant rebuilt.  Now I’m sure Oliver still had some money squirreled away but it would be nice to see how he’s earning money now.  This isn't like The Dark Knight Rises.  I wasn't bothered by this similar thing in that movie because they actually had enough hints that Bruce didn't have as much money as he used to and it did affect what he did.  Right now, Oliver is pretty much operating like normal (well, they did fly back from Corto Maltese in coach).  Sure, Felicity has to work another job in order to get paid so there’s that aspect of this.  But at this point, we don’t even know where Oliver is living right now.  I was kinda expecting them to move into the backup hideout that was revealed last season.  Honeslty all I need is a throwaway line about how they raided some Queen Consolidated storage unit or that they're taking money/equipment from criminals they're capturing.  Truth is, I would like to see Oliver finding some way of getting back into Queen Consolidated and having to manage being the Arrow and Oliver Queen the businessman.  I’m certain we’ll eventually get that though.

Oh and I love how they handle this show and The Flash sharing a universe. Felicity asked Ray for a few days off to go visit a friend who was “struck by lightning” so she’ll be on The Flash next week.  That also means she probably won’t be around on Arrow next week so that helps solve some of the “crowding” issues of last season.  Pretty slick.

I made a life shattering prediction for Agents of SHIELD on this week's review, so let me make one for Arrow: What if Roy dies/goes away and Thea ends up becoming Oliver's new side kick?  Remember, her nickname is Speedy.  Just a thought