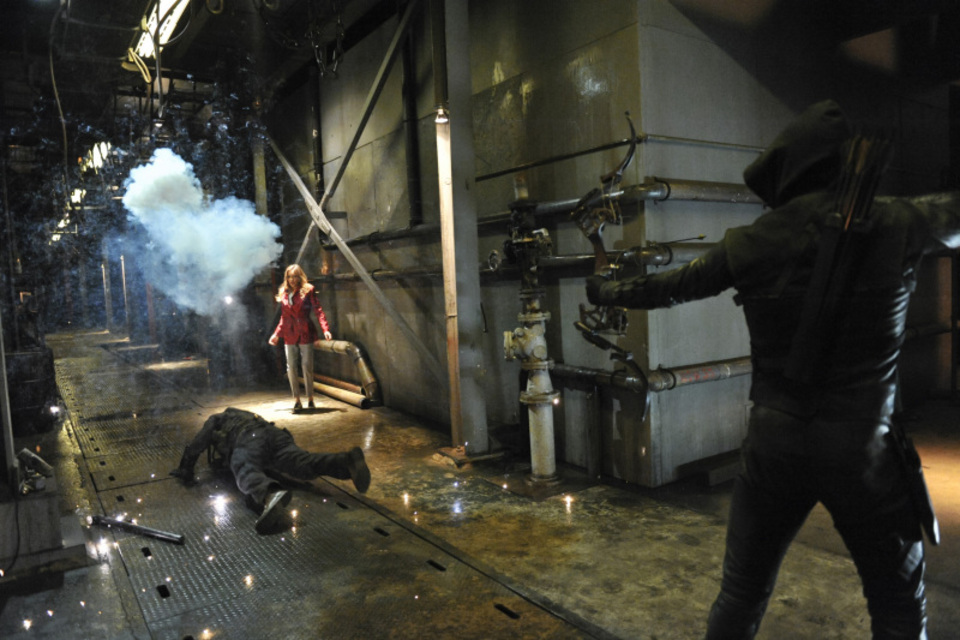 Slade Wilson has fucked up Oliver’s life so much that he doesn’t even make an appearance this episode and yet his presence is felt so heavily.  The crazy thing about this episode is that there really isn't a lot of action.  But it's filled with so much emotion and tension that it's not only compelling TV but really makes you wonder how this season is going to end (chances are,  likes season 1, it won't be a happy ending).  After the events of last episode it's no surprise that Oliver is finally broken.  Hell, I’m still a little broken myself.  When he didn't show up to the funeral or the reception and Diggle & Felicity had no idea where he had gone, I thought Oliver reverted back to his old habits of running from his problems. But when they find him and he's dressed for his mom's funeral and he tells them he just couldn't bring himself to leave, I realized just how broken he was.    And it was shocking to see.  We've seen him emotional and irrational before but never broken.  Oliver is always the strong one.  But at that point Slade had defeated him.  Slade Wilson made Oliver a promise and he's kept it.  He took everything Oliver loved and broke him and it was rough to watch.  Oliver was literally to the point of giving up and just turning himself over to Slade so that he could be killed and it would all be over.

And who is the one that brings Oliver back from the brink of defeat?  Laurel Lance.  I feel like I should do a victory lap.  I've been telling folks that I think they were working on something

big for Laurel and it's really coming to fruition.  Just like Oliver was there to support her earlier in the season, now she's here to give him the support and motivation he needs.   Laurel is a fighter.  She always has been and now that she's worked her way back up from the bottom to now being the strong survivor she is.  This is the character I caught glimpses of in Season One when everyone was saying she was terrible.  And now that the writers have put her through emotional hell, Laurel has emerged with not only a sense of purpose but clarity.  I don’t think her transformation is done and I liked the fact that she didn’t want to just sit back and watch everyone else risk their life to save the city.  There was so much emotion when she talked to Oliver about being there when Tommy died and why he didn’t tell her.  I really hope she doesn’t die because there’s still so much potential for this character to grow into a huge ally for Oliver.  I mean hell, she's already blackmailed her way back into her job and now she's illegally bugging the office of the Mayor.  How can you not love Laurel?

I love that Isabel just popped up at the reception.  How disrespectful is that? Diggle & Felicity thought she was dead and she shows up at Moira’s funeral reception to give them an ominous warning.   And then to rub salt into the wound, she shows up and tells Thea that Verdant is property of Queen Consolidated.   I really thought for a minute there that the only member of the Queen family that would have any kind of business would be Thea with the club but that's gone too.  Of course that means so is Oliver's base of operations at the

Foundry.   But it seems as though Oliver had a plan for that with his backup location (that we aren't sure where it is).  The only real down side is that Isabel's Ravager outfit might take some getting used to.  They were trying to go with a mashup of both the comic book version and keeping it similar to Slade's current costume on the show.  It’s not bad but it does look weird on her.  Summer Glau is in that Manu Bennett category with me now.  While her character Isabel hasn’t been as big of a presence as Bennett’s Slade Wilson, I still don’t want to see her go.  I hope there’s some way for them to keep both of these characters around because I think they’re not played by a good actor/actress but they offer a constant menacing presence.  Villainy aside, Isabel is still the CEO of Queen Consolidated and the stock for the company is on the rise because of it. I think that could really play into Season 3.

Even with the depressing tone of this episode, it was nice to get a laugh from Felicity basically having an orgasm at all the tech at ARGUS.  Her nerdiness and awkwardness is always a welcomed relief on this show.  I have a feeling ARGUS and Waller are going to play a bigger role soon.  Maybe not in these last 2 episodes but I believe they'll be a force early on in Season 3. How does Waller & ARGUS know about this secondary hideout of Oliver?  Waller seemed to not only know about this second hideout but that Oliver goes there frequently.  Is ARGUS keeping tabs on Oliver?  I just have a feeling they're up to something no good over there.

One thing that struck me was that during the conversation Oliver had with Blood at the restaurant, Oliver told Blood that Slade was only motivated by revenge and that he would go back on

his promise.  Thing is...I’m not so sure.  I have no doubt that Slade coming after Oliver is personal, but I believe Slade  has a larger plan in play for a reason we aren't so sure of.  Slade helping Blood become Mayor and supplying him with an army to wreak havoc on the city seems like overkill.  I know that seems silly to say about a guy who just ran a sword through Oliver's mom the episode before but think about it.  Everything Slade has done has been pretty calculated and specific to breaking down Oliver.  And even after he killed Moira he said "only one death left."  I mean he could mean metaphorically the death of the city but that seems to abstract for Slade.  And having Blood become mayor doesn't seem necessary unless there's a bigger plan in play.  I honestly think Slade has bigger plans than just destroying and killing Oliver.  I also believe there’s someone else involved in running the shots.  Where did he get all his money from?  How did he meet Isabel?  Did she fund him and if so where did she get her money from?  There' s something larger going on here and I think it's going to leave us with a "Holy Shit" moment during the Season Finale.

The only negative thing I have to say is that it really feels like they've being obvious with Roy.  It seems pretty obvious that he'll get the cure right when the venom wears off.  Now of course, the writers of this show always have a trick up their sleeve so I really there’s a good chance it won’t be that obvious or go that smoothly and I'm hoping so.  If there’s one thing I could ask for more next season is that they actually bring Roy more into the team and have him being used more.  There’s been so much going on and the writers have actually done a pretty good job juggling a lot of different characters and plots but it seems like Roy always gets the short end of the stick.  Even this episode they just show up knocked out on the table from snake venom.  I’m hoping they do something bigger with him.

For an episode with very little action in it, there's still so much here.  There's an overwhelming about of sadness and tension in this episode. And everything just keeps piling on.  When you see Slade/Blood's army spreading out through the city you realize just how big of a task Oliver has in front of him.  Slade & Isabel are always one step ahead of Oliver.  Oliver’s plan to crush Blood’s army was a good one but again, being one step ahead, Slade had a plan.  Not only were some of his men infiltrating the police department and transportation system but he also had Isabel there to take out Diggle (I’d love to see how Diggle escapes Isabel next week).   Just seem like there’s not a lot of hope left.  And I love it.  This is why I always say Arrow is the best show on TV folks aren’t watching.