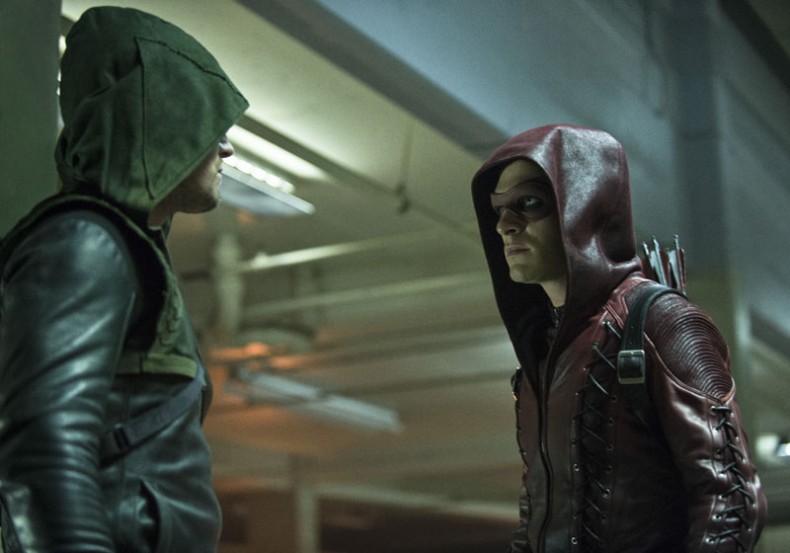 After watching the Season 3 premiere of Arrow I’ve realized that I haven’t properly prepared myself for how this show kicks you in the chest week after week.  I thought I was prepared this time.  I really did.  I’m no rookie to this show. But no…I was wrong. 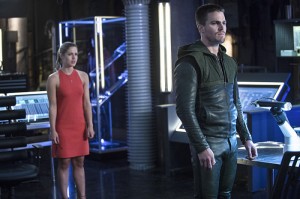 This episode is aptly named “The Calm” and it fits so perfectly.  I knew Oliver and his crew were too happy. Crime is down.  Detective Lance is now Captain Lance and he has officially disbanded the Vigilante Task Force and The Arrow is now a officially a hero of the city.  Lyla is very pregnant and Diggle is close to officially being Daddy Diggle.  Roy has a costume and has certainly been working on his archery and parkour skills.  Oliver is about to make a pitch to get his company back.  He’s even asked Felicity out on a date so that maybe, just maybe he can have a normal life as Oliver Queen.  And then the new Count Vertigo cockblocks him with a rocket launcher. At first I wasn’t sure how to feel about this episode because something just felt off.  It was too nice and neat and everything was going right and I’m just not used to that for this show.  But like always, this was just the writers of this show playing with our emotions and getting us to drop our guard just like Oliver did. 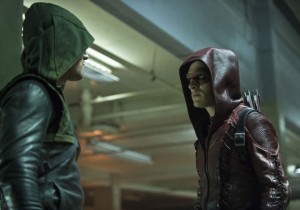 This episode was a reminder that Oliver can’t just be Oliver Queen, even when things seem quiet.  He has to always keep his guard up.  But unlike before when Oliver was trying to do everything by himself, I think he also showed his maturity as a hero in this episode.  When he grounded Diggle, it did at the time seem like “Old Oliver” but in reality, he was making the right decision.  Diggle is about to be a father and start a new life and Oliver has Roy working in the field now.  So Oliver was making the smarter tactical decision.  Roy has officially been upgraded to partner and its something we’ve all been waiting for since he was introduced on the show.  This is why I’m not too sad by them setting up for Diggle to have a smaller role this season.  I like Diggle and he’s been by Oliver’s side since the beginning.  But I also recognize that Roy is really supposed to be Oliver’s partner so I’m okay with Diggle taking a smaller role.  Plus, Roy has a costume and a bow, I want to see more of that (even the unnecessary flips). 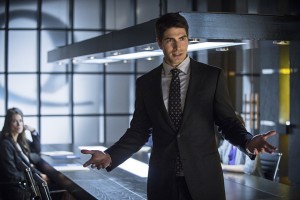 Vertigo is becoming a staple villain on Arrow.  I also like how they brought in Peter Stormare for the role and how they explained him as the new Count Vertigo.  Hell, they even set up the possibility for there to be someone else who takes on the name later on.  But I hope Stormare keeps the role for a while and we see him again.  I know there’s going to be some way bigger threats for Oliver this season but having a guy like Stormare around to play a street level villain is a great addition.  Speaking of great additions, Brandon Routh is going to be a joy to watch as Ray Palmer this season.  I actually like Routh as an actor and I think he’s just been unfortunate in starring in some bad movies.  But he really shined in this episode.  He’s charismatic as hell as Ray Palmer and it’ll be interesting see what his vision is for Starling City and Queen Consolidated are.  Also his chemistry with Amell and Rickards is pretty great.  There's also a little bit of a theme that is hinted at with Oliver's scenes with Vertigo and Palmer and that is that Oliver's greatest fear is himself.  He even mentions it at one point.  I think we'll see more of this as the season goes on.  Oliver will be battling between being Oliver Queen or being the Hero his city needs.  Yeah, I know...sounds like a Bruce Wayne/Batman thing but we all know that this show is basically DC's way of doing a Batman TV show without getting the flack.  And I'm definitely okay with that. 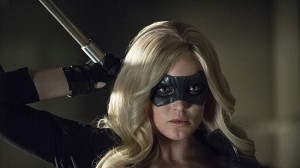 And to top it all off, they end the episode with the death of Sara Lance.  I know folks are going to feel some kind of way about this but I knew it was coming.  It was actually long overdue to be honest.  I was actually shocked Sara made it out Season 2.  You’ll recall that I spent a lot of time predicting Sara (or Laurel’s) death in Season 2.  I knew one of them would eventually have to go.  I was surprised both made it out of Season 2 but now it’s obvious the Arrow writers did this just to toy with our emotions even more.  Don’t kill Sara when we expect it to happen and then kill her off when we least expect it.  I tell you, no show on TV knows how to end an episode like Arrow.  None.  The question now is who killed her.  Was it Ra’s Al Ghul himself or just one of his assassins?  We know this is going to have a huge impact on the show going forward.  I spent most of last season defending the character of Laurel Lance and I watched as this show had her reach rock bottom just to build her back up.  The Laurel of Season One could never be Black Canary, but this Laurel Lance?  I absolutely see her stepping into that role at some point in this season.  Unfortunately CW (and Stephen Amell) can’t seem to help themselves with tweeting out teaser pictures so I already have an idea of how Laurel will get her training but I’m here for it.

Like I said at the beginning of this review, the title of this episode is very appropriate.  Arrow has always been the show that starts off with everyone thinking they know how things are going to go and then descends into chaos.  I believe in just one episode, they’ve solved the one issue I had last season with things getting a little too crowded.  With Diggle having a kid, I expect to see his role diminish (but thanks to Roy as Arsenal it won’t be a detriment to the show).  And now with Sara dead, we have one less character but also have a path for Laurel to achieve her destiny.  As with always, Arrow isn’t a disappointment and has laid the groundwork for a fantastic season.

* Oh and I should add in a note that I love that they actually added in a scene to show us how Barry was able to find Oliver and matches up the timelines with The Flash.  It's always the small things with this show.  They think of everything

*Second Note:  I forgot to mention:  Flashbacks.  Yeah...Amanda Waller is a bitch.  That pretty much sums those up.