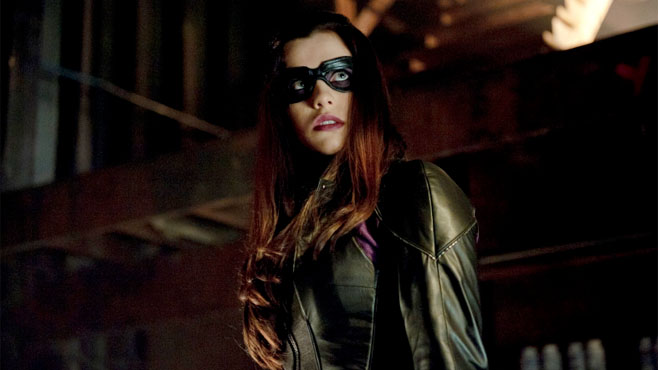 You know show writing is good when it can make you really enjoy a character you didn’t like from a season before.   In Season One, I didn’t like the Huntress.  Well, let me rephrase that.  It’s not that I didn’t like the character or even the actress playing her (Jessica De Gouw).  I just felt that in Season One they kinda dropped the ball with the episodes with her.  Mainly because they didn’t really address the fact that Oliver was such an incredible hypocrite with his stance with the Huntress.  As he was running around the city killing bad people according to his father’s book, he was then trying to take the moral high road with Helena and tell her that she couldn’t do the same.  But, as with everything with this show, the show writers know what they’re doing and everything is by design.  Oliver’s hypocrisy in this episode is great.  One of the greatest thing about this character is how he struggles with maintaining appearances and what his moral codes are.  And even better, the great inconsistency in his code.  Helena's crusade against her father is really no different than what Oliver has done.  Even Sara brought up this point when Oliver told her she was too close to the situation and she couldn't kill Helena.  Sara asked Oliver what the difference was between her trying to protect Laurel by any means necessary and what Oliver is willing to do to stop Slade Wilson from hurting his family.  I liked that Sara called Oliver out on this and I also like that it seems that Oliver is starting to see it himself.  He's still going to be hypocritical (see what he does with Roy) but the character is definitely growing from Season 1 and he's having to deal with the mess he tries to live by this inconsistent moral code he has.

What is it with Oliver's ex's always going at it?  Remember Detective McKenna Hall?  Yeah I think the last time we saw The Huntress, she shot Hall with a shotgun.  This season we have Sara as Black Canary going toe-to-toe with The Huntress and it's pretty good.  Huntress throws Canary out of a window and Canary ends up choking The Huntress out and almost snapping her neck.    The fight scenes on this show are just so enjoyable and good.  They're so good you forget that they make you forget how good the action on other shows can be (Agents of SHIELD has actually been pretty good with the action but Arrow is another level).

I feel like my constant defense of Laurel is going to pay off.  I enjoyed her a lot in this episode.  She went from being helpless to standing up for herself.  This is the Laurel that makes me think that Sara is going to be the one that dies and that

Laurel will eventually take over as Canary.  At first, when they had Laurel going back to work for the DA’s office I thought it was pretty sloppy and convenient writing.  As with everything with this show though, that was by design.  D.A. Donner was just using Laurel as bait and when you look back at it, it was pretty obvious.  One of the biggest cases the D.A.’s office has coming up, with huge amount of press and coverage, and they’re going to go to a disgraced former colleague to bring home the win?  Yeah it was too easy and obviously something else was up.  But the fact that Laurel seems to have turned a corner and then used what happened to blackmail her way back into her job?  Not bad.  I like the idea of Laurel taking more control over her life and not being a victim.

I did a Hulk grin when Oliver called Roy ‘Speedy’.  Even better was that Roy’s response later was the same as Thea’s was ("Don't call me Speedy").  I don’t know if they’ll make ‘Speedy’ Roy’s codename (I doubt it) but it was still nice tip of the hat to fans.  I do think it would be cool if Roy’s codename becomes “Speedy” and that’s how he’s able to control his rage.  Like Oliver said, thinking of Thea is the only thing that really helps Roy stay in control.  This goes back to Oliver really not thinking clearly when it involves his family.  Roy’s only real incident was in this episode and it was after he took a bullet through the hand.  Oliver has lost control over less.  Roy had a bullet literally rip through his hand and Oliver didn’t even give him a chance to get under control.  Then he confronts Roy and tells him that the ONE thing that has helped him maintain, he has to give up?  That makes no sense.  Especially with how many people Oliver has put in danger because of what he's doing.  It's ridiculous.  In a way, because he told Roy he had to say away from Thea, Oliver played right into Slade’s hands and left her without anyone to watch over her.  I wonder how Roy is going to handle this when he finds out Thea was kidnapped.  I also wonder if this is when Thea finds out that Oliver has been lying to her as well.

There's still one question I have:

Who helped Slade take out Diggle in ‘The Promise’?

Before this episode I thought it was Helena but that doesn't seem to be the case.  Slade didn't tell Sebastian Blood who The Arrow was so it's unlike that it was Blood or anyone working with him.  I'm putting my money on Isabel Rochev.  A few reasons:

1. You don't cast Summer Glau for a role like this and not use her to her full potential

2. It was either Ivo or Fyers (can't remember which one) who in Season 1 was in contact with a woman (who we never see) that was really in charge of things.  This would make sense especially since Isabel's name was on the original list

3.  This is more of a spoiler but if you saw the promo for the next episode, Oliver looks to be fighting a woman in what looks like the board room of Queen Consolidated.

Things are really starting to get interesting. I think Slade Wilson is even more dangerous now than he was when they were all on the island.  And the most dangerous thing about him is, he's seems to be in complete control.   All in all this was another solid episode.  You can tell that the last 2 episodes have been for laying the groundwork and setting up for the big confrontation between Oliver and Slade but I'm good with that.  I enjoyed this episode with The Huntress way more than I did her episodes in Season One and that's always appreciated.  And just a random thought.  I could really see them doing a Birds of Prey spin off show.  They're only missing Oracle and while I know that in the comics that's Barbra Gordan, there's no real reason why it couldn't be Felicity.  I know hardcore comic book nerds would hate that but, to me, Felicity is serving the same purpose now that Oracle does.  Just something to think about