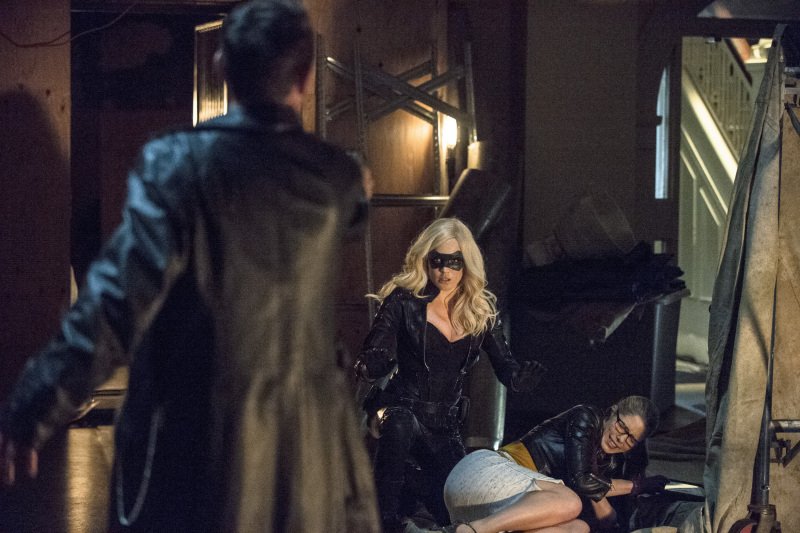 Man I hated the fact that Arrow was on break for the last couple of weeks.  And it coming back this week is just a reminder to me that we're now coming into the last half of this season and I'm going to have an even longer wait.  Especially since this season has been so good.  I really enjoyed Season 1.  I binged watched it on Netflix and it was good.  But it had to develop into a really good show.  People like to rewrite history and act like Arrow started knocking it out of the park right out the gate.  It didn't.  And it had its fair share of dull episodes.  But Season 2 has been infinitely better and this show is definitely firing on all cylinders.

This is another one of those episodes where the main storyline and villain aren't the main attraction.  I don't mind these episodes.  Sure, it's nice to have an episode like Heir to the Demon where Nyssa al Ghul was an awesome main threat and part of the storyline.  But I also like these episodes where the main villain and plot are just used to move forward some side storylines and character development.  Robert Knepper actually does a very good job as William Tockman a.k.a. the Clock King.  I would love to see him back at some point in the future (maybe even next season).  I loved the fact that he was a challenging threat because of his hacking ability and was capable of countering Felicity.  What would be nice to see in future episodes would be some villains teaming up in a way that challenged the whole team.  I think if you take the planning/hacking of Tockman and team it up with a physical threat like, Slade, it could really push Oliver's team.

As for the rest of this episode, I feel like this is going to be remembered as the "Calm before the storm" episode. There's a lot of things I feel are coming around the corner and everyone on this show is near their breaking point (even when they're trying to show they aren't).  We have a Oliver's team looking really crowded right now, the Lance family (not just Laurel) really struggling, Oliver and Moira not talking and then at the very end, Slade Wilson reveals himself to Oliver in the most unexpected way.  Let's go through these one by one.

Crowded Arrow Cave - I mentioned this last week and  it's obvious the writers of this show are aware of it.  To me, it's understandable why Felicity would be feeling a little left out.  Sure, it seemed a little silly that she was jealous that she didn't have any battle scars but when you think about it, it would make you feel kinda worthless if everyone else on the team can hold their own but you're the "weak link".  So while predictable, it made since that they did a "make Felicity feel like she's useful" episode.  Plus, I liked how they did this episode. First off, the scar comparison at the beginning was not only hilarious but classic Felicity. Also, it wasn't until the very end when Oliver stepped in to tell Felicity that she's "his girl".  To me it's typical Oliver to ignore things like this.  I also liked that Sara and Felicity had some moments together and it was Sara who first tells Felicity that she's a necessary member of the team.  I don't think it's an accident that it seems like Oliver is always the last one to notice when a member of his team is unhappy, unsure of their place or just needs some help.  It's one of his character flaws that, while he's still working on, is still a big issue. I also like that this was one of the first times Felicity has been out of the hideout on a mission and she's actually not just a damsel in distress.  Sure it wasn't perfect, but I do like the idea of Felicity being more mobile and not just being helpless.  Overloading Clock King's cellphone after taking a bullet for Sara?  Not bad.  The only real negative I have with this is that Roy was still left out.  He did get at least a cameo this episode so that's an improvement over the last one but he's supposed to be training.  Since he's been injected with the mirakuru and the episodes before showed him losing control, it's a little odd that he's now in control enough that Oliver isn't even keeping his training up.   Again, not a big deal but definitely an obvious side effect of having more characters on this show.

Lance Family - Everyone always talks about what the Queen family goes through but the Lance family has been through some rough stuff.  I like that they aren't sugar coating stuff with this family either.  First off, if Det. Lance and his wife got back together, it would have pissed me off a bit.  It would be too nice, clean and easy for this show.  I also liked that Oliver finally stood his ground and defended himself from Laurel.  Sure, it was pretty silly and awkward for Sara to invite Oliver to the Lance family dinner.  And when Dinah told Det. Lance she wasn't moving back to Starling City and that she was seeing someone, Oliver was sitting at the table like:

Then when it dawned on Laurel that Oliver & Sara were back together, I wasn't expecting Oliver to stand his ground but I'm glad he did.  Not because "Laurel was being a bitch" but because Laurel needed to hear this stuff to finally face her issues.  I've been one of the biggest Laurel defenders.  I get why people don't like the character.  But as I say week after week, she's been through the most out of any character that hasn't been to the island.  And she's been using that as an excuse to really not take responsibilities for her current situation.  I GET why Laurel acts the way she does and I think the character needs to go through all these things.  Laurel has had a huge chip on her shoulder (rightfully so) and tends to snap at every person who has wronged her, even if they've apologized and want her forgiveness and to be there for her.  Even though her relationship with Oliver might be a little bumpy right now, it was nice to see her reconcile with Sara.

Slade's First Move - Not much to say here but, Oliver and Slade looked at each other like:

Arrow really knows how to close out a show man.  The thing that really should make Oliver worried though is that Slade seems to be more in control than he was on the island when he was injected.

All in all a pretty solid episode.  I also liked how they revealed that Sin was the daughter of the pilot who crashed on the island and that's why Sara looks after her.  I still don't believe we'll leave this season with both Lance sisters alive.  If the writers take the easy way out, they'll kill Laurel because fans obviously like her the least.  But I think Sara is the one that's going to bite the bullet.  The character of Laurel has been through too much and has actually been developed too well to be killed off now.  By the end of this episode she's finally trying to get the help she needs and I think she's going to turn a corner.  I'd be very disappointed if they killed her off at this point because it would be lazy. Anyway, now that Slade has revealed that he's still alive to Oliver, the rest of the season is going to be very very interesting. I can't wait. I'm gonna be watching my TV like: