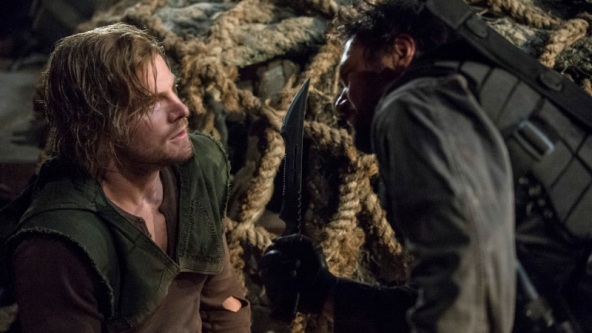 Those words from Slade Wilson sum up this intense ass episode.  I’m just going to say it:  This is my favorite episode of the season so far.  And that says A LOT because I’ve been loving this second season.  End of last episode we see Slade Wilson sitting in the Queen home, talking to Moira and we just knew that the next episode was going to be extremely intense.   Just that forced handshake between Oliver and Slade was enough to know shit was going down.  And it lives up to it.  The craziest thing?  This episode is so intense, yet Slade & Oliver don’t even get into a physical altercation (not counting what happens in the flashbacks to the island).
The Promise is great for several reasons.  First off, it starts almost exactly where the last episode ended in the same intense situation.  Oliver is now faced with the person he fears the most, in his home, with his family….and he had NO idea Slade was even alive.  He’s caught completely off guard and is visibly flustered and confused.  He couldn’t prep for it and you can see the entire time, he’s trying to figure out what to do next.  You  just know this is part of Slade's plan to mentally torture Oliver before confronting him and trying to break him physically (as he said when he was first revealed to be alive).  This is why this show is so good…the little things.  Remember how silly it seemed to have Oliver and his Mother not on good terms anymore?

Well now, because of that, Oliver being tense and rude to Slade comes off to Moira as Oliver having a problem with her, not with Slade. Neither Moira nor Thea pick up on Oliver’s apprehension over Slade because he’s been giving his mother the cold shoulder for a while now and this just seems normal.  And Slade was just laying it on thick.  I think the thing that worried Oliver the most is how in control and calm Slade was.  Here’s a man that was so uncontrollably raged he punched a hole through a man’s chest, yet he’s damn near charming Moira out of her panties and talking about rare, expensive artwork with Thea.  All while Oliver could do nothing more than stand there with his jaw clinched.

This episode is different from most episodes of Arrow in that this might be the most time we’ve been on the Island in one episode.  And they put a lot into it.  What makes this Oliver/Slade confrontation so intense is the fact that they used to be so close.  Slade calls Oliver his brother in the flashbacks.  In Slade’s eyes, he’s completely justified in going after Oliver because he feels so betrayed.  Having the mirakuru in him just adds gasoline to the fire that already burns inside of him.  There were plenty of nice and brutal action scenes.  Slade catching Oliver by the leg when he tried to jump off the boat then throwing him back on with one arm shows just how strong Slade is now.  Also, he was walking through bullets with no care.  Then there were the little things like Oliver putting on the green hood for the first time and Slade putting on his old mask.  Both those moments just got me hyped.  But my favorite things about this episode's island flashbacks were the fact that they gave me some important insight into how the Island changed Oliver.   I’ve been saying that Oliver comes off as hypocritical and a jerk because he’s not fully assimilated back into society. Oliver learned some really tough lessons on the island and when he got back home, he really overcompensated.  Take all the killing he did in Season1. One of the first things we witness is Oliver killing one of his kidnappers and saying “no one can know my secret”.  He didn’t hesitated.  Why?  Because hesitating with Ivo is why Slade found out about how Shado died and the current mess he’s in now.  It's also why Oliver has a hard time letting people in on his secrets and believing that they can accept him for it.  Think about all the times his family and friends have asked him why he doesn't share more.  Hell, even Diggle and Felicity don't know all of what happened to him on the island  They're just now finding out about Slade Wilson.  This episode shows why Oliver has that problem believing he can be honest.  He tried to talk to Slade but it didn't matter.  And so to Oliver, it's just best if people don't know.  It might not always be the right or smarter decision but it's clear that the trauma from the island is what lead him to this.

As what always happens when we see some big changes in the flashbacks, I now have even more questions about the island.  What ends up happening to Sara & the rest of the survivors of the freighter?  We know Slade was thought to be dead, but so was Sara.   And Oliver was found on the island alone.  So now I’m curious about what happened to everyone else.

Back on the current timeline, this episode does a good job of not making “Team Arrow” seem so crowded.  We finally get Roy Harper showing up and while he doesn’t get a lot of screen time, it’s exactly what has been missing the last 2 episodes.  Roy training with a bow & arrow is the kind of short, throw away glimpses of the character I’ve been asking for the last 2 episodes.  Everyone gets at least a cameo and when they all rally to go back Oliver up at the mansion, it’s pretty cool.  Sara telling Diggle that his 50 caliber sniper rifle might not be enough just tells us how much of a threat Slade is.  You have to love that first handshake by Roy & Slade.  It was even more intense than the Ollie/Slade one.  There is only one handshake that was more intense than the Ollie/Slade & Roy/Slade handshakes and it involved Arnold Schwarzenegger and Carl Weathers:

Seeing Sara alive was the only time Slade Wilson seemed a bit rattled.  And while you knew it wasn’t going to turn into a brawl right there, that 10-20 seconds with Slade standing in between Oliver, Roy & Sara was a pretty intense moment.  Made even more intense by the fact that Thea & Moira were completely oblivious to the danger they were in at that moment.  Manu Bennett was a great casting as Slade Wilson and each time he's on screen, he just gets better and better in the role.  Seeing him be so charming and refined in the Queen household was such a stark contrast to the destruction we also witnessed of him in the island flashbacks was just fantastic.

I’m still wondering who it was that Slade has brought in on his team.  If you watched the 3-minute teaser for the rest of the season, then I think we have a pretty good idea that the identity is that of a returning character from season 1.  I also thought it was pretty slick how Slade was able to get cameras all throughout the Queen house.  I’m guessing Slade is going to put those cameras to good use against Thea & Moira.  Remember, he’s really backing Sebastian Blood. So I think his donation and support of Moira’s campaign was just so he could get into the house and plant those cameras.  It does make me wonder where Slade has gotten all this money from (did you see that nice car he had?).  Someone had to get Slade off that island and help him get back to get revenge.  So much stuff has happened this season but let’s not forget about H.I.V.E.  And let’s not forget that Isabel is still suspiciously absent.  Sure, revenge is the biggest motivator for Slade Wilson, but nothing on this show is ever that simple.  Oh and can we all agree this is the creepiest thing ever?

The rest of this season is going to be amazing.  From the promo for next week, looks like we get the Suicide Squad and they might be tracking Deathstroke.  That means more screen time for Diggle next week.  Every week this show leaves me checking the calendar to see how long I have to wait for the next episode and dreading the end of this season.  That's how you know this is a good show.  You finish one episode then feel like this when asked about the next episode: