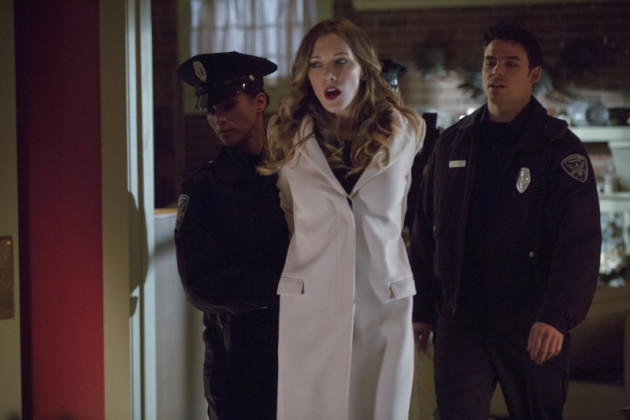 This latest episode of Arrow might not seem like a lot but to me, it really shows the how far this show has come in terms of writing. This episode really could have been called "Rock Bottom" because this episode basically ends with Laurel about to hit the bottom.  And it's done pretty well.   You can really feel that this second half of the season is slowly building to a pretty explosive conclusion.

The Fall of Laurel Lance - This episode pretty much backs up everything I said about the character of Laurel in my last review.  She's one of the more tragically unlucky characters on the show.  Halfway through this episode it seems like Laurel is finally getting back on track.  She uncovers the truth behind Sebastian Blood, she contacts Arrow to help and it really looks like she'll be getting it together.  The Blood uses a brilliant plan to not only protect her secret but completely discredit and break Laurel.  By the end of this episode, her addiction to prescription drugs is out in the open, she's lost her job and more importantly, she's lost the confidence and trust of both her father and Oliver.  I repeatedly see folks complain that Laurel isn't given anything to do on this show and I think they're just rushing it.  Laurel has been holding on by a thread since this show started and she's always had people there to catch and support her (Tommy, Oliver, her dad, etc).  With this episode it really seems like she's on her own.  This is what NEEDED to happen with her character but it could only happen at this point. One thing this has me wondering is....will Laurel end up becoming Black Canary? I know right now Sara is, but Laurel has been torn down so much and she's actually no slouch when it comes to defending herself.  And technically Laurel is Black Canary in the comics.  I'm wondering if she hasn't been lead down this dark path so that she can do like all the other characters on this show have done and actually become more heroic.  That's the reason I still like her character.  Yes, she's been put in "Damsel in Distress" situations, but most times, its not because she's being helpless and stupid.  I think having her somehow take over for her sister is the kind of twist this show would do.  I'm really interested in seeing what they do with her character now that she's been broken completely.

Sebastian Blood's Plan - When Slade Wilson tells Blood that he needs to "fix his problem", I really thought it was going to be the typical "kidnap Laurel and have her saved by Arrow" plot line that has been used countless times before.  I was actually a little disappointed because I've been liking this Sebastian Blood storyline and I didn't want to see it end.  I was pleasantly surprised when it turns out Blood had a two part plan.  Instead of just kidnapping Laurel off the top, he first discredited her by sending in Officer Dailey and the cops to find her stash of drugs.  Then he has Dailey kidnap and confront the Arrow in Blood's skull mask.  So when Dailey is inevitably defeated, Sebastian Blood still comes out on top because everyone thinks it was the drugs that was making Laurel suspect it was Sebastian Blood.  It was a perfect plan that protects Sebastian Blood from any suspicion.  Well, there was one person who didn't think it was perfect.....

DEATHSTROKE - Seeing Slade Wilson and full costume kill 4 men in like 5 seconds and then threatened Sebastian Blood with the "Don't ever be this sloppy again" sword to the throat....man...what else needs to be said?

The costume looks great and Manu Bennett has been slaying as Slade Wilson since Season 1.  But in that costume?  Yeah...I can't wait to see Oliver's face when Slade reveals himself.

Roy  Harper - I really like that Oliver is going to start training Roy.  It's about time he starts using Roy's passion for helping people.  Right now, Oliver's main concern is keeping an eye on Roy because he's been injected with the mirakuru. But I think Oliver's revelation from last week about how he really does need his team and how much he relies on others, will show him that Roy can be a real asset for him in the field.  Particularly now that Roy has been injected with the mirakuru and Oliver might have be facing an army of injected soldiers.  I think this is not only good character development for Roy but also for Oliver.  How much longer will he go before he reveals his true identity to Roy and actually start trusting him?

Another very solid episode.  Like I said before, you can see and tell where this is going and the suspension is building.  And there are still a lot of things from earlier in the season that can still pop up:

1.  Is Sara coming back and if she does, will that bring in Ra's Al Ghul and the rest of the League of Assassin's? And now that Laurel has reached this low point, what will that mean if Sara comes back?

2.   Speaking of the League of Assassin's, where is Malcolm Merlyn?  I know Moira scared him off with the mention of Ra's Al Ghul, but I doubt we've seen the last of him and the fact that he might be Thea's real father.

3.  Did you forget about H.I.V.E.?  That was who Deadshot said hired him to kill Diggle's brother.

4.  We haven't seen Isabel Rochev in a minute.  Still haven't decided if she's friend or foe yet.  Remember her name was on the List in Season 1.  I do find it curious that she was breathing down Oliver's neck for the beginning of the season but now she's seemed to back off.  Maybe she's been preoccupied with something sinister?

So yeah, that's 4 other subplots we've had brought up already this season in addition to this Slade/Blood focus we have right now.  It's why I love this show so much.  Even though we haven't had those other subplots brought up in a while, I have no doubt that the writers will be addressing them.  They always address the smallest things and these subplots seem like they could lead to things big enough to be their own major story arcs.  So I'm really looking forward to what they have in store for us next.  I can't wait.