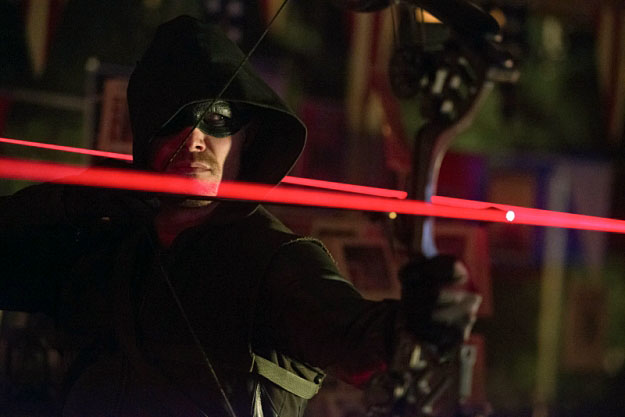 What makes Arrow such a good show is that even if the main story is filler, there's still a lot of good tidbits from other parts. This episode picks up shortly after the midseason finale with Felicity out of Starling City checking on Barry Allen's condition while Oliver tries to track down "the man in the skull mask" (Brother Blood). Distracting Oliver from this task is a new villain, Shrapnel, who is hell bent on blowing things up. To be honest, the main storyline with Shrapnel is just filler. But what makes Arrow stand out is that even though it's filler, it's used to bring together several smaller pieces. Here are some of the things that stand out to me:

Oliver's fear of Miraku - Only other time I've geniunely seen Oliver scared is when he was about to face Malcolm Merlyn that second time. And even then, it was more doubt than fear. Oliver is really frightened at the possibilities of dealing with an army of soldiers injected with the Miraku. Even in the flashbacks, we see the beginnings of Slade losing it on the serum.

The Conflict Between Oliver and Felicity - I keep saying this and every episode the writers of the show put a scene in that reflects it but, Oliver has NOT fully adjusted to being back in civilization. Most of the time he's just trying to control it but when he's stressed (and the hunt for Blood and the source of the Miraku is definitely doing that) he slips back into being an asshole. Oliver doesn't want to admit it but he's jealous of Barry and Felicity. And when Felicity loses track of Shrapnel the first time, Oliver shows how he's still not fully adjusted and lashes out at Felicity. And I love that Felicity didn't back down from him either. The great thing about this is that, it's not just the writers writing Oliver to be an asshole. They're writing growth into him. By the end of the episode Oliver is admitting to Felicity that he started off in this alone but now needs her as a partner in his mission. Didn't seem like much but that's a huge development for this character from the first season. Now if only he could admit that he has deeper feelings for her as well...

Roy hiding his super powers - I like Roy. He started off as one of those characters you're unsure of but he's been developing into a great character. So far we've seen him develop healing powers and super strength from the Miraku. It's going to be interesting seeing how the Miraku affect's his mental state. Right now he seems to be holding out pretty well. That could be because he didn't get as big of a dose as Cyrus Gold and Slade.

Laurel Lance - Laurel gets a ton of unnecessary shit from people in my opinion. First off, like every character on Arrow, Laurel is flawed but that just makes her (and everyone else on the show) more real. Secondly, can we give credit to Laurel for standing strong even though she's been through my shit than anyone not named Oliver Queen on this show? She thought her boyfriend and sister died 5 years ago when they were both sleeping together behind her back on her boyfriend's boat. She tries to move on, only to have her boyfriend show back up and turn her life upside down. Then she falls for his best friend and starts building a relationship with him but still cares for Oliver. Then Tommy dies (IN HER ARMS) after he came back to save her. Oh yeah and her father and mother divorced after they thought her sister died. Her dad is basically a recovering alcoholic. Jesus Christ. And even through all that, she's still not your typical damsel in distress. I remember the episode where she pulled out the shotgun on an assassin in the first season and she's kicked some ass in other episodes too. Even in this episode, she's the ONE person who realizes that Sebastian Blood is coming off as TOO perfect. And her previous bad choices in men and relationships has developed into her noticing the signs and questioning that something is up with this guy. To me, I like the character. She's not perfect but no one on this show is (well, except maybe Felicity). Even her issues with prescription drugs is very understandable. I like what they're doing with the character this season and I'm glad it's not focused on getting her and Oliver back together.

All in all, I liked this episode for all the things it did to build up this second half of season 2. I'm pretty sure Shrapnel will be back but other than bringing Arrow & Sebastian Blood together, he really didn't have much purpose. And I really liked the fact that Laurel looked deeper into Sebastian Blood. It shows her character is much more than she's given purpose for. I like it.

Oh and this has nothing to do with this episode but....next week's preview showed Slade Wilson in Deathstroke gear.