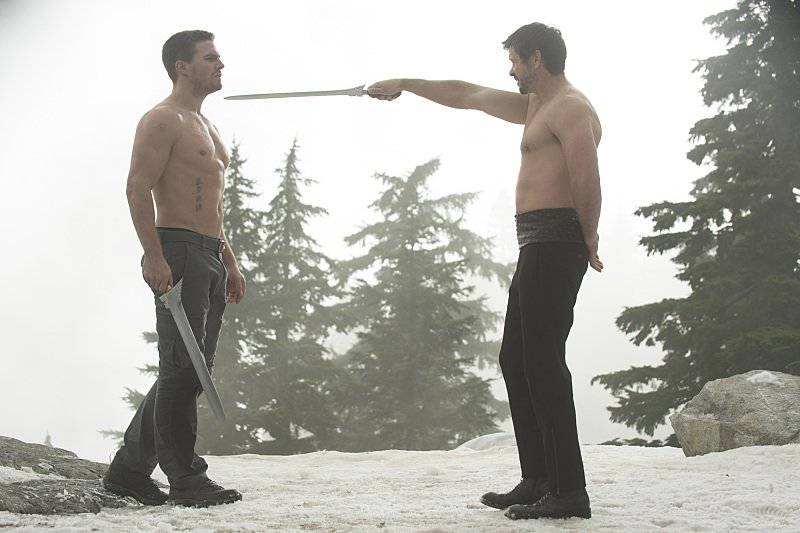 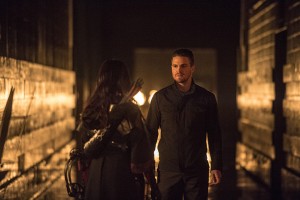 Well if you had “Thea” in the ‘Who Killed Sara?’ pool, you won.  I started suspecting Thea when Felicity mentioned that the trajectory of the arrow that killed Sara wasn’t from an archer at normal height.  I was almost certain though when the promos were saying that Oliver was the killer.  Not only is there only one person whose DNA would be close enough to Oliver’s to match his but there’s also only one person Oliver would face Ra’s Al Ghul in a duel to the death to protect.  It also reveals that Malcolm Merlyn is more evil than I could imagine.  Using Thea to kill Sara and then forcing Oliver to have to be the one to confront Ra’s is a brilliant plan.  I don’t think Merlyn really believed Oliver would defeat Ra’s.  I think Merlyn wanted Oliver out of Starling City for some other plan he has for himself and Thea.  The surprised look on Oliver’s face when Thea attacked him as the Arrow then jumped off the balcony was GOLD.  It was that “When did you learn how to do that?” face.  I mean she clearly was no match for Oliver but it damn sure wasn’t the ‘Speedy’ Oliver grew up with. 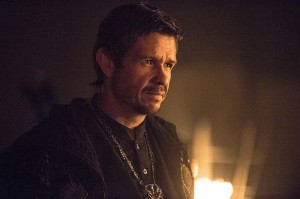 There was a lot of talk about Matt Noble not having the “look” of Ra’s Al Ghul and I agree.  He doesn’t really look like the Demon’s Head.  However, any of those concerns went away when he put that beating on Oliver.  Look, we’ve seen Oliver get his ass handed to him before but not like this.  Ra’s started the duel off with no weapons and Oliver had not one but TWO swords.  He told Oliver he didn’t need a weapon and would just take one off of Oliver’s dead body.  Then proceeded to whoop Oliver’s ass.  Ladies and gentlemen, Ra’s Al Ghul makes Malcolm Merlyn and Deathstroke seem like Kindergarten bullies.  I don’t even want to all this a fight because it was really one sided.  We haven’t seen Oliver struggle like this in a minute.  Even when he got a sword, Ra’s was taking on Oliver with one hand behind his back.  Matt Noble is Ra’s Al Ghul folks…I’m in 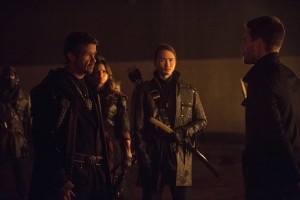 This episode ends like you’d expect from an episode of Arrow, with a cliff hanger (or dropper, which ever you prefer) that leaves you speechless.  Clearly I don’t believe Oliver is dead but the possibilities are endless for the second half of the season now.  While the first half of Season 3 started off slow and rough, I can now clearly see the path we’re on.   Oliver is going to be out of Starling City for a bit I believe.  He’s going to need to heal up (possibly a trip to the Lazarus Pits?).  That leaves Starling City with no one to protect it. I suspect we’ll see more of Roy as Arsenal stepping up in a big way.  This also gives us the final piece to the puzzle with Laurel donning the Black Canary costume.  I do think it’s going to be interesting to see her reaction when she finds out it was Thea Queen who killed Sara.  Granted, Thea had no control over it (as far as we know) but I’m wondering how Laurel will react.  Alex Kington’s return as Dinah was unexpected but welcomed this episode.  I like that it was Laurel’s mother who is finally the one who supports Laurel in wanting to find justice for Sara.  It was nice to see someone finally take Laurel’s side in this.

We also get our path to Ray donning the ATOM suit.  I did think the scenes with Ray & Felicity were a bit out of place (kinda like the Ronnie scenes in this week’s episode of The Flash).  But I understand why they were there.  We got some backstory on why Ray bought Queen Consolidated and what his plans are.  I also liked Felicity’s quip about being doomed to be attracted to men who want to be vigilantes.  Ray also made a point of mentioning miniaturization and after seeing what they do on The Flash, I expect them to “go there”.

This was a great episode of Arrow and ends with that typical Arrow ending we’ve kinda been missing the last few episodes.  I don’t think this episode was as good as last week’s crossover or the winter finales for Agents of SHIELD or The Flash, but it was still very good.  I also think it sets up the path of where the show is going this season and makes room for some other characters (Roy, Laurel, etc) to get more involved in the crime fighting in Starling City. Oh and I almost forgot, I love how they tied in the Hong Kong flashbacks to what’s happening now.  First the drug that Malcolm Merlyn used on Thea and then the fact that Maseo is now a member of the League of Assassin’s.  I’m wondering if he’s the one we see in the promo for episode 10 coming to Oliver’s aid.  We’ll see.