Some Things Can’t be Avoided With ‘Another Round’ 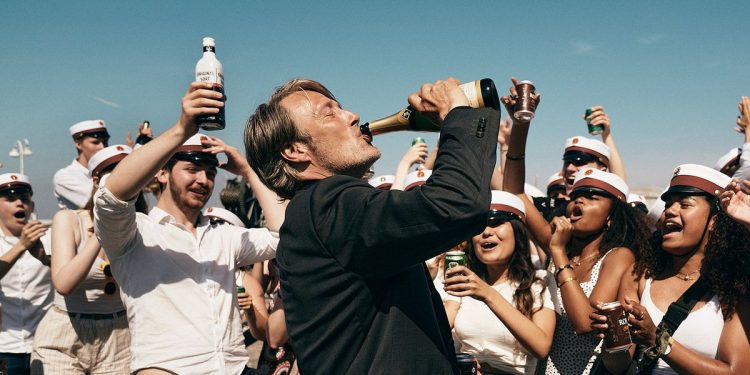 I'd love to tell you that the delay in getting this review out is because we decided to cosplay as Mads Mikkelsen in this movie and got blackout drunk and just forgot. But sadly that is not the case. Truth is life just happened and we got really really busy and this fell through the cracks. So we're turning this review into a premium audio episode. Grab a bottle (Beer, Wine or something harder) and sit back and enjoy.

Another Round (Titled: Druk in Danish) is a Danish comedy/drama that follows a group of four high school teachers who are way too old to be getting themselves into the trouble they do. Because their lives are going so well (is the sarcasm registering?), they decide to test a theory that humans actually perform better when they're at a sweet spot with their Blood Alcohol Level. Basically, the reason we aren't operating at our peak level because we're not drunk enough. Yeah, you can only imagine how this goes.

The main character in this film is Martin, played by Mads Mikkelsen. A man that's clearly going through a midlife crisis and has lost his passion in both teaching and his marriage. Clearly mixing that type of mindset with alcohol probably isn't a good idea and it goes about as you would expect it.

This is a Danish film and so it is subtitled. It's also not the typical comedy, so I don't think this is for everyone. There is a hilarious scene when the four men realize they need to make a store run and the drunken antics that occur are hilarious and the film is probably worth watching just for that. Also we get Mads Mikkelsen dancing. How can you say no to that?

You can check out Another Round now on Apple TV.