An Ode to Dylan McKay Upon the Passing of Luke Perry 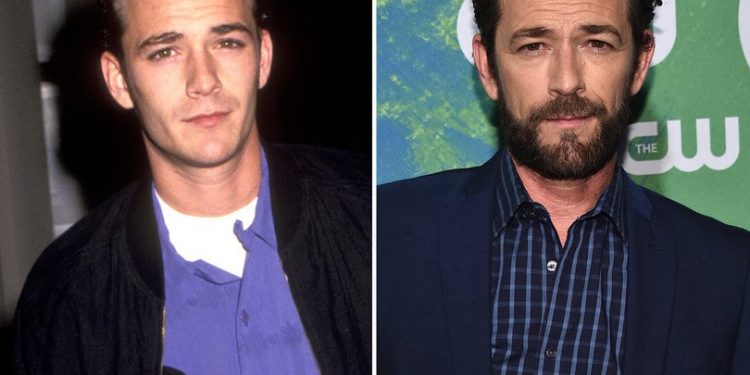 On March 4, 2019, Luke Perry passed away at the age of 52 after suffering from a stroke just a few days before. Most recently gracing our screens as the beleaguered father, Fred Andrews, on the CW's Riverdale, Perry has been a staple of American television since he portrayed the consummate teenage bad boy, Dylan McKay on Beverly Hills, 90210.

It seems sadly poetic that Perry should pass right as talk of a 90210 reboot (the series' second) was in the works with most of the original cast already signed on to reprise their roles in some way.

Beverly Hills 90210 premiered in 1990 and I was only 7 years old but I was OBSESSED with this show. So much so, that even when I was "on punishment" my aunt would let me watch it in secret (sorry mom!).

I blame 90210 (and Saved by the Bell) for my desire to go to school in Los Angeles. I was enamored with the palm trees and outdoor plazas where Brenda and Dylan would eat lunch, fight, break up and makeup. I was convinced that actual teens lived like this and I wanted to be one of them even though this world was the farthest thing from my existence in the projects in Brooklyn. Once my mom happened to be in Manhattan when Jason Priestly was doing a signing and brought me an autographed poster. I was mildly upset that it wasn't Jason and Luke (again, sorry mom!).

Dylan McKay was the ultimate bad boy with a heart of gold. He was leaning up against lockers before Jordan Catalano was a thought in some producer's brain. Rich, raised by an absentee father, Dylan was the Jay Gatsby of West Beverly High and Brenda Walsh (and later Kelly Taylor) was his Daisy. I guess that makes Brandon his Nick Carraway, which is an extremely apt analogy.

Dylan doesn't even appear until the third episode of the series. He shows up in a moment out of a dream, saving Brandon from some bullies. The two of them become best friends and Dylan is later linked to Brenda, the show's heroine.

Brenda and Dylan were the original #couplegoals. Their volatile on-again/off-again relationship was the pinnacle of teen angst. Dylan McKay was often the center of the television moments that shaped my understanding of who I was. Dylan revealing his alcoholism. The sensitive way he dealt with Brenda losing her virginity. The betrayal of Dylan and Kelly falling in love. Kelly choosing herself (I still would have chosen Dylan). I'm also pretty sure my enduring love of surfers comes from years of watching Dylan stare broodingly at the ocean. Dylan, and Luke Perry, was a heartthrob. My heart literally throbbed when he leaned against a locker.

While Dylan was the bad boy, his heart always shone through. In spite of his soap opera life, Dylan was funny, sweet and most of all kind. The seasons where he struggled with addiction afforded Luke Perry great opportunities to show off his acting chops but fans stuck with him because we knew our Dylan was a good guy. He stared at the ocean and read Byron to process his pain. Dylan's story was one of loss but also one of love. I wonder what he would have been like on this new reboot. Last we saw heard, he and Kelly tried to make a go of it but it didn't work out. It's sad that we'll never know whether Dylan McKay finally settles down with Brenda or Kelly.

In recent years, Luke Perry has been back on the teen circuit playing the iconic comic book character, Fred Andrews, on Riverdale. One-third of the Riverdale Hot Dads, Perry brought all of that gruff, Dylan McKay charm to his portrayal of Archie Andrews's father. For those of us old enough to remember the character that made him a household name, watching Dylan McKay be a single father was jarring but also an opportunity to renew that crush that secretly never went away. I think I called him Dylan throughout the entire first season of the show. When season 1 of the show ended with Fred being shot, OG fangirls yelled out in unison RIVERDALE BETTER NOT KILL DYLAN MCKAY.

Luke Perry's unexpected death feels surreal. Like a scripted television moment that will be undone when we come back from hiatus. I mean Fred Andrews pulled through after being shot in the Chocklit Shoppe!

Growing up a fangirl means eventually you have to deal with the fact that your idols may not be perfect (though from what I can tell Luke Perry was pretty darn close). And you also have to grapple with the knowledge that your crushes are not their characters but human beings in their own right. But right now, I want to live in a world where LA is always sunny and rich, bad boys fall in love with Midwestern girls. I want to believe that Dylan McKay will be waiting by that locker, with his crooked smile and brooding eyes. Because Dylan McKay doesn't die. He's just waiting for the bell to ring so we can go riding down the PCH in his Porsche. Like every good television boyfriend, Dylan McKay is eternal.

For more fangirl tributes to Dylan McKay and Luke Perry, check out this lovely piece from Go Fug Yourself's Jessica.