All In the Fight for Democracy 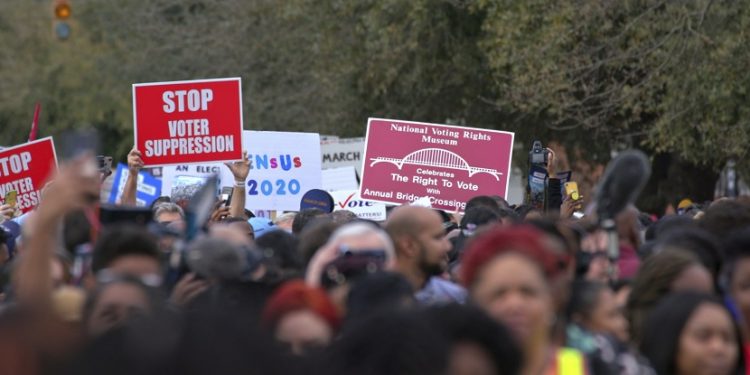 Ro9
All In is about far more than just what went wrong in Georgia. The timeline and corresponding explanations it provides exposes that the right to vote is undeniably and aggressively under attack...again.
9

All In the Fight for Democracy is a Call to Arms

Before there’s another debate, discussion or rant about voting, elections, or what voting in a democratic republic even means, every single person in the nation needs to watch All In: The Fight for Democracy.  Because the right to vote isn’t about “politics, it’s about people.”  It talks facts instead of indulging in rumors.

After 48 years, the Supreme Court repealed key sections of the Voting Right Act and with that destroyed the few safeguards on the right to vote in June of 2013. In the aftermath of the ruling, state legislatures moved swiftly to restrict access to the polls in order to suppress citizens ability to vote in state and federal elections.

The enormity of the issue came to a head during the 2018 Georgia gubernatorial election between Stacey Abrams and Brian Kemp as it became clear thousands of voters had been disenfranchised.

As the 2020 election approaches, voter suppression is once again a hot button topic. So, it’s never been more important to understand how the right to vote in the democratic republic that is the United State of America evolved and how white people in power work to keep control of voting criteria in order to restrict who’s treated as part of the body politic.

ALL IN: THE FIGHT FOR DEMOCRACY

All In tracks the progression and regression of voting rights since the founding of the nation, detangles the false narratives around the Voting Rights Act, and highlights how Barack Obama’s success acted as catalyst for renewed efforts to discourage participation in elections by manipulating the process and implementing voter suppression laws in order to outright disenfranchise lawfully eligible voters.

Watching all these efforts culminate in the debacle that is “modern” voting in America is certain to leave a sour taste in your mouth. But you'll learn more about US History and it's sordid relationship with the right to vote in 108 minutes than school ever bother to teach.

All In a exposes the insidious tactics of voter suppression and then asks the hard questions people shy away from in debate. If there isn't widespread voter fraud, what are the restrictions and mechanisms of voter control really for?

This documentary is less interested in stoic objectivity than it is honesty. Through interviews with experts, lobbyists (from both sides of the issue), historians, politicians, and lawyers coupled with poignant archival footage that more than speaks for itself, the struggle to vote stays front and center. Watch and learn. Then sit your people down; have them watch. Disenfranchisement is a corner stone civil rights issue that should be of a universal concern.

By the end of All In it’ll never be more apparent that, 1) participation can drive policy and 2) the powers that (want to) be will do any and everything to try to keep that from becoming a reality. Which means, that aims of real democracy are achievable only if the rights of all voters receive protection to exercises that right on all levels.

ALL IN: THE FIGHT FOR DEMOCRACY

Although partially framed around Stacy Abram’s run for Governor, All In is about far more than just what went wrong in Georgia. The timeline and corresponding explanations it provides exposes that the right to vote is undeniably and aggressively under attack...again.

A Needed Primer and Reminder

All In: The Fight for Democracy is a dynamic and engaging object lesson on what it takes to ‘know thine enemy’ and why everyone needs to be “all in” to watch our own backs. So, check your voter status because it’s not paranoia when people actually are out to get you.

Remember, voter turn out is the best remedy to voter suppression.  The laws and ideology of the nation will never change otherwise.

ALL IN: The Fight For Democracy - Official Trailer | Prime Video

In anticipation of the 2020 presidential election, ALL IN: THE FIGHT FOR DEMOCRACY examines the often overlooked, yet insidious issue of voter suppression in...

All In: The Fight for Democracy premieres on Prime Video September 18th, 2020