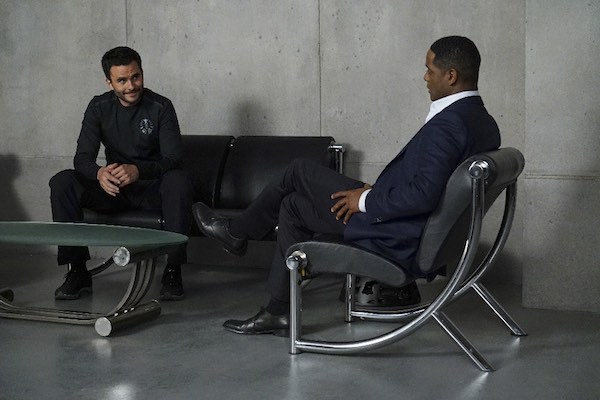 This show moves so quickly it no longer leaves things it could drag out a bit longer hanging around. That’s not to say that we get all the answers. We don’t, but we get enough to ask more serious questions. We find out this episode that Andrew is a new Inhuman (so much for the theory he changed before) but was changed because of a booby trap in one of the books he was researching from After Life. So Jiaying booby traps the ledger of all the names of Inhumans from After Life and it ends up changing Andrew into Lash who has an instinct to hunt down and kill them. I think it’s safe to say that Daisy’s mother was the worst leader of an Inhuman tribe ever. She only brought them death and destruction with her actions. 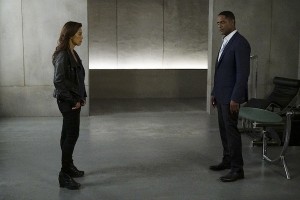 The emotional showdown between May and Andrew leads to Andrew/Lash being caught and put into stasis at the ATCU. But there are still so many questions about Lash. We know that Andrew is still changing and that eventually all that would be left would be Lash. We could even start to see the personality of Andrew changing a bit as he tried to fight it off. The question remains though, what is Lash’s purpose? Andrew said that he had to be near other Inhumans and it seems as if Lash had a desire to feed off them. It was almost instinct. Remember, the Kree created the Inhumans as weapons. Inhumans like Lash could be considered countermeasures for out of control Inhumans. One of the things about creating weapons is, if you create something to destroy your enemies, you need a way to protect yourself from it as well. So far we’ve seen two Inhumans that could be used as such: Lash and the other Inhuman that got sick around other Inhumans. Used together, that’s a countermeasure package against Inhumans.

It’s hard to say where May’s head is at after this. Andrew was the first person we’ve ever really seen May this vulnerable around. She even said in the flashback at the beginning that she didn’t think she deserved to be happy. Then the man she loves turns out to be a monster, through no fault of his own. What’s even more heartbreaking is that Andrew loves and cares for May. You can make an argument that he was only able to control Lash as long as he did because he was trying to find a way to work it out for May. It’s going to be interesting seeing May going forward. She’s pretty broken right now and the is the second time dealing with an Inhuman has done this to her (the little girl being the first). May is seen as the rock of the team and always in control. What does she do now? Does she go back to burying herself in her work and her job? Does the rest of the team (like Daisy) let her do that? 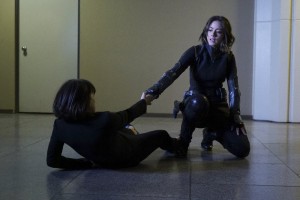 Rosalind and Coulson is such a spy vs spy game right now I’m not even sure what to believe. Is Rosalind working Coulson? Is Coulson working Rosalind? Are they working each other? Has Rosalind gotten the upper hand? Is she truly evil since she’s taking the call from Gideon? Man I don’t even know anymore. They’ve done such a great job humanizing Rosalind the last few episodes I started to believe she was on the right side. During the showdown with Lash she even told her men to follow Coulson’s lead. Then there’s the obvious sexual tension between the two (which they finally act on). And then they drop the bombshell that’s she’s calling Gideon as he’s talking to Ward. So is she really bad? Does Coulson suspect it? Man I don’t even know anymore and I love that I can’t tell. 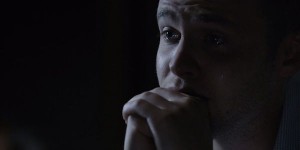 Fitz and Simmons are going to be the death of us all. I don’t know if I can take this much more. Fitz is such a great friend. I don’t want to call him a “good guy” because that’s become the mating call of the Men’s Right Activist douchebag. Fitz is hurt, he loves Simmons but he also recognizes that the situation is just as difficult for her and that she needs him as a friend. That’s why this can’t have a happy ending. If you didn’t get a little dusty when he said “For now we’ll just watch the sunrise”, then you’re probably dead inside.

Another fast pace, great episode. We’re starting to see how the multiple threads that have been seeded are going to come together. We’re also seeing how this season of Agents of SHIELD is doing a great job of laying the ground work for the debate in Captain America: Civil War. I don’t know what side to be on or what side could be right. Daisy is right to say that Inhumans deserve a chance and don’t need to be locked up. But Rosalind is also right that just one bad Inhuman is enough to cause concern. And then with May asking Daisy to help her make the choice with Andrew, it forced Daisy to make the choice she’s been arguing against.  This won’t be a simple black or white debate.

Catch the rest of my thoughts on the Super Tuesday Recap on iTunes and Stitcher. Live us a comment, review or an email to let us know what you think of this episode