He Advocated for Stop-And-Frisk on National TV 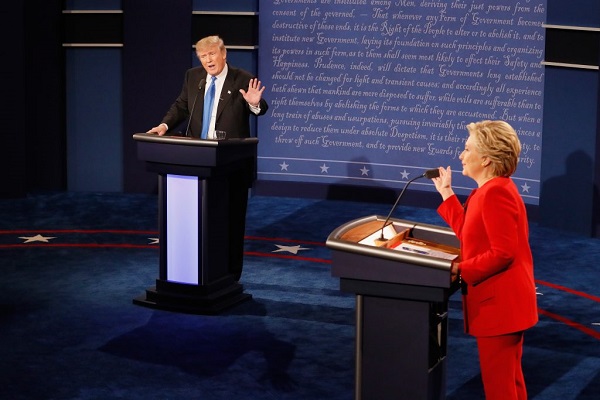 Democratic and Republican nominees for President, Hillary Clinton and Donald Trump, went head to head Monday night in the first of three Presidential debates. This particular debate was extremely high-risk as polls showed Clinton and Trump in a statistical dead heat entering it. The stakes were high and, quite frankly, the actual debate didn't live up to the hype.

The build-up to this debate was like nothing I'd ever seen before. The word "epic" was thrown around to describe the debate in the hours leading up to it. With an estimated 100 million people set to tune in, the talk before the debate was about what each candidate would need to in order to be seen as the winner.

Trump's bar was set extremely low. With much being made about his lack of preparation, Trump was given the easiest path to victory of the two nominees. Ryan Wiliams, a GOP strategist, told NBC News, "Trump has a very low bar — just go onstage and don't look completely unhinged, if he's somewhat statesmanlike with his trademark bravado, he'll do fine."

The atmosphere around the physical location of the debate itself was also pretty crazy. Jill Stein, the Green Party candidate for President decided to show up at Hofstra University, uninvited, and was promptly escorted off the premises. Not exactly sure what point she was trying to make, but whatever it was it certainly wasn't made.

The press spin room before and after the debate was a circus. Don King, a Trump surrogate, was on hand before the debate to help set expectations for his friend Donald Trump. Tony Schwartz, co-author of Trump's "The Art of the Deal", was in the press spin room championing Clinton, "I'm paying my penance for creating a monster" he stated. Former University of Indiana head basketball coach (and noted chair hurler) , Bobby Knight, was even in the spin room, rebutting Schwartz's description of Trump as a monster. Like I said, the spin room was a circus.

Then the debate started. And it simply wasn't fair. It was a beating on par with when my Oakland Raiders got beat in the Super Bowl some years back (nope, still don't want to talk about it).

Right off the bat we could tell it would be a long night for Donald Trump. Trump bungled a question about jobs, incorrectly stating that Ford is moving their plant to Mexico. Trump has stated this a number of times before, this time United Auto Workers and Ford fact checked him in real time. This section of the debate even included a conversation about Trump's taxes and included him probably admitting that he doesn't pay taxes.

The wheels really fell off, however, when moderator Lester Holt decided to ask a question about improving race relations. Both candidates chose this point to move from the actual question into a conversation about crime in "inner cities". To her credit, Hillary Clinton did go into a conversation about implicit bias (read: racism) and how all white Americans are guilty of this to some degree. Trump, on the other hand, decided to position himself as the "law and order" candidate and, as he has many times over the last week, Trump decided to advocate for stop-and-frisk as a solution to gun violence in Chicago. Trump went on to claim that stop-and-frisk helped to reduce murders in New York City, which is categorically false. When Lester Holt correctly pointed out that stop-and-frisk has been ruled unconstitutional due to it leading to nothing but racial profiling, Trump decided to dig a deeper grave: “No, you’re wrong." Trump responded, "It went before a judge who was a very against police judge. It was taken away from her and our mayor, our new mayor, refused to go forward with the case. They would have won an appeal." Donald Trump ladies and gentlemen, legal psychic. Trump's assertion that the judge that ruled that stop-and-frisk was racial profiling was "very against police" echoes his sentiments about the "Mexican judge" presiding over his Trump University suit.

The most infuriating part of this is that we had a Presidential candidate for a major political party onstage advocating, basically stumping, for a practice that is just racial profiling with a snappier name. Mind you, this is not the first time that Trump has advocated for racial profiling.

This is the smoking gun. We understand that Trump has a history of racist actions and his campaign is supported by known white supremacists, but advocating on a Presidential debate stage with 100 million people watching for racial profiling is a brand new low. A low that leaves no question as to where the Donald stands on race.

Ryan Williams said that Trump's bar  "very low", but he didn't even clear that bar. His fidgeting and lack of coherent dialogue on issues that mattered coupled with his advocacy for racial profiling and lack of apology for pushing the "birther" conspiracy contrasted with Hillary Clinton poorly. On time (and poll results) will show what kind of bounce or drop either candidate will get from the debate, but this debate was not a good look for Donald Trump.