In honor of Star Trek: Discovery coming out I wanted to take a moment to talk about my favorite Starship Captain of all time: Captain Benjamin Lafayette Sisko.

Oh what? You thought it would be Picard or Kirk? Please. Those are the default answers for most folks and it’s more about nostalgia than facts. As a kid who grew up watching Star Trek (first the original series on TVLand reruns, then TNG), I always loved the diversity of characters. Star Trek continually broke the mold when it came to showing not only racial diversity but diversity of thought. There were plenty of times when episodes challenged the ideas of gender roles and sexuality. Now that doesn’t mean there weren’t still problems (The Code of Honor episode of TNG is still hilariously unintentionally racist). But when Avery Brooks was cast as Benjamin Sisko and the show Deep Space Nine premiered, everything changed for me. A black person was going to be the lead character of a new series in my favorite Sci-Fi universe. And instantly my world changed. From the minute I watched Sisko walk with a little swagger around the station to the way he talked to his son Jake, I knew he would be my new favorite.

Here are some of my favorite moments involving the greatest Starfleet captain of all time:

In 1993, Picard was still my guy. He was MY CAPTAIN.  I love Patrick Stewart to this day and think it’s a travesty that there hasn’t been a buddy cop movie starring Patrick Stewart and Ian McKellen and their bromance. But when then Commander Benjamin Sisko confronted Captain Picard in the very first episode of Deep Space Nine, it was at that moment that I knew I had a new favorite. When I first watched this episode, I was young and not as perceptive when it comes to certain things on TV. Sure, the first thing we see in Deep Space Nine is the Battle of Wolf 359 and how then commander Sisko lost his entire ship, the Saratoga, and his wife when Locutus of the Borg (an assimilated Jean-Luc Picard) wiped out an entire fleet of starships. But I didn’t think that three years later Sisko would hold Picard accountable for what happened. When I saw the Enterprise docked outside of DS9 I just thought “we’ll get a passing of the torch.” Instead, Sisko gets Picard to give him the “I want to speak to your manager face” when he tells Picard that they met before...in battle...at Wolf 359. Greatest part? Technically Picard WAS the manager because he outranked Sisko. Picard is immediately flustered and can’t even look Sisko in the eyes. He gets up, paces around the room and changes the subject to Bajoran independence. Even when he tries to pull rank and give Sisko orders, Sisko cuts him off, tells him that he already knows his orders and leaves.

Picard shouldn’t feel too bad. Over the years Sisko would intimidate everyone, from the Cardassians to the Romulians, hell he apparently even intimidates Worf.

“You hit me. Picard never hit me”

Ah yes, the infamous punch. But here’s the thing about Sisko and Q, what really stands out to me is how Sisko just never entertained Q’s bullshit. Sisko could never hide his disdain for someone and always had the look on his face like a waiter who has to seat a group of people that came in 5 minutes before closing. Sisko never was one for putting up with anyone's shit.

The Day(season) After He Got Promoted 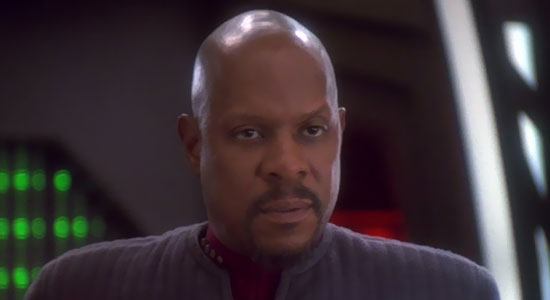 As a black person in a corporate setting, there’s always the struggle for how much of your “true self” you can show. From code switching to just keeping your head down and not making waves, we’ve all done it. Now clearly Sisko didn’t mind ruffling feathers before he got promoted to Captain, but after that promotion, he really didn’t give a fuck. The Federation should have known something was up when Sisko starting letting his facial hair grow out. That’s the first step in knowing a black man is fed up with your bullshit. Look at Steph Curry. Grew the Hollywood Hogan beard and now he’s got the President of the United States flustered. But then Sisko took it a step further and shaved off all his hair. We all know the story of Samson and Dehlilah but what they don’t tell you is that for the first 24-48 hours after getting his hair cut, Samson’s swag was on overload. Nothing will have you feeling yourself more than getting a haircut. Take it a step further and shave your head and you’ll be floating. Season 4 of Deep Space Nine opens with a new look for the freshly promoted Captain Benjamin Sisko: He’s was now fully bald. The level of fucks not given after Sisko goes bald are legendary (I even have some of those moments coming up). What makes it even better though is that Avery Brooks always wanted Sisko to be bald and actively campaigned for it. But the show runners worried that he would look too much like another character he played in the 80’s, Hawk. After 3 full seasons of playing Sisko though, they let him shave it all off and we really start to see Brooks get even more comfortable.

In The Pale Moonlight

“A guilty conscience is a small price to pay for the safety of the Alpha Quadrant. So I will learn to live with it. Because I can live with it.”

If there was one episode I had to pick to show the difference between Captain Benjamin Sisko and all the other StarFleet captains it would be Season 6 Episode 19, In the Pale Moonlight. It’s not that it took 6 seasons to define Sisko but that the format of this episode really gives you a great look at what kind of man Benjamin Sisko is. And that man is one that not only will do whatever he has to do for the greater good but one that can also live with those choices. The episode is set up with Sisko is recapping the events of the last 2 weeks in his personal log. He seems pained at the decisions and choices he’s made. The Federation is losing the war against the Dominion and the only way to turn the tide of war is to get the Romulans to declare war on the Dominion. Sisko decides he’s going to be the man to get the Romulans to join the war. He enlists the help of former (or current depending on how you look at it) Cardassian spy Garak to help him find a way to trick the Romulans into the war. The idea is to forge a holorecording of Dominion leaders planning the invasion of Romulus. What follows is Sisko making flat out morally corrupt decisions for the end goal. At one point he bribes Quark to which Quark replies “every man has their price.” It’s finally revealed that as a backup plan Garak planted a bomb on the ship of the high ranking Romulan official that Sisko was trying to trick using a forgery. Garak also kills the forger. While Sisko is initially upset at Garak, in his personal long he reveals the truth: That while he was responsible for all of these morally corrupt choices, his only problem is that he knows that he’s okay with all the choices he made. He would gladly make them again because the outcome would save lives. The episode ends with Sisko deleting the log and sitting back seemingly at peace with the decisions he made.

The First Time He Shows Up in the Defiant

Ok that's not exactly what Sisko says when he shows up in the Defiant but you know we were all thinking it.

Sisko was in charge of building the most overpowered ship the Federation ever constructed. And of course when time came to face the Dominion, Sisko would pull the ship out of mothballs to use for his own purposes. Sisko pulled up to DS9 with the Defiant like you pull up to your boys house to show off your new car. Just like in real life, Sisko didn’t call ahead, he didn’t warn anyone…he just pulls the Defiant up, scares this shit out of the folks on DS9 then rolls down the window like “WHAT UP MY NIGGAS!” Even better though? The Defiant wasn’t even street legal in the Alpha Quadrant. In addition to being crazily overpowered, the ship also had a cloaking device courtesy of the Romulan Empire that wasn’t supposed to be used in the Alpha Quadrant. But just like sometimes you gotta make a couple quick runs to the store even though your license has expired, Sisko definitely made Alpha Quadrant store runs cloaked.

Sisko is a Great Friend

Sisko is not only a great Captain but he’s also the kind of friend we all would want or strive to be. He tells you not what you want to hear but what you need to hear. But he will back your decisions no matter what because he’s your friend. When Jadzia Dax leaves the station to carry out a blood debt her former host had with a group of Klingons, Sisko tells Dax that by doing this, she might not be able to come back as a Starfleet officer. I mean he’s not wrong. Dax is heading off on a what could be a suicide mission to conduct an assassination. When Dax returns to DS9, Sisko gives her a disapproving look but quietly retires to his office. It was yet another example of the grey area Sisko operated in. He needed Dax to know he was disappointed in her choice but at the same time, he understood. The friendship between Dax and Sisko was always a highlight. Throughout the seasons Sisko always let Dax know what he thought but in the end, he always backed her all the way.

The only thing better than Sisko as a Captain and Sisko as a friend was Sisko as a father. While the rest of the memorable moments on this list aren’t in any particularly order, this one is. I saved the most memorable thing about Sisko for me as last. There are a lot of memorable black TV dads but Ben Sisko always seems to get forgotten. And that’s a shame because I think he might be one of the best black fathers ever depicted on TV. Sisko’s love for Jake is never in doubt. You get an unapologetic look at a father showing affection for his son and it’s incredible. There are so many great moments with Sisko and Jake to look to but the one that always stands out to me is Season 3 Episode 22, Explorers. Sisko takes Jake “sailing” in an ancient spaceship that operates like a sailboat. There are so many things I love about this episode:

This is hands down my favorite episode of DS9 simply for the father-son moments which might be my favorite black father moments on TV of all time.

Now this list is no where exhaustive. I could write for days listing out Sisko moments. Leave your favorite Ben Sisko moments in the comments and make sure you subscribe to our Super Tuesday Recap podcast where we will be reviewing Star Trek Discovery this season.