4 Things to Look For at the First Presidential Debate

Monday night the Democratic nominee, former Secretary of State Hillary Clinton, and Republican nominee, Donald Trump, will face off in the first of three scheduled Presidential debates. These debates are intended to showcase the platforms (or lack thereof) of both candidates to the voting populace. Trump is expected to show up and debate following some confusion around if he would actually attend the debates our skip them in protest of the moderators (apparently Trump “respect(s)” the chosen moderators). Here’s 4 things to look for at the first Presidential debate: 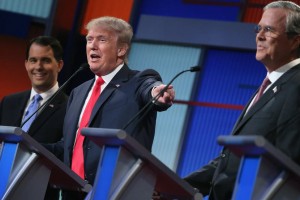 CLEVELAND, OH - AUGUST 06: Republican presidential candidates (L-R) Wisconsin Gov. Scott Walker, Donald Trump and Jeb Bush participate in the first prime-time presidential debate hosted by FOX News and Facebook at the Quicken Loans Arena August 6, 2015 in Cleveland, Ohio. The top-ten GOP candidates were selected to participate in the debate based on their rank in an average of the five most recent national political polls. (Photo by Chip Somodevilla/Getty Images)

Much has been made of Donald Trump’s lack of preparation for the Presidential debate. Trump himself has said that he has not done proper debate prep, opting to rather talk in the abstract with his advisors about debates.

I'm calling bullshit on this.

There’s a strategy when it comes to debates that many political campaigns use, it basically boils down to allowing you to manage expectations by either pumping up how good your opponent is in debates or downplaying how good you are in debates in order to win the war of public perception. We’ve seen this strategy employed by the likes of Mitt Romney and President Obama among others. Trump’s assertion that he has not prepared for the debate is nothing more than putting this strategy into effect.

By talking about how he hasn’t prepared for the debate, Trump has lowered expectations tremendously. If Trump is able to put together semi coherent thoughts then he can successfully spin that he won the debate barring any major gaffes. 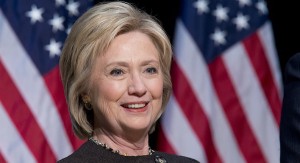 We’ve all seen the sexism that Hillary Clinton has had to deal with not just in this election, but dating back to her time as First Lady. Bernie Sanders and his supporters hurled sexist insults at Hillary during the Democratic primaries. Trump has most definitely used sexist attacks on Clinton. And there’s really no reason to believe that this will end during the debate or anytime after it. Mostly because the media has absolutely dropped the ball on calling this out and has rather decided to jump in on it. Case in point:

Anna Waters recently wrote a great piece for the Washington Post titled, “How could sexism hurt Clinton in the debates? These female high school debaters know”. In her piece, Waters points out, through conversations with female high school debaters, the sexism that they face in debating and how these issues are issues that Clinton has and will deal with and how it can potentially be harmful to Clinton going forward. Not surprisingly the female debaters (and Clinton herself) have to deal with the “not Presidential looking” barb. In fact this is a argument Trump himself has used numerous times and one that we will see at the debate and in the spin to follow.

Oh, did I mention that Trump has invited Gennifer Flowers to the debate?

Conversations about Clinton’s health are not new. In fact, this has been something that Trump and his campaign have been trying to push for months. In mid August, Trump started the #whereishillary on Twitter. Many of his supporters took to the hashtag to suggest that Hillary had a sort of neurological disorder and would be forced to drop out of the race. Trump himself added this gem at a rally a few days after the hashtag trended:

And this was all before Clinton announced that she was battling pneumonia. One can only imagine that this conversation will get far more airtime than the conversation about how Trump appeals to white supremacists. Speaking of….

A Coy Discussion of Trump’s Appeal to White Supremacists

The media has absolutely dropped the ball on this. Soledad O’Brien pointed out on CNN just how far the media has gone to not truly address the appeal of Trump to white supremacists: 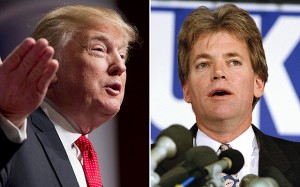 And she’s absolutely right. The media has not truly addressed the link between the Trump campaign and white supremacists all over this country. Lester Holt is one of the better television journalists working today, but I highly doubt we’ll get a real moment at the debate where Trump is grilled on his connection to white supremacists and his parroting of their messages and ideals. Most likely what we’ll get is a question directed at Trump about how white supremacist have come out and endorsed him and a rebuttal from Trump about how he can’t control everyone that endorses him and then we’ll move on to what are *clearly* more important topics.

Presidential debates can change the entire complexion of an election and this debate will be no different. These debates have the potential to change the entire landscape of an election. Barack Obama’s performance in the 2008 debates helped him win the Presidency as did George W. Bush’s performances against Al Gore in 2000 (although the Supreme Court had something to do with that too). These upcoming debates can have the same effect. The lead for Clinton has been shrinking recently in the polls, many states are up for grabs and these debates, starting with the debate on Monday night, will help decide all of this.