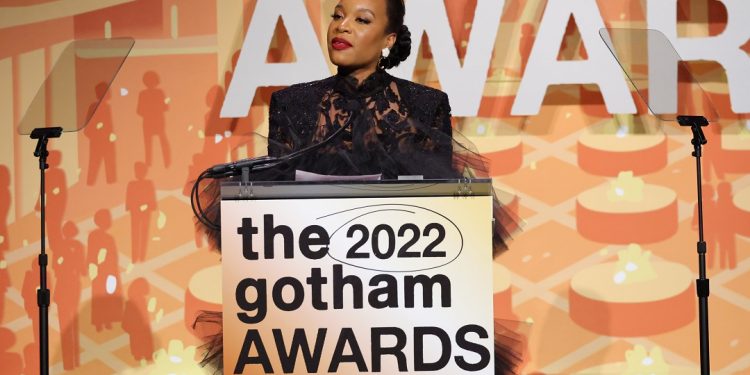 The Gotham Film & Media Institute (The Gotham) tonight announced the winners of the 32nd Annual Gotham Awards at a ceremony held at Cipriani Wall Street in New York City. The Gotham Awards ceremony was live-streamed on Variety’s YouTube channel.

Read the full list of nominees  and winners (in blue):

Career Tributes were also given during the ceremony to performers Michelle Williams (presented by Paul Dano) and Adam Sandler (presented by the Safdie Brothers); director Gina Prince-Bythewood (presented by Kathryn Bigelow);

An Impact Tribute was given to the Venice International Film Festival and its legendary current director Alberto Barbera (presented by Julianne Moore and Todd Haynes) in honor of the festival’s 90th anniversary and its impact on scores of independent films and filmmakers.

An Innovator Tribute was given to Don Katz, Founder and Executive Chairman of Audible, Inc. Since its 1995 launch, Katz’s company Audible has established itself as a leading creator and provider of premium audio storytelling.

The second annual Icon Tribute (presented by Gotham Board Member Jonathan Majors), created to call attention to the boldness, artistry, and impact of a filmmaker from a marginalized community whose work has not been previously recognized by the organization in its previous awards history was awarded to the legendary late actor, filmmaker, and activist Sidney Poitier. Accepting the award were members of the Poitier family – Anika, Pamela and Sherri Poitier.

Jonathan Majors also announced the creation of The Gotham Sidney Poitier Initiative, an ambitious set of programs developed around the spirit Sidney Poitier brought to the world as he broke down barriers in the film industry and the minds of audiences. SPI aims to expand on this legacy to support the next generation of filmmakers. Aligned closely with the priorities set by the Poitier family, the initiative will encompass the areas of mentorship, scholarship, project funding, and career advancement. The SPI Founders Committee is a collective of artists - actors, directors, producers, writers, and executives - who have aligned with the shared goal of shaping this initiative to optimally support Sidney Poitier’s living legacy.

Also announced during the ceremony:

Executive Director Jeffrey Sharp welcomed the presence of Gotham-supported filmmakers from two of the organization’s most recent initiatives – the previously announced Fellows of the new Documentary Development Initiative in partnership with HBO Documentary Films, as well as announcing the latest five graduate student winners in the Focus Features & JetBlue Showcase.

The program is designed to discover and empower a diverse group of emerging filmmakers and foster multi-platform distribution of their work. The winners of the fourth annual Focus Features & JetBlue Short Film Showcase will receive a $10,000 grant and have their films shown for twelve months on JetBlue’s seatback entertainment systems under the “Gotham Selects” movie category and on Focus Features digital streaming platforms. The winning filmmakers will also receive ongoing mentorship and workshopping opportunities from The Gotham and “Every House” Soho House worldwide membership.

About the Gotham Awards