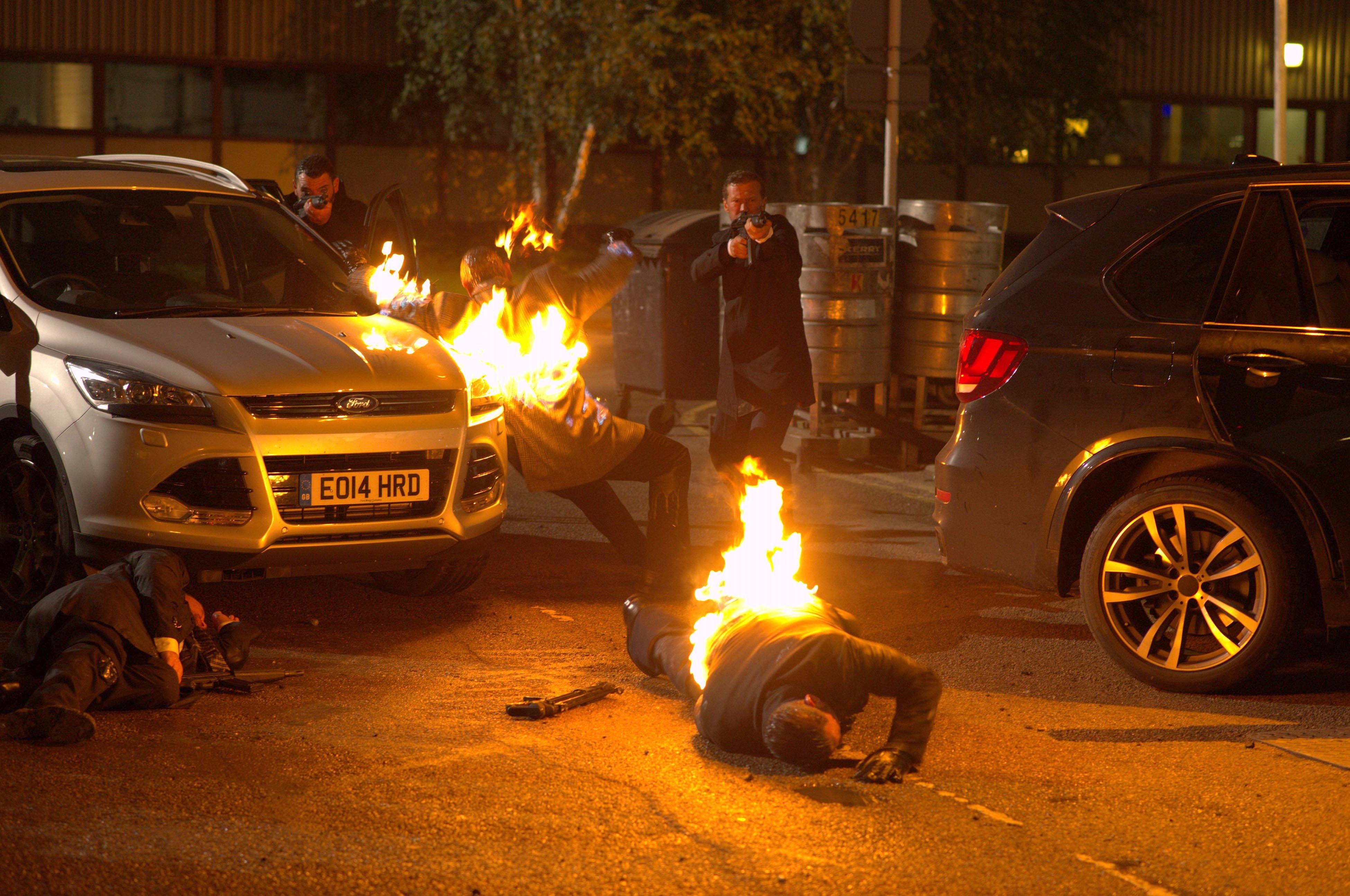 After the way the last episode ended and the fact that this is the penultimate episode, you knew the action and pace would have to keep up. At this point the show can’t afford to waste any time and this episode does not disappoint. 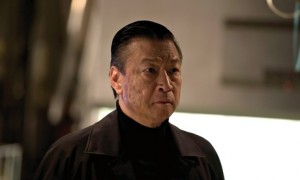 What do you mean Jack Bauer is here?

Jack and Kate make one hell of a Impossible White Man dynamic duo. They killed just about every Russian agent coming after them..........with handguns. By the time backup arrived Jack and Kate killed every Russian but two. They even blew up a propane tank and set some of them on fire. They set them on FIRE. The disrespect Kate & Jack displayed in dispatching the Russians is equal to the disrespect Jack showed Islamic terrorists in previous seasons. At one point Kate asks Jack if they’re Adrian Cross’ men and Jack responds “No they’re too organized”….as him and Kate easily kill them all with handguns. Then instead of asking for an assault rifle to go after the Override Device, Jack just asks for a couple of clips for his handgun. I’ll have to talk to Rod but I think one of the most impossible things about Jack Bauer is that 90% of the time his weapon of choice is just a handgun. “Hey Jack, we need you to take out this gang of Russian Agents who are armed with bullet proof vests and assault rifle.” Jack’s only response is usually “Can I kill them all or do I need to leave some alive for questioning later?” Remember, Jack broke into the US Embassy and took on Marines with….a handgun.

There were a lot of “oh shit” panic faces in this episode. Cheng had the first one when he realized Jack Bauer was rolling up on the building. That has to be the equivalent of looking outside your window and seeing the Grim Reaper sharpening his scythe. But Cheng didn’t even have the best panic face. That is reserved for when everyone else finds out he’s alive. Even Jack’s…although Jack’s was more out of annoyance than anything else. Everyone else’s face was good because I think I was the same look we all had. After Jack tells the President Heller that Cheng Zhi’s still alive and that he has the Override Device the look on everyone’s face in the room is even more priceless. Pretty sure Audrey immediately had flashbacks and had a mini-panic attack.

Show me the Receipts

Yeah the Chinese President ain't trying to hear none of the excuses President Heller was trying to give him about why a Chinese Aircraft Carrier was sunk by a US submarine. That’s actually one of the great things about this episode that I like. It makes sense. The British Prime Minister was more willing to be understanding and believe President Heller because of the relationship between the two countries. If I'm China I don't believe a word that Heller says. President Wei even said that the US was not happy with the carrier being in those waters anyway. So there's a natural level of distrust. When Heller told him that it was Cheng who was behind the attack, President Wei looked at him like a parent whose kid just blamed their imaginary friend for breaking the flat screen TV. Even when he said producing Cheng could make him stand down he didn't waste any time mobilizing forces. Hell, he didn't even guarantee that would be enough to stop an attack. He just agreed that it would be just enough to listen. Wei was like “Huh uh…sure…word….ok….right….k”. He wasn’t hearing NOTHING Heller was saying. And while I get it was supposed to be an indication of good will, how awkward was it for the Massachusetts to be there to help rescue the survivors? “Hey guys….sorry about that. My bad”
Do what you have to do 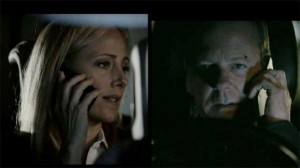 Audrey's first words to Jack were " kill him". Jack couldn't even say "hi". Every time there’s an episode where Mark does something insanely insecure when it comes to his relationship with Audrey, the following episode pretty much confirms he had every right to be concerned. That’s not your girl Mark. The only thing missing from the conversation between Jack and Audrey was Jack telling her to put the phone on speaker as she touched herself so he knows she still loves him. Had Kate not been in that car, who knows what would have happened. Audrey pretty much told Jack to get whatever information he needed to from Cheng and then kill him because it would make the world a better place. 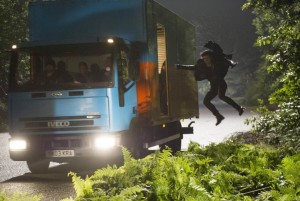 Chloe’s face was annoying the hell out of me last week but this week she was a lot better. That could also be because there wasn’t actually a lot of her.   Even her attempt at grabbing the phone annoyed me. It was so obvious. I don’t even think the original plan was to record Cheng’s voice to be honest. Knowing how Chloe operates and is incompetent with anything that isn’t computer related, I think she recorded Cheng by accident. I will give props where props are due though. Chloe taking out Cheng and his men with a pipe then jumping out of a moving truck has to be the second most bad ass thing (in a very very very short list) that Chloe has ever done. It actually made up for her weak ass attempt at grabbing the phone.

“What do I do when the bullets start flying?” 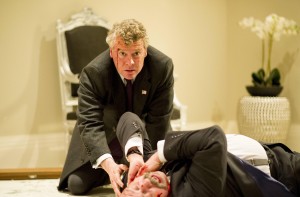 Anatol died from taking a glass hard to the neck after wrestling with the world's most insecure man...

Jack is such an asshole. Whenever Jack is sending a person into a dangerous situation and is trying to reassure them, you can tell he really doesn't care. Mark was so unbelievably awkward during not only the car ride but his entire time trying to convince Anatol that he wanted to defect was so suspect. This fat cushy job must have made Anatol soft cause there’s no way he shouldn’t have known something was up. Mark literally comes into the house and pans around so the camera could view everyone. Then Jack & Kate do what they do best which is murder Russians. I like how in order to prevent World War 3, Jack and Kate have to break into a secure Russian diplomat’s house, murder his staff and then interrogate him.  Cause that's in no way gonna cause even more problems for the US and Jack.

I've seen this movie before. Person gets a phone call and when they answer it's a person who says they have a sniper trained on them. It was called Phone Booth starred Colin Farrell. Wanna know who the sniper was? Kiefer Sutherland. Coincidence? I think not. Also is anyone shocked that Audrey’s in this position? Nah…I didn’t think so.

There are a couple of things that didn’t make sense to me but didn’t bother my overall enjoyment of this episode. First off, I don't know what they plan on doing with Heller’s disease.  They seem to be setting up for members of his staff to question his competency. But with only one episode left don't know how much they can do. They seem to be trying to wrap things up in 12 episodes so I'm not even sure if they do another season if it will just be the next 12 hours( episodes). That’s the only way this really would play a major factor. It’s only been a negative factor on the show once and that’s when the Prime Minister sent in a team after Jack when he was questioning the President’s abilities to think rationally. And even that was resolved. I would have liked to see this have more of an impact. Right now it actually gives Heller a little more freedom because he’s already planning on resigning. The other thing that I questioned with this episode was what exactly the Russians get out of starting a war between China and the US. They said in the episode that doing so would allow the Russians to have free access to the Middle East but let’s think about this. Two big, nuclear superpowers going to War is bad for the entire world. No one wins in that. Who cares if you own all the oil fields in the Middle East if the entire world is a nuclear wasteland? Sounds like the Russians were using Lex Luthor’s plan from Superman The Movie to get ahead. Not exactly a brilliant plan.