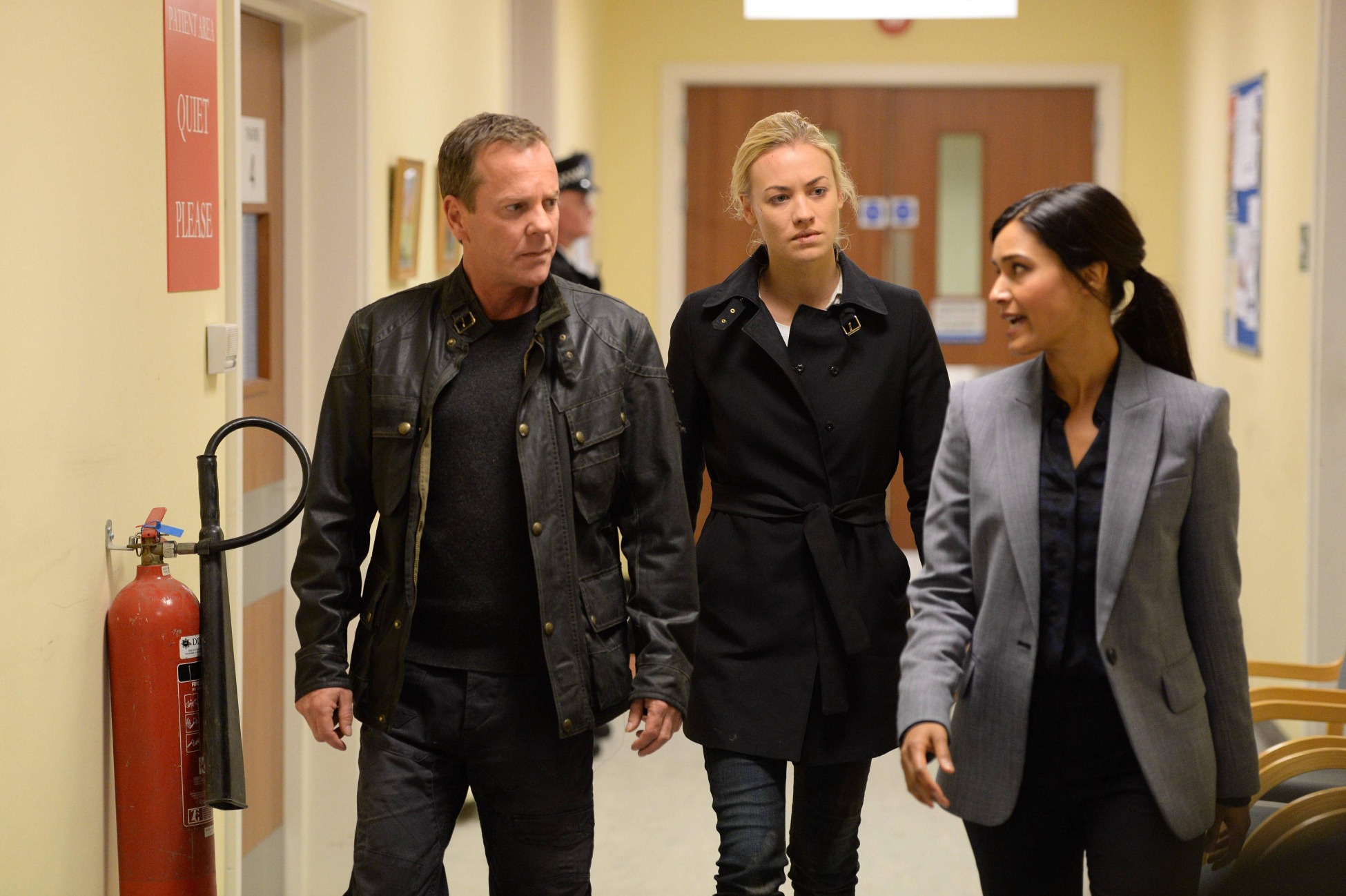 Jack Bauer is one of the greatest Impossible White Men of all time.  He's second only to John McClane and even then I think there's a solid argument that could be made as to why Jack is #1.  This episode was great.  We're now in the second half of the season and business is definitely picking up.  There's a lot of things going on here capped off by the most ridiculous and over the top Impossible White Man action scene ever on TV.  I loved every minute of it too.

As I've mentioned before, because this is a shorter season, the plot and storyline is moving along at a extremely quick pace.  In previous seasons of 24, we would have gone a whole episodes or two without Jack & the authorities realizing they had Simone al-Harazi.  But with this shortened season they figure that out pretty quick and Jack is on scene in no time.  Several people have mentioned that maybe what they'll do is only do the first 12 hours this season and then pick up next season with the last 12.  While that would be pretty cool, I think the imminent terrorist threat with Margot will be taken care of in these 12 episodes.  There's a subplot developing that I believe could be the basis for another 12 episodes picking up immediately after this first 12 episodes but I will get into that later.  Anyway, you can tell they trimmed out filler this season because President Heller confronting Prime Minister Davies about MI5's involvement last episode was a little less confrontational than you would normally expect.  Davies pretty much just backed down even after confronting Heller about the rumors about his mental health.  Heller basically told him "I got this" and Davies said "Okay, Jack can have whatever he needs".

Jack has that look on his face like a toddler just caught with his hands in the cookie jar. In this case it was Jack torturing Simone but....details

Jack's a cold son of a bitch to be torturing Simone fresh off of her getting hit by a bus.  Rubbing the nub of where her fingers used to be was some pretty gruesome ass stuff.  Also when he was trying to help her leave before the drone attack and Simone was still in denial, Jack really did leave her leaning against the wall and watched her slide down it.  That's why I was a little confused when Jack seemed remorseful to Kate Morgan when she walked in on him semi-torturing Simone.  I don't know where they new found remorse and regret came from but it just seemed a little out of place.  Speaking of Kate Morgan, how tough is this woman?  Last episode she was tortured and had to kill a man with both her hands tied behind her back.  She probably still has his blood on her.  And this episode she's calmly walking around the hospital, comforting a distraught little girl like a nurturing mother.  Also shoutout to the little girl who plays Yasmin.  Normally kids on 24 annoy the fuck outta me but I liked this little girl.  Nothing about her screamed "dumb little kid" like most kids on previous seasons.  I also have to mention Jack's new found power of recognizing an assassin out of the blue.  I haven't seen perceptive powers like that since "Steven Vision" on Steven Seagal Lawman.

I told you all I didn't like Adrian Cross.  He came off as some smug, untrustworthy piece of shit and looks like I was right.  He's the person talking to Navarro and helped set up Adam Morgan.  I knew I

didn't like these two for a reason when they were first introduced.  I think this subplot will play out a little bit over the last 5 episodes of this season but I really think the best thing to do would be to do season 10 as the next 12 hours in this 24 hour day and focus on what's going on with Navarro, Cross and Kate & Adam Morgan.    Yes, this treacherous turns were predictable but as I've mentioned before, that's 24.  I believe Jordan is smart enough to figure out Navarro set him up. I immediately noticed he was only shot in the shoulder and I knew he would still be alive.  I'm interested in seeing how this plays out.

The last 15 minutes or so of this episode was the best impossible white man shit I've seen on TV.  It was so over the top and absurd.  Like I said in the last review, Margot is about the mission of revenge and not even family will top that.  Even Ian was trying to tell her that she didn't have to do that and she didn't care.  She has no room for disloyalty, even from family.  As soon as she found out Simone would be broken, she turned into Amanda Waller and decided a drone strike would fix everything.  What she didn't count on was the Impossible White Man powers of Jack Bauer.  Jack sped away from a hellfire missile blast that destroyed a hospital.......in a sedan.  They actually showed the aftermath and the hospital was completely destroyed and there were people walking around missing limbs.  What followed thing was the most absurd thing I've ever seen, even for 24.  AND I FUCKING LOVED IT.  I didn't care if it was completely disregarding the laws of science.  It was awesome. It was so absurd at one point Ian looked at Margot with that "I don't understand how he's doing this?" face.  This is why I love this show.  They threw reality aside and just said "hey, you guys ready to be entertained...watch this."And we still have 5 more episodes.  Oh man. Can't wait.

Mark gonna get blackmailed.  Russian dude figured it all out and Mark has just put himself in the worst possible position imaginable.  Only thing that could save him is if the President really hands himself over to Margot and gets himself killed.  By the way, I think the President put a tracking device on himself.  Only reason to explain why he would ask for another jacket when he had one AND ask for Jack to meet him.  I think he's going to leave a message for Jack to track him back to Margot and take out the threat.  Of course it won't go that smoothly but that's my prediction for how this story plays out.

Again another great episode of 24 Live Another Day.  I wasn't expecting this season to be this entertaining but I'm glad I was wrong.