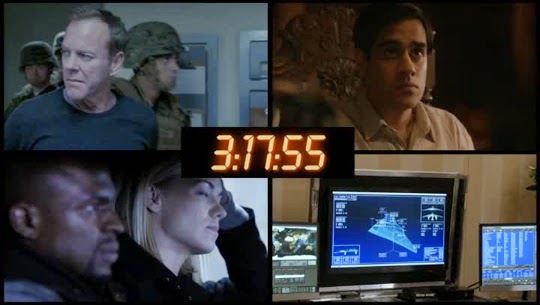 Normally we do audio reviews for this season of 24 but we've been having some scheduling issues and we already missed one episode so I'm just going to write this one for the last 2 episodes.

Let me start off by saying this season of 24 is predictable...just like every season of 24.  24 is one of those shows where the saying "if it's not broke, don't fix it" really applies. We know Jack is right and no one is going to listen to him.  We know that the government is going to be filled with people who put the whole fate of the country and sometimes the world on the line for a personal issue that could have been talked through over a cup of coffee.  We know that the terrorists always seem to have the world’s most intricate plans and backup plans.  We know that CTU (or in this case the CIA) has the world’s WORST security (throw in the embassy as well).  Only thing we’re missing right now is a traitor popping up and I feel we’re about 1 or 2 episodes away from that.  And you know what?  I don’t care.  I STILL love this show.  I think this shorter 12 episode season is actually refreshing for the show because it actually cuts out some of the filler and side stories.  So far no annoying kids.  Sure it’s weird having a show called “24” and you know there’s only going to be 12 hours, but I can get over this.

Let's start off with this review, during the 4th hour we get Jack infiltrating the Embassy in London with Kate and Morgan hot on his heels.  This is what I call “Jack being Jack”.  So first he shoots two innocent people in the kneecaps the episode before to cause a distraction and infiltrate the Embassy. Then he chokes out an agent to take his jacket.  Then he knocks out Captain Denovo so he can talk to Lt. Tanner and get his flight key.  As if THAT wasn’t enough, he then locks himself into the communication room and takes hostages.  Oh, and that’s after shooting 2 Marines square in their body armor to show he means business. One thing that struck me about this whole thing was how focused Jack is. A focused Jack Bauer is one helluva force of nature.   He’s really on a mission and as much as he says it’s not because of his personal relationship with President Heller and Audrey, I don’t see Jack putting this much on the line out of duty to a country that has repeatedly turned its back on him.

President Heller did pretty well in front of the Parliament.  Typical 24.  The last we saw of him in the episode before it looked like they were about to eat him alive and then we cut to the end of his address and they’re applauding him like Obama giving his 2008 acceptance speech.  What this tells me is that his disease is going to hit hard at an even more inopportune time.  He seemed pretty on the ball not only with the speech but when Mark told him it was Jack Bauer holed up at the embassy.  So when Heller finally does crack, it’s going to be even worse than if he had cracked in front of Parliament.  And I can’t wait for it.

I don’t know who is crazier, Margot Al-Harazi or Simone and Naveed for not realizing that Margot is bat shit insane and fully in for the cause and nothing else. First off, Naveed thought

Simone would back his plan to leave over her mother.  What a delusional fool.  Simone listened to her mother, left Naveed to go “undercover” (literally) and sleep her way to taking the drone override program from Derrick Yates.  All because her mother asked.  That woman is always going to pick her mother over her man every day.  Not only that but Naveed was having second thoughts about killing innocent folks and yet his wife described how she killed a man.  Typical man letting the wrong part of his body make his decisions for me.  That must have been one helluva blowjob.  And Simone really thought she was safe from harm by telling her mother Naveed’s plan.  She’s now a couple fingers short for that.  Margot is in full revenge mode. Then again I’d expect nothing less from a woman who crawled away from a drone attack that killed like 25 people.

Shoutout to Kate Morgan for her very Jack Bauer-like plan to get Jack out of the Embassy alive.  Crawled through the vents, confronted Jack and then stared down a bunch of Marines who were looking for blood.  She’s piecing things together and is the only one realizing that Jack might be the only right and competent person she’s interacting with.  Which leads me right to….

The 5th hour is when I had an epiphany:  If there are more season of 24 after this one (don’t see why there wouldn’t be) Kate Morgan should replace Jack Bauer.   It almost seems obvious now.  Kiefer Sutherland is getting older and while I do love watching Jack being Jack, it does get stale.  Yvonne Strahovski has been great as Kate Morgan AND if you really think about it, she’s been doing Jack Bauer-lite stuff since the season started.  She’s clearly the best agent in the CIA field office.  There’s a built-in reason why they have a hard time trusting her and the yet to be fully revealed backstory involving her husband can come back in later seasons. They even do that thing with Kate that they normally do with Jack where they bench her when it’s clear that she’s the best agent they have in the field. She even helped Chloe hack into the CIA’s network so she could have her “I told you so” moment by saving the asses of Steve “I want to think I’m in control when I’m not” Navarro and Erik “I’m never gonna run point am I?” Ritter.   And next week she’s running side-by-side with Jack and he’s throwing her right into the fire?  Yup, go ahead and give me a whole season of Kate Morgan violating suspected terrorists rights.  We’re gonna find out they’re cousins.

Not only do I not trust Adrian Cross but I’ve never liked his character.  I think I figured out what it is too.  He has this whole Wikileaks/Julian Assange/Edward Snowden vibe to him.  He was all about releasing information to make the government look bad, but now that he has a chance to step up and actually help stop people from dying, he’s basically saying “that’s not my job.”  I don’t mind him having a moral code or even struggling with the dilemma of helping someone like Jack Bauer who really does represent everything he’s fought against.  But I do not like the fact that he’s unwilling to put that aside to combat the bigger threat and evil.  Don’t get me wrong, my dislike of this character is not a knock against the show, it’s actually a positive.  This is exactly why I do not like the Wikileaks/Snowden’s of the world.

Naveed Naveed Naveed…..this poor guy.  He’s really that guy who just doesn’t get the hint.  He got in over his head more than likely over vagina.  I’m convinced that the whole reason he’s involved in this mess is that he truly loves Simone and would do anything for her.  He was so blinded by love he didn’t even notice that Ian was taking notes on how to pilot the drones making Naveed nothing more than a liability.    I mean really, at this point, any kid with an Xbox or Playstation who has played Call of Duty could probably learn Naveed’s role.  And having been betrayed by Simone once, HE TRUSTED HER AGAIN.   The look on his face when Simone doesn't come to his defense was priceless.  Simone basically put her own husband in the friendzone then let her mom blow his brains out.  That's all on Naveed for not reading the writing on the wall.  She betrayed him 2 previous times but he decided to try to be Jesus and let her Judas him for a third.

Finally, I have to admit that Mark Boudreau was right to want to keep Jack’s existence away from Audrey.  That’s still Jack’s girl.  Five minutes alone with Jack and Audrey looked like she forgot she had Mark’s last name.  Before those scenes I thought Mark was just being your typical insecure man who has a woman who loves him yet he’s still think she’s not over her Ex.  Well, Mark might be insecure but he’s right:  Audrey isn’t over her ex.  He’s lucky Jack’s hands were cuffed behind his back.  And I can't end this review without mentioning my favorite part which was Jack Bauer basically telling the President of the United States that he doesn't trust him to get the job done and that they were just gonna mess it up and slow him down.  Jack's fed up.

I give episode 4 a B+ but episode 5 is an A for me.  It gets an A just because I’m seeing things come together and I really like the character of Kate Morgan. As I said at the beginning, the condensed season gives us the typical 24 predictability and feel but also less of the filler.  I actually was hesitant about this season when it was announced but I’ve been enjoying it.  It’s classic 24 and while that means it’s predictable, as I mentioned in our review of the first episode, this season seems to explain things better. It makes sense that no one is listening to Jack (he’s a terrorist) or Kate (her husband was a traitor).  And with the shorter season it’s taken us less time to get to the “Okay maybe Jack (and Kate) DO know what they are doing” phase.  I’m in and loving this season.