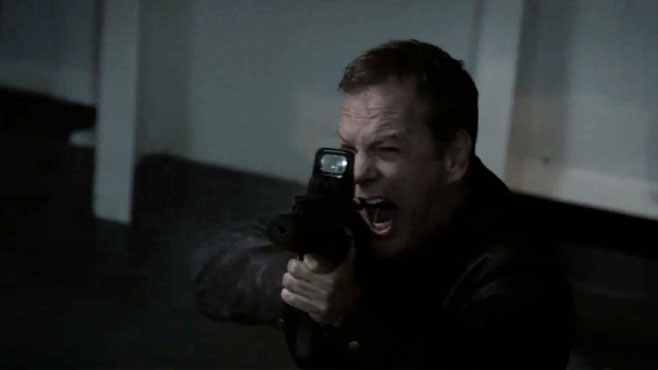 It’s the end of the season of 24 and this episode probably had more emotions in it than any previous episode this season. Even though the episode didn’t end with Jack’s death, it did in a way that felt like a final goodbye to the character while still leaving the door open for his return.

A Series of Fortunate Coincidence 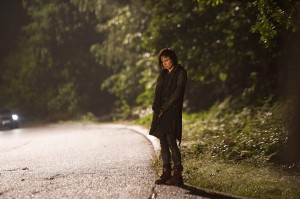 With the shortened season, the writers had a smaller window to wrap everything up. Considering the world was on the brink of World War 3, wrapping everything up was a pretty big task with one final episode. But the series managed it with a series of lucky coincidences. Jack just happens to find a phone with Anatol’s communication about a freighter leaving and assumes that’s the one Cheng will be on. Then Chloe just happened flag down a vehicle that stopped (I guess people are more friendly in London). Oh and they let her use their phone (Yeah….not happening) AND she just so happens knows how to contact Jack. Before you say ‘well she called him before’, remember Jack’s phone was compromised so I’m pretty sure he got a new number. But who cares? Jack had World War 3 to stop and short timeframe to do it so we didn’t need the gaps filled in. 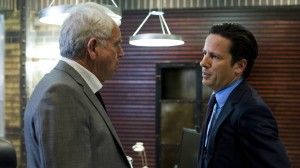 I have a daughter?

I guess be honest, Audrey’s death got to me a bit. I think it was necessary for some things that occurred with Jack & Heller later on, but I still wish it was Chloe who took the bullet. It did suck that Kate and her team worked pretty well to get Audrey away from the sniper and kill him only to have her shot after everything died down from a second gunman. I also think Audrey’s death will weigh heavily on Kate. At the end, it seems like she turned in her badge and gun but I’m hoping that’s just temporary (I will get into that later).

The scene at Air Force One with the President talking to the Prime Minister was pretty emotionally powerful and sad. Heller first talking about how before this day he was already struggling to remember Audrey’s face and how he would stare at her picture and trying to figure out who she was. Then when he tells the Prime Minister that he won’t even remember today or that he had a daughter…man listen. I almost got a little choked up. Of course Jack handles Audrey’s death a bit different…. 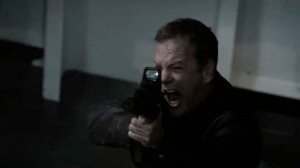 Fuck the Hulk...you wouldn't like Jack Bauer when he's angry

Jack is a machine. First off, him and Belcheck (with the help of Chloe on the coms) work as a well-oiled machine clearing off part of the boat. We didn’t really get any info on who Belcheck is but he’s obviously trusted by Jack and very skilled. Then Jack finds out Audrey is dead. What happens next is one of them most incredible Impossible White Man power up I’ve seen in a long time. Jack takes a few seconds to dry cry (no real tears), then he just gets angry. You knew shit was about to get real because Jack drops the assault rifle and just goes on a rampage with just a handgun and a knife. I talked about this last week but, Jack’s Impossible White Man powers are at 100% effectiveness when he’s armed only with a pistol. Jack even kills one guy with a meat cleaver. A MEAT CLEAVER. He clears the rest of the boat, finds Cheng, beats him in hand to hand combat then calls the President to present the proof he needed to prevent World War 3 from happening. Jack doesn’t even wait to make sure the Chinese President called off his assault. As soon as the CIA tech said he got the facial recognition on Cheng, Jack hangs up then beheads Cheng….WITH A SWORD. With one swing. Say what you want about this shortened 24 season but, you can’t say we didn’t get few Jack Bauer instant classics. 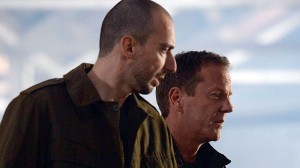 Fuck her...she's been annoying all season...we can ride out now, get some burgers, smoke some weed then get some bitches...

I’ll be honest, I wasn’t a fan of the very end with Jack. I get what they were trying to do but I think it was forced. I knew at the end of this season Jack would either be dead or captured by the Russians. But the way they did it in this episode just didn’t do it for me. How did the Russians even know Jack was at the docks? And how did they know Chloe was in that building? And having just stopped World War 3 (and did it on good terms with the British & US Government), one call from Jack and Chloe more than likely would have been released. Especially with the information about Anatol. I just feel like they wanted to end the episode and they were running out of time and needed to do something with Jack. I’ll be honest, the very end of the season finales for 24 always make me have mixed feelings. I feel like they write a great season finale then get to the end and are like “wait…what do we do with Jack?” Now in fairness, regardless of how I feel about HOW they got to the part where Jack turns himself over in exchange for Chloe, I believe that it was closure for Jack. Chloe really is his only friend and with Audrey dead, there really wasn’t anything left for Jack. Everything he did this season really was for everyone else. This last act was Jack’s final sacrifice and it definitely fit with the character this season.

Thoughts on the whole season:

I was lukewarm on the idea of a 12 episode season of 24. A few years had passed and I wasn’t even sure if a full 24 episodes season would work these days. But I have to say 24 Live Another Day was not only very enjoyable and entertaining but it was a nice change. Sure, the general format and writing was the same but the shortened schedule meant less time on fillers and less complicated plots. Sure at times this meant that things seemed a bit rushed but they also crammed in a lot in 12 episodes. I’m actually pretty impressed. To me this season was on par with the best seasons of 24. The thing I liked the most was that Jack was a man on a mission and there wasn’t a lot of time spent on personal issues with him. The addition of Yvonne Strahovski as Kate Morgan was also a huge positive for me. Moving forward I’m hoping they allow the character of Kate Morgan to become the main character and follow her. There’s always a chance Jack could come back but I think the course has run with that character and there’s a lot we didn’t explore with Kate Morgan that we could. One thing I really liked about this season was that Jack for the most part was autonomous for most of the Season. Even when he was “working with” the CIA, they were just following his orders. I loved that change because it cut out a lot of annoying bullshit. With Kate seemingly quitting, it would be awesome to see her in the same kind of role. I’ll be honest, with all the building up they did with Kate, I will be disappointed if we don’t get a Season 10 focusing on her.

I didn’t really have any issues with this season. There were plenty of “Jack Bauer” moments. Throwing Margot out of the window and chopping off Cheng’s head with a sword gotta both be Top 10 (if not higher) Jack Bauer moments. This season wasn’t boring at any point. Any real issue with this season would be said about any season of 24 (predictability, incompetence in government, etc).  I do wish we got less Chloe and more of Belcheck but that’s just me. All in all, I’m pretty happy to have been wrong about 24 Live Another Day. I hope they bring it back for another season soon. Despite the ending with Jack, I give this episode an A+ and the overall season an A-.